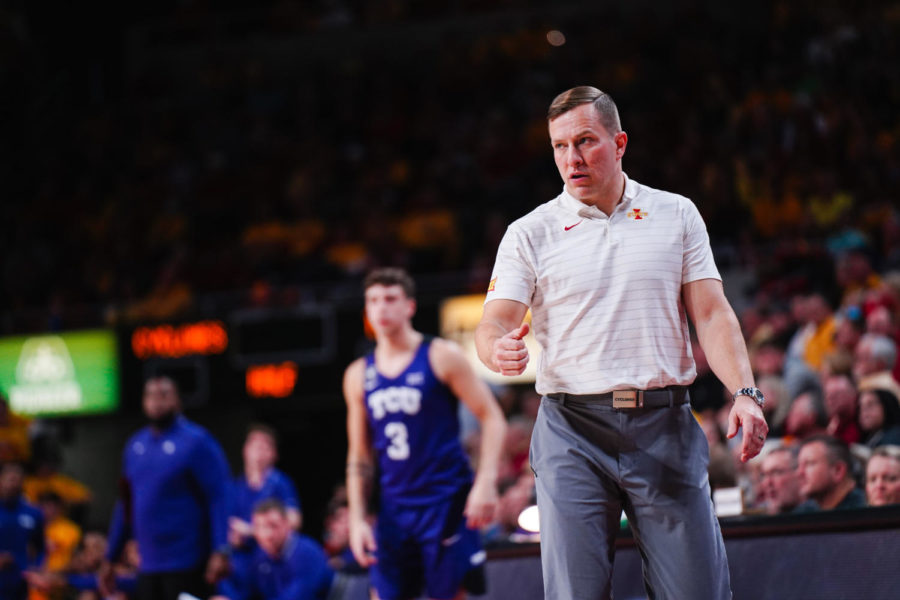 Iowa State Head Coach T.J. Otzelberger watches the Cyclones during their 59-44 loss to TCU on Jan. 22

It was a typical night at the office for Iowa State men’s basketball — and not the type you gather around the kitchen table to tell the family about.

But the loss in Morgantown was nothing out of the ordinary for T.J. Otzelberger’s group, especially on the offensive end of the floor.

As Iowa State went the first five minutes of the second half without a made field goal, one of the ESPN+ commentators described the Cyclones’ situation as, “the snowball keeps going downhill for Iowa State.”

The snowball rolled on until Iowa State made its first made field goal of the second half at the 14:37 mark. And while the second half started rough, the first half for the Cyclones was another slog to score.

Iowa State’s first two possessions of the night were turnovers: a turnover from Tristan Enaruna and an offensive foul from Tyrese Hunter.

And in a matter of the first seven minutes, Iowa State was down 18-5 to start the night.

Iowa State trailed the entire game, entering halftime down 39-28, and let West Virginia put up 40 points in the second half on its way to victory.

Tuesday was the ninth game for the Cyclones this season where they’ve shot under 30 percent from three and the fifth conference game shooting under 40 percent from the field.

The Cyclones did make things interesting in the final seven minutes of the game after cutting West Virginia’s lead to eight with 3:52 left to play.

But the Big 12’s ninth-ranked offense dug too big of a hole to overcome, even with West Virginia’s season-high 20 turnovers.

Caleb Grill provided a three-point spark off the bench for the Cyclones to finish with 12 points (4-6 from three) to try and supplement another off night for Izaiah Brockington.

Iowa State’s leading scorer ended with 11 points on 4-12 shooting in 32 minutes of action.

While Iowa State’s offense as a whole struggled per usual, freshman guard Tyrese Hunter did his best to make the Mountaineers sweat in the final ten minutes of the game.

Hunter finished with a career-high 22 points on 7-15 shooting to go with four assists.

Hunter did have six turnovers, but was 6-7 from the free-throw line.

For data split fans, Hunter’s three highest scoring nights in conference play have come on the road (22 at West Virginia, 20 at Oklahoma, 18 at Oklahoma State).

The Cyclones have seven games left to get Hunter more chances to develop and bring some second level of scoring to an otherwise lost offense.

Otzelberger has made it clear in recent weeks the Cyclones have to play their style of basketball to win. “There’s no option” to change an approach as he has put it.

But when asked about how the Cyclones can generate any sort of offense on nights where the shots aren’t falling, the first-year head coach of the Cyclones said it starts by attacking the rim and driving with intentionality.

Not much of that was present until the tail end of Tuesday’s loss.

Iowa State went 12-22 from the foul line. Sixteen of those attempts came in the second half for Iowa State.

West Virginia, on the other hand, did work on the free throw line. The Mountaineers ended the game 25-29 from the charity stripe.

Tuesday night was only the second time Iowa State has gone to the free throw line more than 20 times in Big 12 play.

With shooting at a loss right now for the Cyclones, putting priority in the paint would seem like the next best option. That wasn’t the case Tuesday.