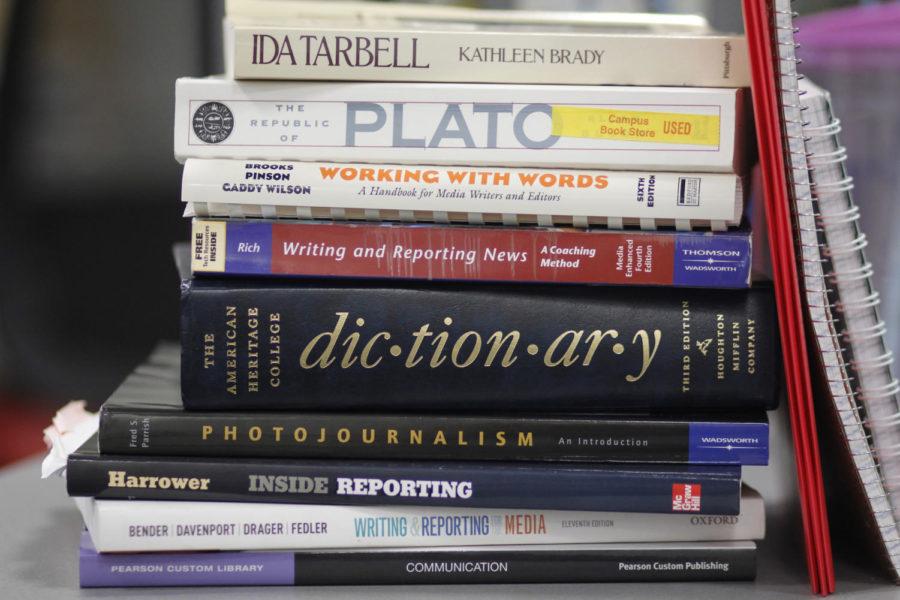 One way to prepare for the upcoming semester is by purchasing your textbooks over Winter Break.

It is no secret that textbook prices are high as far as many students and administrators are concerned. Despite the relativity of the perception of cost, a tangible reality exists: some students cannot afford textbooks listed as required for class.

Some at Iowa State are working to make textbooks more accessible for all students.

Heather Dean, course materials manager at the Iowa State University Bookstore, is a three-time winner of the Excellence in Course Materials Management award from the Independent College Bookstore Association for her efforts in textbook affordability at Iowa State.

Dean’s passion for textbook accessibility stems from her time as a student at Iowa State, where a textbook can run as high as $347.

“I graduated from Iowa State in 2006 and so I was sort of that post-9/11 student, went to school here during the recession, tuition increases were huge, like 18 percent one year,” Dean said. “Affordability is something that’s important to me. I was on my own to pay for college. I came to Iowa State when it was a public school that was supposed to be affordable with tuition and everything.

“I still left with a significant amount of student debt.”

Dean is driven to find less-expensive alternatives for students because she does not want them graduating with as much debt as she had.

Dean was part of the effort to allow students to charge textbooks to their U-Bill and allow them to make payments into the semester, as they do with tuition.

While Dean said the University Bookstore has made great strides in offering used books for sale and rentals, a tightrope is being walked in negotiations with instructors and publishers.

Dean has worked with instructors on several fronts to make educational resources more available to students. Dean said the University Bookstore speaks to instructors who list books as “required,” even though there are not required readings in them to change their classification to recommended.

While Dean said not all instructors have been willing to accept these changes, progress has been made and efforts are ongoing.

“We try to champion these initiatives as soon as they become available to us,” Dean said. “We take them and run with them right here at Iowa State and set an example for the rest of the country to follow suit.”

Dean has been instrumental in bringing Inclusive Access resources to Iowa State. Inclusive Access textbooks are charged to a U-Bill automatically at a fraction of the cost of other textbooks and are already in Canvas when each student starts the class.

Dean is also a supporter of Open Educational Resources (OER) and is working with the library to ensure students are aware when their required readings can be accessed through the library and instructors creating a course are aware of all options for providing course materials.

“As Open Educational Resources has really entered the course material world in making sure that we’ve got credible materials but at no cost, or even sometimes low-cost, we’re working together on that,” Dean said.

“This is a talk that we started among all the Big 12 institutions, specifically Iowa State and West Virginia University are working together but they’re pretty far ahead of us on this,” West said. “I’ve really bounced a lot of ideas off them as far as how we do this.”

West said many instructors are unaware of OER’s, but he feels there’s incentive for instructors as well as students.

“But the really interesting thing is there is this nation-wide or even global network, at this point, of open resources that faculty at other institutions can archive, download it, [and] edit it for their particular course,” West said.

West said the process is ongoing and not all instructors have been immediately welcoming of OER’s.

“It’s really kind of been a movement and it’s a hard one because I think the biggest problem right now is our faculty aren’t aware of it,” West said. “They don’t really know what open resources are and I think a lot of them see a threat as far as getting rid of academic journals or these things that are very prestigious that we’re all kind of … attached to.”

Despite some concerns about losing memberships from academic journals and divesting from publisher-provided materials, West feels OER’s are worth pursuing.

“I think any way we can address costs of attendance is a good option,” West said.