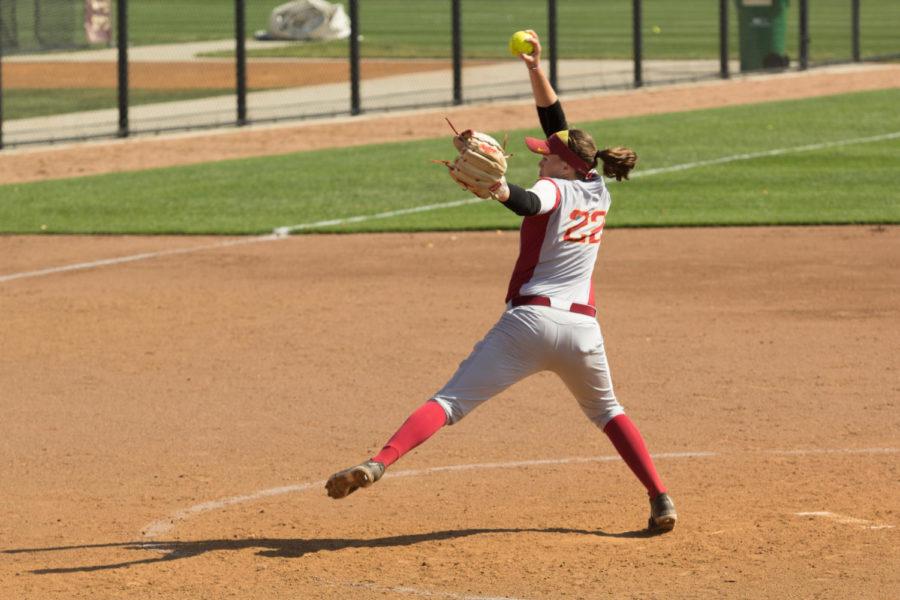 Sophomore Pitcher Savannah Sanders winds up for the pitch Sep. 23. The Cyclones defeated the Kirkwood Eagles 9-1.

On the second day of the Houston Hilton Plaza Classic, the Cyclones played their third game of the tournament against Lipscomb.

The Cyclones are coming in after splitting games on the first day of the tournament, losing to Northwestern by a single run, and defeating Lipscomb 6-1.

They faced Lipscomb for the second time and things got off to a slow start in comparison to their last encounter.

Lipscomb opened up the scoring in the top of the first when the Lady Bisons infielder Hannah DeVault reached on an error by Cyclones second baseman Sydney Stites and allowed a fellow teammate to score unearned.

Starting pitcher Savannah Sanders was pulled in the top of the fourth inning, and Emma Hylen came in to relieve her. Hylen had previously pitched a strong game against Lipscomb yesterday, going seven innings, only giving up one run on five hits to go with five strikeouts.

She played for four innings, not allowing any runs, and added four strikeouts but the Cyclones offense was not able to accumulate anything in the rest of the innings.

Sanders now falls to 3-5 on the season.

The Cyclones accounted for no hits until the fourth inning, where Sally Woolpert doubled to left field, but nothing came from it, as Kaylee Bosworth struck out swinging.

Taylor Nearad singled through the right side in bottom of the fifth and stole a base to get to second base. But neither Nychole Antillon or Jackie Chairez was able to bat her in.

The Cyclones will now rest and play Houston at 7 p.m. tonight.