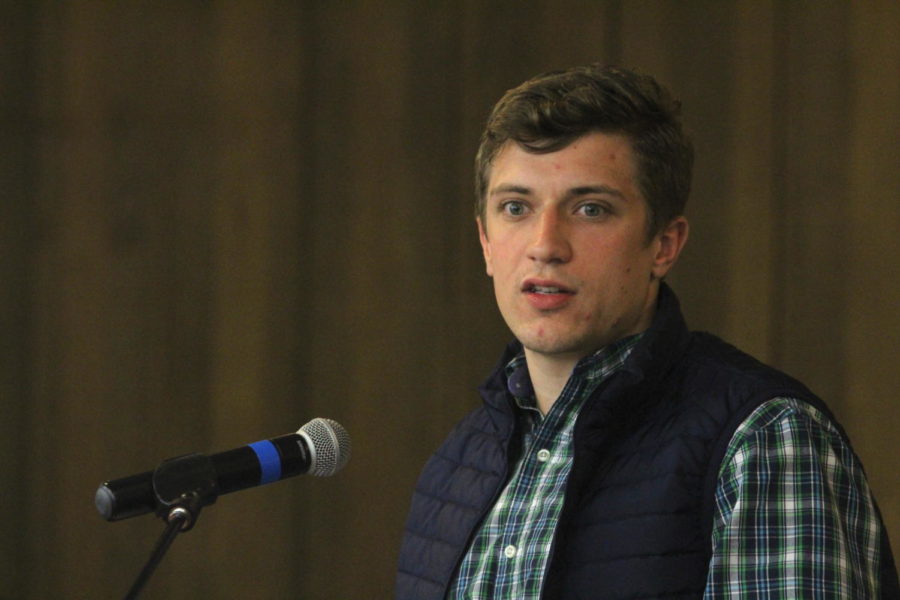 Student Government President Cole Staudt speaks to the student government senate regarding the agenda for the meeting and about cuts in funding to the university in the Campanile Room of the Memorial Union on March 8.

A medical amnesty bill, SF 415, which is backed by Student Government, passed unanimously through the Iowa House Judiciary Committee.

Two years ago, former Student Government President Cole Staudt and current President Cody West set out to pass a bill that would protect underaged people from legal implications if they were drinking and needed to call for medical assistance.

Passing a medical amnesty bill was a campaign promise the two made when they ran for Student Government.

Those protected by the bill would be individuals who “experience a medical emergency caused by the illegal possession or consumption of alcohol, such as underage consumption, open container or public intoxication,” according to a medical amnesty proposal.

Staudt told the Daily in April waiting until the next session will allow legislators and constituents time to digest the bill and it will hopefully get passed early in the next cycle.

“For two years, @isustugov has been working to get S.F. 415 passed to protect students who become incapacitated due to alcohol and those who call for emergency services on their behalf. I am so happy to report that S.F. 415 passed the Iowa House Judiciary Committee today with a UNANIMOUS VOTE,” the post said.

Staudt has seen firsthand the decision one must make when they fear facing legal repercussions, but have a friend who needs medical attention.

With a friend on the verge of alcohol poisoning in his care, Staudt was faced with a decision: Get his friend medical attention and face the police or avoid the hospital and put his friend’s life in danger. Staudt, like many other students, went for the latter.

The night didn’t end with Staudt putting his friend to bed, though. A simple decision to stay up and watch Netflix may have saved his friend’s life.

With his friend sleeping below him, Staudt eventually heard a gurgling sound as he was lying on the top bunk. Realizing his friend was choking, Staudt jumped down, put him on his side and saved his life.

About three years later, when Staudt and West were discussing policies to campaign on, they looked into passing a medical amnesty bill, and the idea stuck with Staudt because of his experience.

“Once I kind of made that connection to my personal history with this policy idea and we looked into it and were like, ‘Wow. Why haven’t we done this before,’” Staudt said.