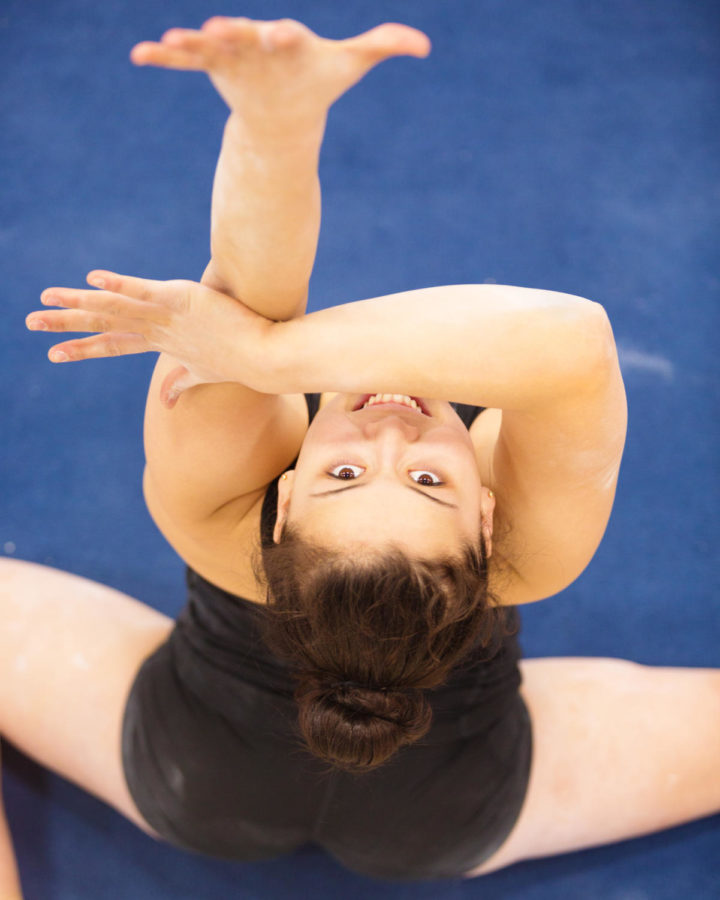 Freshman Ariana Orrego was the first gymnast to compete for her home country of Peru in the 2016 Rio Olympics.

To understand Ariana Orrego’s experiences, you have to start in Brazil, under the bright lights, between the never ending green walls, on the world’s biggest stage — the 2016 Olympics in Rio de Janeiro.

But to understand who Ariana Orrego is, you have to start here, in Orrego’s 10 a.m. class — Agricultural and Biological Systems Engineering 160, officially known as ‘Systematic problem solving and computer programming.’

Dozens of students sit in on the lecture inside Sukup Hall, but Orrego said she doesn’t think any of them know who she is or what she’s accomplished.

They don’t know that just 18 months ago she made history as the first female gymnast to compete at the Olympics for her home country of Peru. She isn’t going to tell anyone, either.

“I don’t really like saying it,” Orrego said. “It feels weird.”

When she is asked to introduce herself in classes, she just says her name and that she’s from Peru. The single greatest accomplishment of her life doesn’t come up.

Orrego speaks English well, but she chose to major in engineering, in part, because she doesn’t have to do much talking, and that’s the way she likes it.

Her red Nike backpack, the one most athletes on campus wear, might draw a few eyes but Orrego herself goes unnoticed.

A far cry from the pool of reporters and fans who tracked her flight and were waiting for her in her hometown of Lima, Peru, when she returned from the Olympic Games. The Olympics were only the start of the legacy Orrego started to build in Peru.

This past October, The Ariana Orrego Gymnastics Cup debuted in Lima. The international event, named in Orrego’s honor by her elite coach Gustavo Moure, handed out 3,000 medals to gymnasts from all over the world.

After Orrego was broadcast at the Olympics to spectators in Peru, the excitement around the sport increased, resulting in a brand new national team gym with six floors, a large improvement from where Orrego trained growing up.

But here in class, the most famous female gymnast in Peru’s history sits in her seat learning about the basic principles of statics, projectile motion, conservation of mass and energy, and electricity and magnetism. She quietly blends in with her fellow Iowa State students, and she wouldn’t have it any other way.

Orrego was competing in Peru when she was invited by coach Moure to take part in one of his international meets in Virginia Beach, Virginia, in 2011. She had already been a part of the Peruvian National Team since she was 10, but this would give her an opportunity to compete in the United States.

She competed at the meet and stayed an additional two weeks to train with Moure. The training was excellent, better than anything she had received in Peru. Orrego returned to compete in the meet in 2012 and 2013 before Moure made a proposition. He told her she should move to Virginia if she wanted to keep improving.

At 14, Orrego loved the idea. The improvement she experienced when she spent time in Virginia was substantial. Her parents were hesitant.

“If I really want to make it,” Orrego said she told her parents. “I have to do it.”

At 15, Orrego left her home to dedicate her life to the only sport she’s ever known.

“The hardest thing to do was leaving my family,” Orrego said.

In Virginia, she moved in with a host family and became home schooled. She could understand what everyone was saying in English, but didn’t always know how to respond.

She had gymnastics practice, at times, for eight hours a day, but she loved it. Orrego won eight Virginia State championship titles, but that was only the beginning.

She participated in the 2014 World Championships where she qualified for Worlds 2015 which led to her qualifying for Rio in April of 2016.

She had to be in the top 24 gymnasts in order to make the Olympics, and she was in good shape with one event left. As long as she “landed on her feet,” she would make it.

“I started crying,” she said. “But I was happy crying.”

It was the best feeling of her life, she said, along with the the opening ceremonies a few months later.

She saw Michael Phelps and Serena Williams. She took pictures with Rafael Nadal and the U.S. women’s gymnastics team.

“Sometimes I’m like ‘did I really do that?’” Orrego said. “Everything happened so fast but I’m glad I made it.”

She also saw someone who would help her realize her second biggest accomplishment.

The two had met before. Medeiros Savage was close to accepting the Iowa State job and told Orrego the Cyclones would be interested if she decided to go compete in college, a route she didn’t know if she was planning to take.

“I mentioned to her at some point in time,” Medeiros Savage said, “‘If we could have you at Iowa State, that is something I would like you to think about. The doors are open and we may come up with a scholarship that may help you.’”

Orrego came to visit and called her mom after it was done.

Iowa State was where she wanted to be.

“She has the potential to be an All-American on a couple of events,” said Iowa State coach Jay Ronayne. “She could be a superstar all-arounder. I see her graduating with a whole lot of accolades.”

Orrego has been all over the world thanks to gymnastics. From the Olympics to World Championships to competitions when she started doing gymnastics at 5-years-old, she’s always been competing on her own. That’s not the case at Iowa State.

She’s a part of a team now, and that’s just the way she likes it.