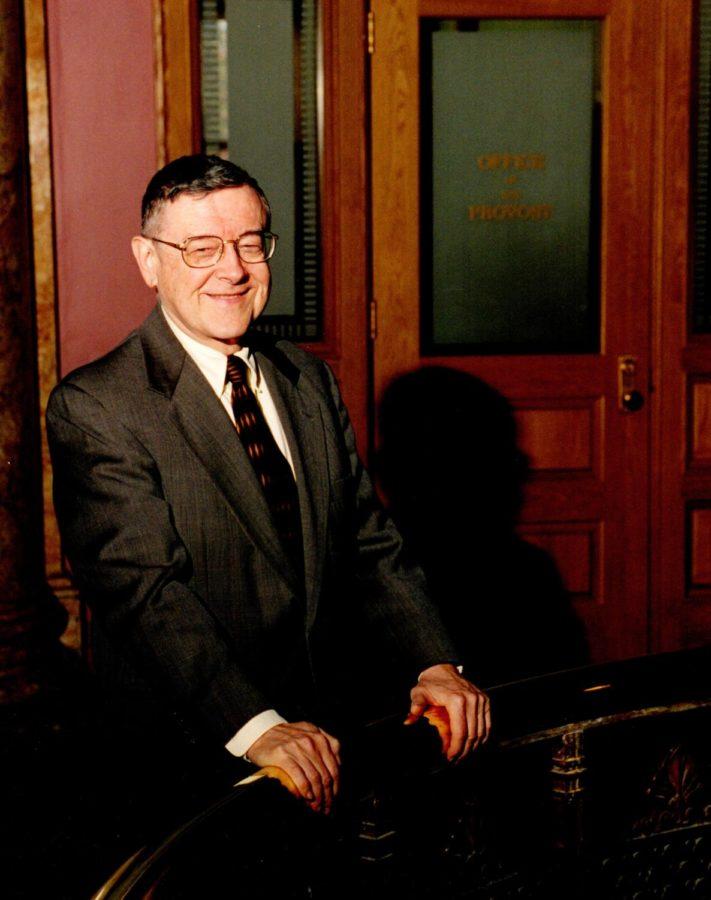 Former Associate Provost Ed Lewis was known as a listening ear and advocate in his more than 40 years at Iowa State. Lewis died at age 84 in Minneapolis on Thursday.

Some of his notable accomplishments at Iowa State included establishing the University Honors Program, advocating for women and being a champion of change whether that was through big initiatives like policy creation or helping people find common ground.

Lewis served in several capacities in his time at Iowa State, starting as a psychology faculty member in 1957. At the time of his retirement in 1998, he was associate provost and psychology professor. But he was asked to come back part time in the university’s Ombuds Office from 2006 to 2008.

“As Iowa State grew and evolved, he was a part of that process,” said Warren Madden, former senior vice president of business and finance, who retired in 2016.

Catalyst for the University Honors Program

Some would say Lewis’ passion for students was best shown in the work he put into the Honors program.

Lewis believed that students should be exposed to a variety of topics outside their major to advance their world views, said Elizabeth Beck, retired director of the University Honors Program.

The University Honors Program was established in 1960 and Lewis became the Chair of Honors in 1966, according to the Honors website. He created Honors Seminars, which are still part of the program today, meant to “encourage breadth of intellectual experience.”

Under his leadership, the Honors Program branched out to the colleges. He also helped establish the Freshman Honors Program and created “an intensive training” for those leading seminars for first-year students, according to the Honors website.

Even with his busy schedule in the years serving as associate provost, he still led weekly leadership classes for the sophomores who taught the first-year honors seminars. His own leadership style was to listen first and then make recommendations without telling people what to do, Beck said. But when something needed to be done, he got it done.

One time an international student was in a bind because the student had already booked the flight home and a professor moved the final exam to a date after what was listed on the syllabus, Beck said.

That didn’t fly with Lewis.

“Dr. Lewis got that changed right away,” Beck laughed.

The honors program, which began with 40 students, now has 1,400 students.

In his time with the Counseling Center as a psychology professor, he noticed that many of the materials about seeking careers or interest tests were geared toward men, according to University Archives. Lewis decided to write about this and eventually created a proposal to start the University’s Committee on Women.

The committee was established in 1972 and was one of the many activities Lewis was a part of to advocate for women. Lewis served on the Governor’s Commission on the Status of Women under Gov. Robert D. Ray. Lewis also supervised the Women in Science and Engineering program for a time.

“I think that it certainly became more acceptable for women to be in non-traditional fields,” he said in a 2004 interview about changes in opportunities for women during his time at Iowa State. “Certainly in math, or the engineering and science area, the fact that we were actively recruiting women students for those areas…”

Much of his research as a psychology professor focused on gender equity.

During his time at Iowa State, Lewis led the university through several changes. His daughter, Iowa State alumna Mynda Lewis, said he helped lead the university in its transitions from quarters to semesters. At various points he oversaw the Lectures program, Career Services, the Instructional Technology Center and the International Students and Scholars Office.

“He amazed me with his breadth of knowledge,” said Brenda Behling, director of academic policy and personnel in the provost’s office.

Lewis hired Behling into the provost’s office, where she still works today. She said he was known as the university historian and policy expert. At the time of his retirement, he had written or had a hand in shaping almost every policy the university had on file. In addition to his love of working with students, he was an advocate for faculty and staff.

“His perspective was always a fair perspective and he was passionate about helping people,” Behling said.

Lewis was adept at personnel issues and brought a solutions-oriented mindset to constituencies like Faculty Senate. He was able to organize policies in way that was very challenging before computers and the internet was widely used, Madden said.

“He was a good university citizen — he contributed, he participated,” Madden said. “He left Iowa State in a better state.”

Mynda Lewis said her father rarely used his position for power. Although she’s been told that when Hilton Coliseum flooded in 1993, there was talk of not having a graduation ceremony. To that alternative, Lewis said, “No, my daughter is graduating.” The graduation was held at Stephens.

Visitation will begin at 1 p.m. Saturday at the Lord of the Life Lutheran Church, 2126 Gable Lane in Ames and the funeral will begin at 2 p.m. Burial will follow church services at the Iowa State University Cemetery at 2637 Pammel Drive.

The family asks that rather than flowers, individuals send memorials to either the Iowa State University Foundation for “The Ed and Nancy Lewis International Scholarship for Honors” or Our Saviour’s Lutheran Church at 2315 Chicago Avenue South, Minneapolis.

Lewis is survived by his four children, Elizabeth of St. Paul, Jon of Minneapolis, Kendrick of St. Paul, and Mynda of Woodbury, Minn.; many grandchildren; and by a sister, Marilyn Drunasky of Anaheim, Calif. He was preceded in death by his wife and his parents.