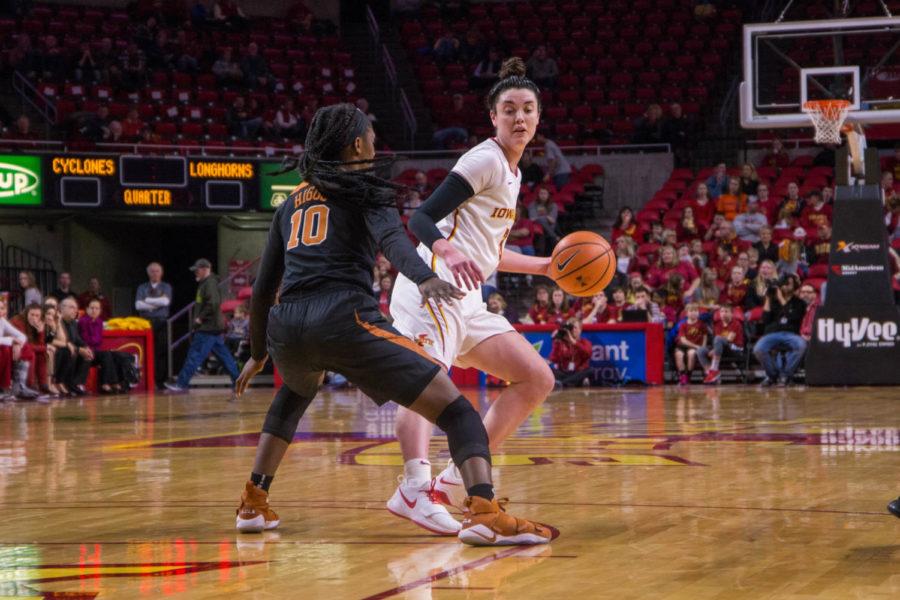 Senior Emily Durr looks for a pass on the court during their game against the Texas Longhorns on Feb. 24 at the Hilton Coliseum.

Iowa State ended its regular season at 13-16 after a 65-56 win Tuesday night against the Kansas Jayhawks.

The result leaves the Cyclones as the No. 7 seed in this week’s Big 12 women’s basketball tournament, which takes place in Oklahoma City, Oklahoma. Iowa State will take on the Texas Tech Red Raiders, a team the Cyclones swept in conference play.

Now, after that quick update, here are three takeaways from the Cyclones’ victory at Phog Allen Fieldhouse.

A home away from home

The Cyclones sure love a road game this season, don’t they?

Iowa State’s win in Lawrence, Kansas, on Tuesday officially gave the Cyclones a 5-4 record away from home in conference play, a feat they have not accomplished since the 2013-14 season in which they also went 5-4 on the road in big 12 play.

That season ended in an NCAA Tournament first round loss to Florida State. This year, the Cyclones will have no such opportunity, barring a miracle run in the Big 12 Tournament this coming weekend.

However, Iowa State wasn’t really supposed to get there this season. The Cyclones’ vast amount of inexperience led many to believe that this would be a rebuilding year. That’s certainly been the case, but that only makes the Cyclones’ strong road performances more impressive, if not confusing.

Four of the five road wins, including the Jan. 30 upset of then-No.19 Oklahoma State, were won by nine points or more.

But why are the Cyclones so good away from Hilton?

A lot of that may be down to their togetherness as a unit. The Cyclones have often played with more cohesion on the road, and coach Bill Fennelly has said that the team feels less pressure away from home.

Iowa State has had issues on the defensive end of the floor this season, mainly in the way of post defense. Until the emergence of redshirt junior Claire Ricketts towards the back half of the schedule, Iowa State had little to no interior defense when junior center Bride Kennedy-Hopoate wasn’t on the floor.

Against Kansas, however, every single Iowa State big made contributions on the defensive end. Despite getting outscored in the paint, the Cyclones’ bigs did a good job of altering shots and making the Jayhawks work for their baskets.

The Cyclones played a very solid defensive game across the board, holding Kansas to 39.2 percent shooting for the game. The Jayhawks shot only 4-for-21 from 3-point range.

Iowa State’s ability to force turnovers contributed to their victory as well. The Jayhawks turned the ball over 15 times, contributing directly to 14 Iowa State points. The Cyclones only had three steals, but they pressured the Jayhawks into making mistakes in the half court and took full advantage.

Going for a career-high in your final regular season finale is certainly one way to end your career, and while Emily Durr still has at least one game left to play for the Cyclones, it’ll be hard for the senior from Utica, New York, to top her performance Tuesday night.

Durr went 9-for-20 from the floor and scored 27 points in 38 minutes, chipping in five assists and three rebounds as well.

Durr started brightly and had nine points at the break on 4-for-10 shooting, but in the second half she took control of the game and carried Iowa State on the offensive end.

Beginning the third quarter with two straight close-range jumpers, Durr scored 11 of the Cyclones’ 17 third quarter points, outscoring the entire Jayhawks team by herself and pushing Iowa State to a 48-42 lead.

She capped off her stellar offensive night by hitting a dagger 3-pointer with 35 seconds remaining. The basket pushed the Cyclones’ lead to eight and put the game out of reach.

Durr’s impressive display was her fourth 20-plus point game in her last five, with 21 points against Oklahoma State, 22 points at TCU, and a 20-point game against Texas Tech.

Emily Durr is, without a doubt, ending her Iowa State career with a flourish.

Junior guard Bridget Carleton scored 17 points and had a career-high seven assists on Tuesday, giving her 347 points in Big 12 play.

That mark breaks the Cyclones’ single-season record for points in conference play (the previous record was 333 points, scored by Lindsey Wilson in 2002-03).

Carleton has scored 545 points in 29 games this season, ranking sixth in school history for points in a single season. She is 12 points behind Kelsey Bolte, who is fifth, with at least one game left to play.

Carleton continues to make her mark in the Iowa State record books.