The Freedom Winds to Perform at City Auditorium 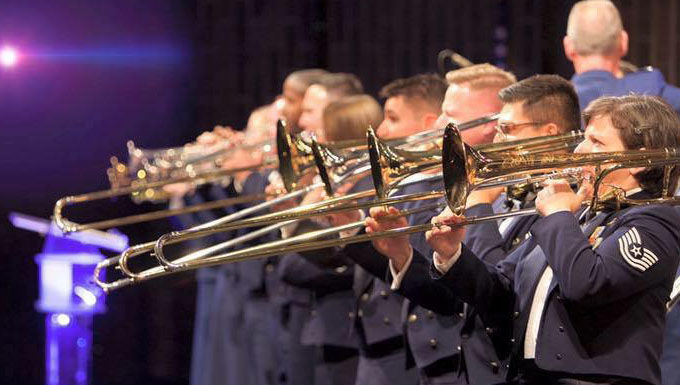 Courtesy of The United States Air Force Band of Mid-America

“To fly, fight and win in air, space and cyberspace.”

“The Air Force Band of Mid America’s mission is to provide free, high-quality entertainment for communities all across America” said Craig Kaufman, the Auditorium, Bandshell and Community Center Manager of Ames.

The Freedom Winds, one of the 9 ensembles of the United States Air Force Band of Mid-America, will play here in Ames on Wednesday. Unique from other traditional quintets, the Freedom Winds display music from various cultures around the world and from different time periods.

The ensemble focuses on communicating “esprit de corps” and honor to fellow Airmen and the country. They focus on installing patriotism, build partnerships, enhance the reputation of the Air Force and the United States, and demonstrate American values to the world.

“These concerts are great opportunities to show appreciation for the armed forces” Kaufman said.

Located out of the Scott Air Force Base in Illinois, the Air Force Band of Mid-America’s performances range over a 10-state region here in the Midwest, including Iowa, Illinois, Wisconsin and Minnesota.

Lt. Col Michael James Willen, native of Yuma, Arizona, is the Commander of the United States Air Force Band of Mid-America. Willen’s responsibilities include organizing, training, equipping and deploying over 60 Airmen Musicians in the region.

The band performs over 400 missions a year, supporting the U.S. Air Force and Air Mobility Command outreach and engagement priorities to help increase the public’s awareness of the airpower and sacrifice of Airmen. With these performances, they can build relationships with the public to enhance the reputation of the Air Force.

Master Sergeant Peter Dahlstrom, a Columbus, Ohio native, is the horn player in the ensemble. He also serves as the Noncommissioned Officer in Charge of the Midwest Winds. In addition to the Midwest Winds, Dahlstrom also acts as Drum Major of the Ceremonial Band and the Director of the Media Shop.

Master Sergeant Jennifer A. James performs in the ensemble on flute and piccolo. James also serves as Noncommissioned Officer in Charge of Freedom Winds.

The concert will be held at the Ames City Auditorium, a venue that is “insanely under-used” said Kaufman. The venue hosts so few events per year. Hosting 881 people, the auditorium is “the perfect size and in the perfect location for the community” said Kaufman. “I was excited about all of the possibilities [for the auditorium] when I took my position.”

The Freedom Winds Ensemble will perform a free concert at 7 p.m. Wednesday, February 7 at the Ames City Auditorium. The concert is free and open to the community.

However, reservations are requested. For more information on the concert or to reserve seats, contact The Ames Parks and Recreation Community Center.