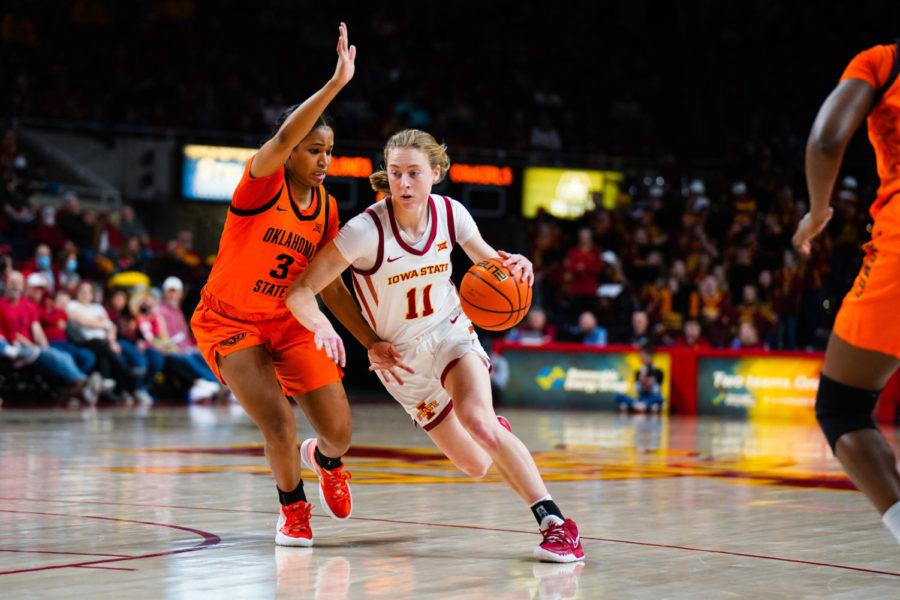 Iowa State women’s basketball built its winning streak to four as Emily Ryan led the team to a 76-58 victory over Oklahoma State on Saturday.

The Cyclones took control of the game early with strong shooting and brought it along all the way to the finish. Iowa State finished the game shooting 10-22 from three and 27-55 overall.

The 20-3 start matches the best start in program history for the Cyclones.

After shooting just 12-51 from three to start non-conference play, Ryan has found her shot from deep. A 6-6 night from three moved Ryan to 56 percent from distance in Big 12 play.

Ryan finished the night with 18 points on 6-7 shooting to go along with six rebounds and six assists.

Ryan has passed, rebounded and defended solid all season, so if she can keep up the rate that she is shooting at, Iowa State could make a deep run.

Cyclone fans are not the only ones that have taken notice to Ryan’s progression, as Oklahoma State head coach Jim Littell considers her to be one of the most improved players in the Big 12.

“You can tell that she’s a kid that lives in the gym,” Littell said. “She backs you down in the lane and looks around and if you leave her, she finds somebody.”

Iowa State head coach Bill Fennelly commented on Littell’s statement, mentioning that he believes her improvement is from the comfortability that she has gained through experience.

Flourish in the first

Iowa State has had some major first quarter success recently, and this game was no different. Shooting 11-13 from the field, Iowa State was able to build a 28-13 lead after a quarter of play.

This is the fifth consecutive game that Iowa State has led after the first quarter. Fennelly said that it is nice to get off to a hot start, but that is more of a result of strong play in many aspects of the game.

Ryan also mentioned that the team stays focused ahead of the game, which often times translates to the game.

“Obviously it is really important for us to continue to get good starts,” Ryan said. “Just gotta continue focusing on that, coming out ready every time and then keep winning quarters moving forward.”

The early scoring caused Emily Ryan, Lexi Donarski and Ashley Joens to finish the first half in double-digits for points.

Time to rest and recover

After this game, the Cyclones do not play again until Feb. 12. Fennelly has frequently stated that breaking the season into chapters has helped his team stay fresh, but this break could still be huge for his team.

Fennelly mentioned that he is prioritizing rest and recovery, giving the team Saturday and Wednesday off, with short, light practices on Monday and Tuesday. On Thursday, he plans to begin game prep for the upcoming game with TCU.

Emily Ryan agrees that this break is an opportunity for the Cyclones to regroup for their next chapter.

“It will be good for us to rest our bodies up, get refocused for the remainder of the Big 12 schedule. It’s a grind, so having a little time to breathe is going to be important for us,” Ryan said.