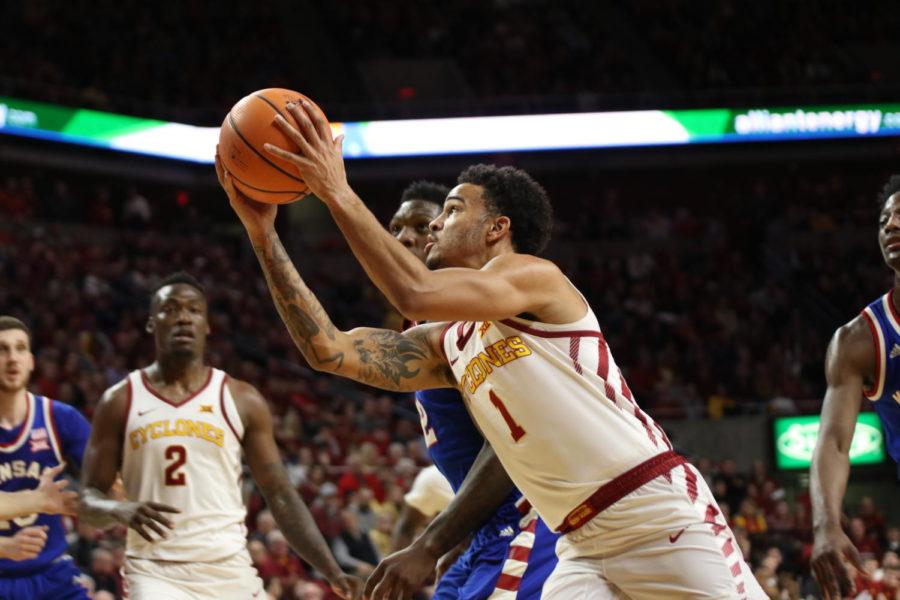 Iowa State junior Nick Weiler-Babb prepares to lay the ball up after driving during the first half against Kansas.

Newman led No. 13 Kansas in points with 10 going into the half as the Jayhawks had a 39-34 lead. Kansas keep that lead in the second half resulting in an 83-77 win for the Jayhawks.

Cameron Lard led the Cyclones with 11 points at the half and finished out the game with 19 points, 11 rebounds and two blocks.

Zoran Talley Jr. and Nick Weiler-Babb also contributed with 15 and 14 points respectively. This was the first time Weiler-Babb played since the Tennessee game on Jan. 27.

He only played 22 minutes, but was effective with five assists and eight rebounds.

Newman wasn’t the only one that scored for the Jayhawks as guards Devonte Graham and Lagerald Vick also contributed from the 3-point line, especially in the second half.

Graham and Vick scored seven and three points respectively in the first half. They finished with 13 points and 16 points, combining for five 3-pointers from the floor.

Kansas’ big man Udoka Azubuike ended the game with 19 points, while going 9-for-10 from the field.

Iowa State will hit the road to Kansas State on Saturday for a noon game. the Wildcats are 17-8 overall and 6-6 in the Big 12.