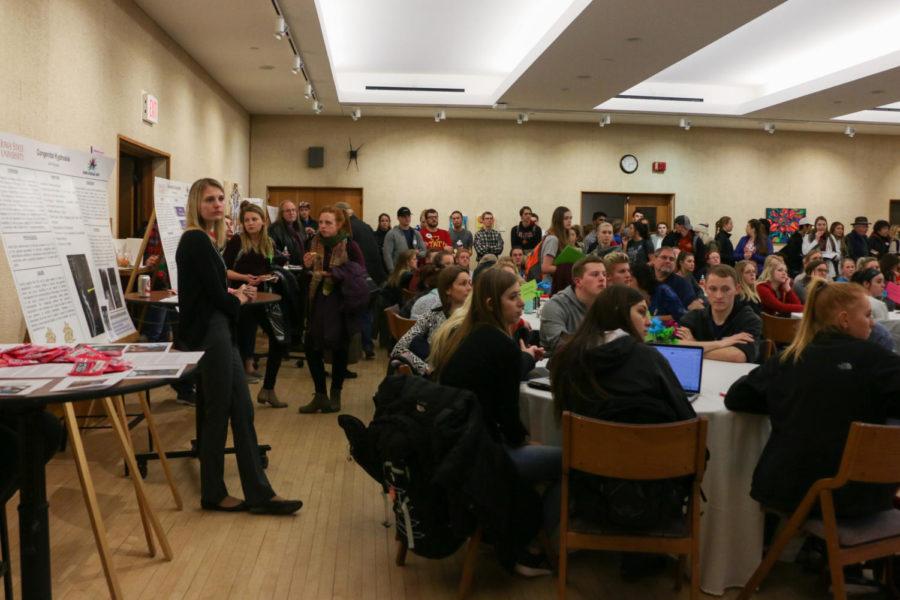 About 200 people attended Rare Disease Day on Feb. 28, which was held in the Gallery Room of the Memorial Union.

Scarlett Eagle ended her speech at Rare Disease Day with a call for action to a packed Gallery Room: If you plan on becoming a physician, take your patients’ symptoms seriously.

Speaking of her own experiences in the process of being diagnosed with Ehlers-Danlos Syndrome hypermobility type (hEDS), Eagle urged those pursuing degrees in the medical field to not tell patients their conditions are all in their heads — because it happened to her.

It took Eagle visits to over 10 specialists in four different states over four years to receive a diagnosis. She would often find herself in the emergency room with excruciating pain, but would find it hard to receive treatment because there wasn’t a concrete reason.

“When you’re in the ER, you’re either told that you’re drug seeking, it’s all in your head or that you’re doing it for attention,” she told the crowd of 200.

Eagle had almost given up hope. She knew the pain she was experiencing was real, but she began to believe she was causing herself this pain. She wanted answers so her legitimacy of pain would never be questioned again.

“It might seem peculiar that I was hoping to be diagnosed with a rare genetic disorder without a cure, but having a diagnosis allowed me to be taken seriously as a patient,” she said.

Patients will visit an average of 7.3 physicians over the course of 4.8 years from the time they first experience symptoms to when they receive an accurate diagnosis, according to research published in the Journal of Rare Disorders.

In addition to hammering down the need for an increase in awareness of rare diseases in the medical field, Eagle also spoke about how hEDS affects her daily life.

She explained the Spoon Theory — a neologism written by Christine Miserandino — to explain the idea of having to prioritize her energy.

Following her speech Eagle encouraged attendees to learn about the 10 different rare diseases that were represented at the event and to ask them questions.

Amber Caldwell, junior in child, adult and family services, was born with three vertebrae that had not separated. Essentially, the back of her spine was growing, and the front wasn’t, causing her spine to look like a wedge.

“Imagine a hunchback old grandma. That’s the easiest way to explain it,” she said.

She didn’t find out she had Congenital Kyphosis until she was in 7th grade. At age 16 she had surgery to help correct it, but continues to live with pain.

To help ease her pain, she uses a Transcutaneous Electrical Nerve Stimulation, or TENS, unit. A TENS unit eases back pain by sending an electric current across the skin and along nerve strands.