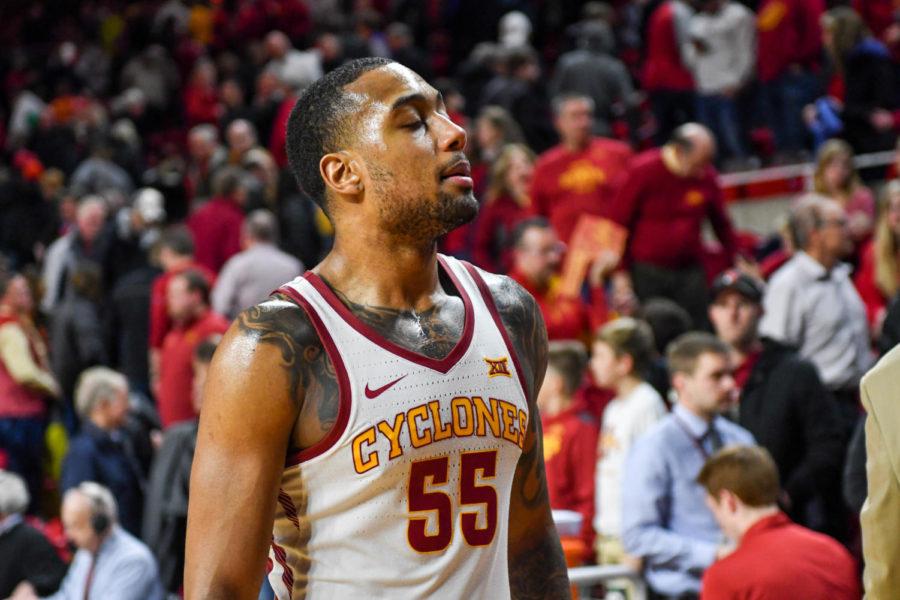 Senior Jeff Beverly takes a deep breath after their game against TCU on Feb. 21 at the Hilton Coliseum.

Ever since coach Steve Prohm took over the Iowa State men’s basketball program before the 2015-16 season, the Cyclones have followed a tradition of honoring their senior players after the buzzer sounded to end their final home game.

For the first time in the Prohm era, those festivities came after a loss. Iowa State fell to Oklahoma State on Tuesday by a final score of 80-71, dropping the team to 13-16 (4-13 Big 12) and putting a rain cloud over the usually pleasant senior ceremony.

“It’s easy to come out here after a big win against Oklahoma State when you’re on top of the world,” Prohm said to the crowd. “It takes a lot of character, toughness and grit to come out here and speak right now.”

And even after a tough loss at home to cap off a frustrating season, thousands of Cyclone fans stuck around to thank the players, none of which had been in cardinal and gold for more than two years.

The biggest applause, of course, came for Jackson. Prohm detailed the accomplishments from Jackson, ranging from his clutch dagger 3-pointer from the corner to win at Kansas last year to his leadership off the floor this season.

“It’s been a long journey, these two years for me,” Jackson told the crowd.

He talked about his journey from Milwaukee, living in 23 different houses in his life until he found a home in Ames. Jackson thanked the three Cyclone fans he saw at the airport recently after his father passed away earlier this month.

“Words can’t explain how much you guys mean to me and my family,” he said.

Jackson has had the biggest impact on the court of the three seniors. He’s currently at 92 made 3-pointers this year, just 10 shy of Dedric Willoughby’s record. Five of those bombs came tonight, but ultimately it wasn’t enough.

The Cowboys led for over 36 minutes against the Cyclones, who looked emotionally worn out for much of the night.

The three seniors all got to start in their final game at Hilton Coliseum, and for a brief moment, it looked like they might come out fighting. The Cyclones led, albeit briefly, for moments in the first 10 minutes.

But the lack of depth and the emotional toll of this season seemed to weigh them down.

And with only one regular season game remaining for this worn-down squad, the task at hand may be more difficult than expected.

“It’s just gonna take a lot of hard work,” Prohm said. “A lot of focus, a lot of effort, a lot of humility. That’s what it’s about at the end of the day.”

The Big 12 Tournament in Kansas City, Missouri, also awaits. Iowa State has locked up the last-place spot in the standings, meaning it will play Wednesday, March 7 at 8 p.m.

But Tuesday night, the loss on the court was not the only thing that mattered.

“I’m proud of those three seniors,” Prohm said. “Especially [Jackson]. That’s not easy to do, to step out in front of the fans and speak after a tough night.”