‘Let him cook’: Brockington puts 35 on Mountaineers in tight win 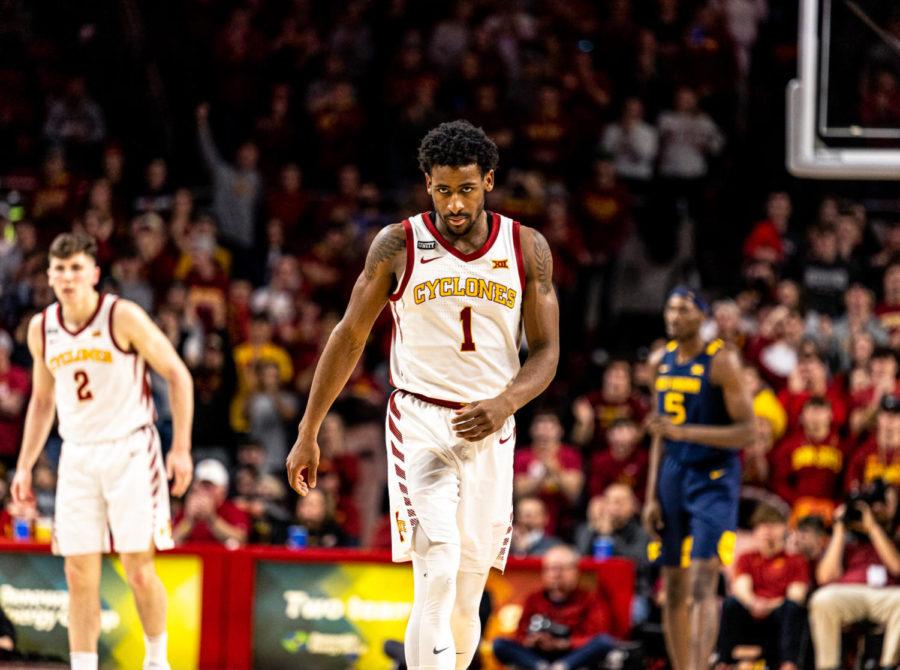 Iowa State guard Izaiah Brockington stares down a West Virginia player during the Cyclones' 84-81 win over the Mountaineers on Feb. 23.

AMES — T.J. Otzelberger didn’t start his postgame session with reporters talking about 47 combined person fouls, the shower of boos cast on officials all night or the boost in a NCAA Tournament berth after Wednesday’s 84-81 win over West Virginia.

He began with giving thanks.

“The gratitude I’m feeling to these two guys (Brockington and Kalscheur) sitting on each side of me couldn’t be more,” Otzelberger said.

And it was warranted.

Iowa State seniors Gabe Kalscheur and Izaiah Brockington put on a show over the Mountaineers, with the duo combining for 52 of the Cyclones’ 84 points.

Kalscheur had 17. Brockington had 35.

He was good. But there can be only one ‘Mr. Middie’ as Kalscheur said postgame.

Brockington lived up to the humorous nickname from his teammates and put together a performance that left Otzelberger lost for words throughout his postgame presser.

With his head coach running out of ways to describe what he witnessed from Brockington Wednesday, Kalscheur was more than happy to add his commentary of his fellow teammate’s night.

“Just let him cook. Just let him go to work. Call him ‘Mr. Middie’ for a reason,” Kalscheur said of Brockington.

“We wouldn’t be in the same position we are right now. He gave us a lot of key, energizing plays; he didn’t turn the ball over once and was very consistent from the field.”

West Virginia kept Brockington cooled off in the first half for the most part, denying his catches at the elbow more than usual and kept the ball out of the hands of the Cyclones’ best player.

Otzelberger said the Mountaineers knew where the Cyclones like to start offense and got into the body of Brockington and others to force bad passes throughout much of the opening 10 minutes.

The Mountaineers went on a 6-0 run in the final 45 seconds of the first half to lead 41-31 at halftime. Brockington walked into the locker room with 10 points on 4-7 shooting.

West Virginia out-rebounded ISU 19-9 at half, with the Mountaineers having as many offensive boards as the Cyclones’ rebounding total at the break.

But Brockington turned it up a notch in the second half, with his team in need of a win to make a NCAA Tournament run a clearer reality.

But the postseason wasn’t on Brockington’s mind as he climbed closer to 30 points and eventually crossed over the mark.

Actually, he said nothing was going through his head as the shots kept falling and the eyeballs started to get wider and wider in Hilton.

“In that mood, I don’t feel anything. I don’t feel tired,” Brockington. [It’s] just, we’re winning this game.'”

Brockington set a career-high with his 35 points but felt like his offensive firepower wasn’t what gave the Cyclones the win and put the Mountaineers away.

“I feel like I kept us in it, but Gabe’s shots were huge,” Brockington said. “They were daggers.”

Kalscheur scored eight points, including two three-point shots, in the final 2:22 of the game. To ice the win for Iowa State, Kalscheur took to the free-throw line with eight seconds left. Iowa State leads 82-81.

Before the buzzer sounded and the Cyclones improved to 19-9 overall and 6-9 in Big 12 play, Brockington had to let the crowd know how he was feeling. Shocker: he felt hot.

He even added a Michael Jordan shrug for good measure.

“They keep putting whoever they got on me and that just keeps happening,” Brockington said of his shrug. “I don’t know what was going through [their] head.”

Otzelberger has seen some of Iowa State’s greats up close. But could he have envisioned a performance like Wednesday from Brockington when he first recruited him?

“This is pretty amazing,” Otzelberger said of Brockington. “His confidence continues to grow. Certainly, we didn’t expect this, but when you see what he does every single day, 10 times out of 10 you’ll take those guys and go to war with them, and you know they’re going to keep getting better.”