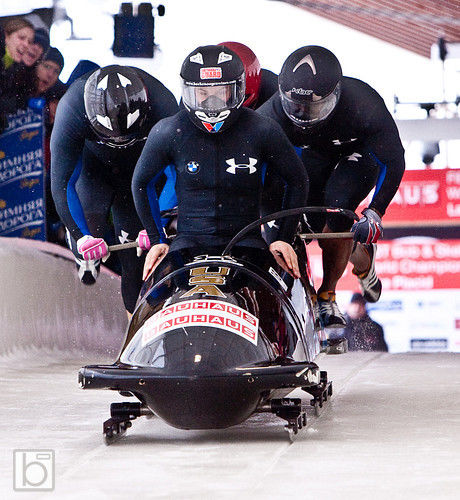 Jesse Beckom III felt his phone ring in his pocket.

The former Iowa State linebacker stopped helping his friend move into a new apartment and picked it up.

On the other end was his defensive coach at the time, Charlie Partridge.

“Hey, what are you doing?” Partridge said.

“What do you think about bobsledding?” Partridge said.

“I don’t know. What do you think about it?” Beckom III said.

It’s the middle of the summer and the last thing Beckom III was thinking about was winter, let alone bobsledding.

“I met a guy named Travis that wants you to come out to a bobsled workout,” Partridge said.

“Coach seriously, what do you want?” Beckom III said. “What are you joking about?”

“No, I’m being serious,” Partridge said.

“Give the guy my number,” Beckom III said.

That small conversation developed a true passion that would be part of his life for about 10 years and change his mindset to gold medals instead of touchdowns.

“I think God set it up where two paths crossed a path where it had never crossed before,” Beckom III said.

Before this phone call, Beckom III was focused on football and achieving his dreams and goals as a Division I athlete. He started his college career in 1995 at Trinity Evangelical Divinity School in Deerfield, Illinois.

After two years, Beckom III decided to transfer to Iowa State because it was a Division I program, and it had an architecture field for his major. He walked onto the football team, but after becoming a starter and eventually the Big 12 Defensive Newcomer of the Year in 1998, he received a full scholarship with the Cyclones.

“God had a good plan for me,” Beckom III said.

After his final season as team captain in 1999, Beckom III received a Bachelor’s degree in community and regional planning. He would later earn his Master’s degree at Iowa State in 2003 after a few years of graduate school.

Beckom III said he cherished his time at Iowa State and had plenty of memories both on and off the field. His favorite on field moment was during the winter time one season with his defensive line coach Mike Nelson.

Nelson would wear shorts and t-shirts during practice in the middle of winter outside. Beckom III thought he was crazy for wearing that type of attire, but it proved a point to many of the players.

“All the coaches were just shaking their heads, but that was coach Nelli. He was a character,” Beckom III said. “I think he was trying to tell us that it’s not too cold to be playing football.”

His time at Iowa State led to that phone call, which not only changed his mindset, but changed the sport he would focus on.

Beckom III went over to Lake Placid, New York, to start his journey with bobsled at the camp Travis Bell mentioned in the phone conversation.

The majority of athletes that compete in bobsled were once either a football player or a track athlete. Football contains similar approaches to pushing a bobsled, while track stars have the ability to gain speed quickly, which is needed on the ice.

Even though Beckom III had the strength and determination to learn and understand the sport of bobsled, he realized there were some differences between football and bobsled.

“One of the biggest differences is that bobsled focuses on your lower body to push,” Beckom III said. “In football, you focus on many different parts of your body. I just needed to realize it was going to be a learning process.”

Beckom III soaked in every minute of learning at this camp and fell in love with the sport. He realized this could potentially be something he continued to do for a number of years.

The former Cyclone football linebacker started his bobsled career in 2002 but developed a close friend in 2004 with the addition of Curt Tomasevicz. The two would find out soon that they would spend the majority of their time together.

Whether it was lifting or practices or outside drills, the two were joined at the hip, but never rode together in a bobsled throughout their careers with Team USA.

“He was the first person I ever met when I started my career with bobsled because he picked me up from the airport in Colorado Springs, [Colorado],” Tomasevicz said.

Little did Tomasevicz and Beckom III know that each of them would encourage and push each other to reach their individual goals for the next eight, nine, 10 years.

The memories of bobsled

Beckom III was determined to make an Olympic roster to represent the United States in the biggest games in the world.

During that time to reach that goal, he stayed focused. He also had the help of his strength coach and one of his good friends, Jon Carlock.

Carlock was a strength and conditioning coach for Team USA, specifically the winter sports. He worked a lot with Beckom III and Tomasevicz, especially when they were two of three bobsledders in Colorado Springs for training starting in 2007.

Carlock made an individual workout and dietary plan to make sure the two were fit and ready each day to get a step closer to that Olympic goal.

“The first thing that jumped out to me was that Jesse is a big, powerful athlete,” Carlock said. “If these are what all the guys look like, this could be a lot of fun.”

There’s not many times that Tomasevicz didn’t see Beckom III in the weight room because it was his place of relaxation and his getaway from the world.

Training isn’t always serious and focused because Carlock and Tomasevicz remember some funny moments in Colorado Springs, too. One specifically that was brought up by both of them was an incident involving a bear.

While the three of them were working out on the track one day, a bear came into sight. According to Tomasevicz, the black bear was probably around 200 pounds and was about 200 meters away from the track.

Carlock added that while Beckom III was running away from the bear, he proceeded to pick up everyone’s bags, so there was nothing left behind.

Beckom III was just that kind of person in Carlock’s eyes. He always thought of others before thinking of himself.

The other memory Tomasevicz could think of was centered around a team activity. When they first got to Colorado Springs, a group of people thought it would be fun to play water polo to create a good team atmosphere.

Tomasevicz explained it best on why this wasn’t a fun activity for Beckom III.

“Muscle mass definitely sinks and Jesse, in that sense, is about as dense as they come,” Tomasevicz said jokingly. “I don’t think he veered more than about five feet from the edge of the pool. I know he wanted to because he’s a competitive guy, but he knew he didn’t belong in the middle of the pool.”

One of Beckom III’s favorite memories came internationally when his team was out in Austria. In December, the Austrian children have a tradition of taking brooms and hitting people on the streets.

They decided to run around their hotel area and try to outrace the children. Beckom III said it was a great time and the children loved the opportunity to run around. They never caught the bobsledders, but it was fun for Beckom III to be a part of their culture for the evening.

“Just those little moments overseas in general,” Beckom III said. “Traveling around the world was mind blowing and a lot of fun.”

Those memories are what the three remember in today’s world when they talk over the phone. Those are the memories of why Beckom III stayed in the sport of bobsled for a longer period of time.

He also stayed because he wanted to achieve his dream.

“I’m an Olympic-caliber athlete,” Beckom III said. “God had other plans for me, so I didn’t make it.”

An injury hurt Beckom III’s chances at making the 2010 Olympic team after he had surgery on both of his lower legs in 2009. The recovery to get back to full strength took some time, but he was able to lean on his family who supported him throughout his entire journey with bobsled.

Family is a big part of his life and he makes sure to thank them for all the support he received throughout his career.

Even though he didn’t make an Olympic team, he did make an impact at the National and World Championship levels.

“It meant the world to me, it gave me a chance to represent my family, the gifts God gave me, represent my country and show the world what a Cyclone could do, because I guarantee you that everyone knew I went to Iowa State University,” Beckom III said on participating in the World Championships. “It was amazing and humbling. For me, there was no greater feeling than sitting there in my team gear, USA on my back and the flag on my arm, with my teammates and seeing other bobsled athletes walk in with their country’s gear on.

Tomasevicz and Carlock had nothing but positive statements on Beckom III’s journey through bobsled. They both were happy to have met someone like him to spend nine or 10 years with along their journey as well.

It may have taken Beckom III a little under four minutes to take a bobsled down the ice, but his personal trip down the ice will last a lifetime.