Students come together for Arabic Night 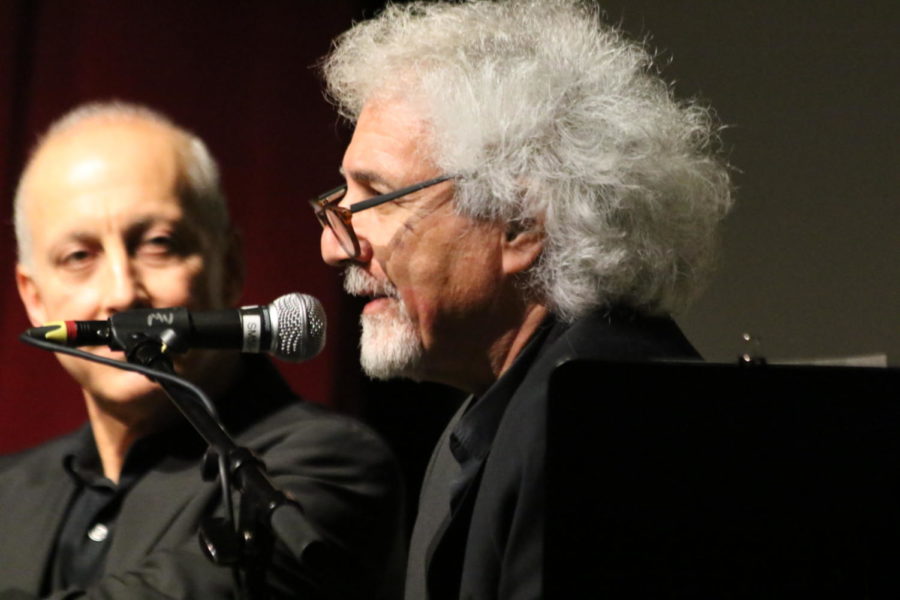 Michel Moushabeck of the Layaali Arabic Music Ensemble addresses the audience in the Great Hall prior to performing on Saturday night.

This year’s second annual Arabic Night set out, and achieved its goal of bringing the many diverse aspects from many different cultures and countries to as many people as possible.

With, according to the Vice President of the Arab Student Association Matthew Heinrichs, about 500 people in attendance. For many of Iowa State’s students, Feb. 3 was a night marked by either a slice of home and familiarity or a night of learning, unity, supporting and being exposed to a new culture.

Many students came to experience new aspects of Arabic culture and also to support their Arabic friends who were attending or involved in the event, including Elijiana Younger-Hoffman, freshman in open option, who came in support of her friend, Khadija Ahmed, freshman in pre-business, who walked in the night’s fashion show.

For many students, Arabic Night was also a night of learning and exposure.

“I’m from India, I want to know about other cultures … I love travelling … and I want to explore more cultures,” said Vatsal Bhatt, sophomore in computer engineering.

For Bhatt, attending Arabic Night was a matter of exploring and learning about a culture that wasn’t his own. Bhatt’s favorite parts of the night were the live Arabic music and the Arabic food served.

Rithana Mompremier, junior in aerospace engineering, attended the event with a large group of her friends and having enjoyed last year’s event, returned this year to support the event again. As a Haitian, Mompremier enjoyed the opportunity to experience a culture she wouldn’t have otherwise had a chance to easily experience or interact with.

Mompremier went on to speak about the diversity of the music played throughout the night by the Layaali Arabic Music Ensemble, an Arabic music trio from Massachusetts who plays both classic and contemporary music from around the Middle East.

“I love hearing the music from different places because to me it sounds a little bit similar, but there’s little distinct differences in each of them. So there’s a connection of the different countries, but they’re all different in their own way,” Mompremier said.

“I feel like there’s so much we don’t know about Arabic culture, and I’m from an Indian background. I never was exposed to it, so coming here I learned a lot about the culture. I think it’s a really good learning experience.” said Sophomore computer engineering major Smruthi Sandhanam on why she feels that learning about the vast amount of Arabic cultures is important to her.

Sandhanam then went on to speak about the importance of exposure and education about Arabic culture in general.

“I think education is the most important thing, I feel like a lot of people assume things when they’re not [educated]. I think it’s easier to learn things when you’re talking to people from the culture. You get to know a lot more,” Sandhanam explained. “ I think it’s important that we are exposed to Arabic culture and I’m glad that we’re getting exposed to Arabic culture at Iowa State.”

Senior Animal Science major Sarah May, who said she has attended many of the other culture nights on Iowa State’s campus, felt that it was important to expose yourself to as many cultures as possible.

“It’s incredible to learn about the different people and cultures of the world and not get close minded to things we’re familiar with, but stepping out and seeing the rest of the world is really incredible” said May, elaborating on her takeaways from the many culture nights she’s attended.

May went on to say she appreciated being able to experience the wide range of different cultures and traditions of the many different countries that make up the middle east that were showcased in the food, the art, and the clothing showcased at Arabic Night.

Ben Reichert Senior, Bioinformatics and Computational Biology major, and a student in one of Iowa State’s Arabic language courses said the night gave him an opportunity to experience the many diverse aspects of Arabic culture outside of a classroom setting.

“I’ve taken the Arabic culture class in the past, but it’s just really cool to see firsthand rather than academically. Seeing it firsthand is just a lot better I think” said Reichert.

Senior Electrical Engineering major Omar Elsherbiny said that he sees the event as important in multiple ways. He spoke about how it was important that Arabic Night was able to give so many Arabic students from all over different parts of the Middle east a chance to not just remember or talk about, but experience and live their culture, even if it was just for a night, while they were in Ames.

“Exposing [non Arabic students] more to the culture, to make people a lot more informed and less culturally inept about the world around them” said Elsherbiny when speaking about what he hoped Arabic Night could provide for non Arabic students in attendance.

“If we educate everyday people about cultures from all around the globe, not just the Arabian culture then we’re on route to making the world a better place” Esherbiny continued.

Saif Jamal, a Sophomore in industrial engineering also felt that educating people about the diversity of Arabic cultures was an important purpose that Arabic Night achieved.

Arabic Night celebrated and represented many of the diverse aspects of Arabic culture and achieved its intended goal to educate those in attendance, while also giving many international and Arabic students an opportunity to feel at home.