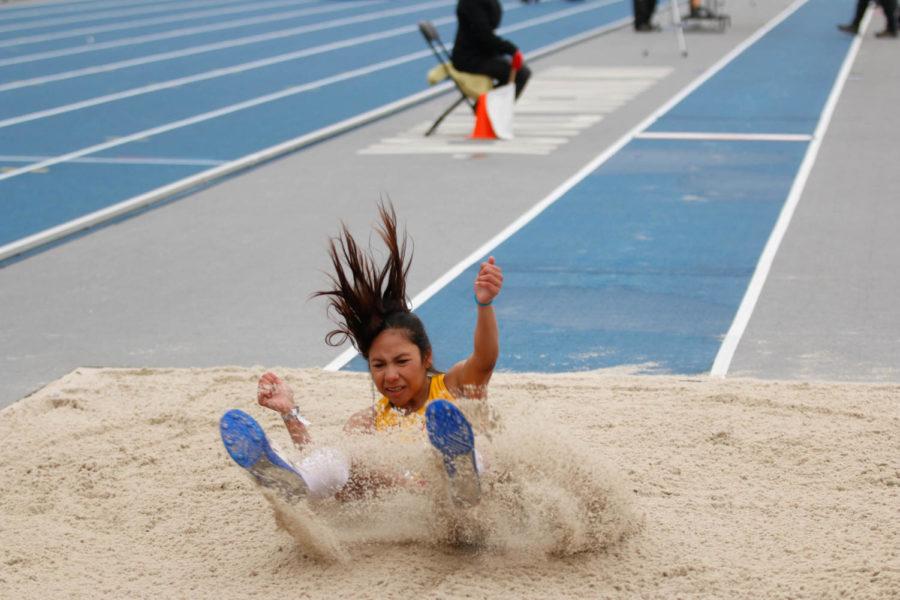 Iowa State junior Jhoanmy Luque lands during the triple jump at the Drake Relays on April 29. Luque's jump of 43-0 1/2 landed her in second place behind Tori Franklin, who competed unattached.

The No. 21 Iowa State women’s track and field team is headed on over to Nebraska for the Husker Invitational this weekend.The team will be up against some tough Big Ten talent this weekend.

The runners get a break from action this weekend, however, the throwers and jumpers are in full effect. The Clones will take part in the 60m hurdles, long jump, triple jump, shot put, weight throw and Pentathlon. With the indoor championships three weeks away, this meet is key for the team as individuals to make it in each of their competitions.

The team is mixed with experience and youth with the leader Jhoanmy Luque leading the way for the jumpers. The Venezuelan is on a vengeance to get back to her form from last year.

“This was a very short meet because we leave Thursday, so preparation is key to getting ready for a meet,” Luque said. “I do not get nervous before meets anymore, I have been doing this for my whole life. A meet is just a meet and I know with the hard work I put in each practice it will put me in the right mindset to compete.”

Luque will have some friendly competition with one of her teammates this weekend in the long jump and triple jump in freshman Jalaiya Bartley. Luque and Bartley practice together throughout the week and Luque has been a mentor for Bartley. This will be the first tournament that the two are competing together. Luque is working to teach Bartley tricks and tips to become a better overall jumper.

“Jalaiya is an amazing athlete and I am excited for what she can accomplish in her Cyclone career,” Luque said. “She will learn how to adapt to college track sooner rather than later. It took me four years and you just have to trust the process.”

Head coach Fletcher Brooks has been getting the group ready for the Husker Invitational by pushing his athletes to go above and beyond for the meet. One athlete that has been getting her name out there is freshman Essence Henderson. Henderson has been making noise throughout the shot put and weight throw world. She finished second in the shot put at the Black & Gold Premier with a score of 50-3 ½.

“Coach Brooks has helped me so much in my technique this year,” Henderson said. “He pushes all of us to give our all each meet. Kiara [Williams] is my road dog, she is always by my side.

“We compete well together and we always work to better each other in every practice. We have to keep pushing to get to the indoor championships.”

The team will start competing Friday at noon, with field events starting at 4:30 p.m. The team will use this last meet to help them build for the meet this weekend. Since the dust is fully off, it is time to compete.