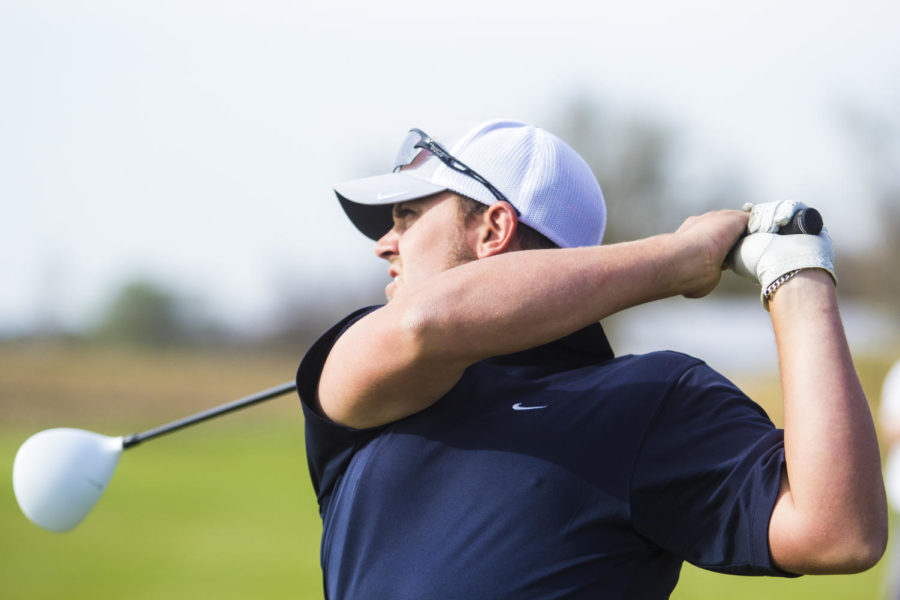 Senior golfer Sam Daley works on his swing at practice on April 14.

The Prestige at PGA West is up and running after having to cancel Monday because winds were too high. With only playing two rounds of golf, this could make the final score much closer.

After the first round of 18 holes played, the Iowa State men’s golf team is sitting in 10th position. There are 16 teams in this tournament, and after day one, only a 27-stroke margin separates Stirling in 16th from the leaders, Oregon and Oklahoma State.

The Prestige features many ranked teams such as Oklahoma State, Stanford, LSU, Pepperdine and five others. Although many ranked programs are in the tournament, the non-ranked teams are right in the mix of things as well.

The Cyclones are a few swings ahead on Stanford (B) ranked 17th and San Diego State ranked 44th, according to Golfstat. Iowa State is just one stroke behind 18th-ranked USC.

The Cyclones have great representation on the individual leaderboard as well. Redshirt senior Denzel Ieremia is currently tied in the fourth spot along with four others with two shots under par. Ieremia is among many individually ranked players at the end of the first round.

Iowa State sophomore Tripp Kinney and freshman Lachlan Barker are tied with many others in the 34th position at three over par.

The final day of The Prestige begins Wednesday morning at 7:30. Danny Daniels will start the Cyclones off with his tee time at 8:14 a.m. on hole 10.