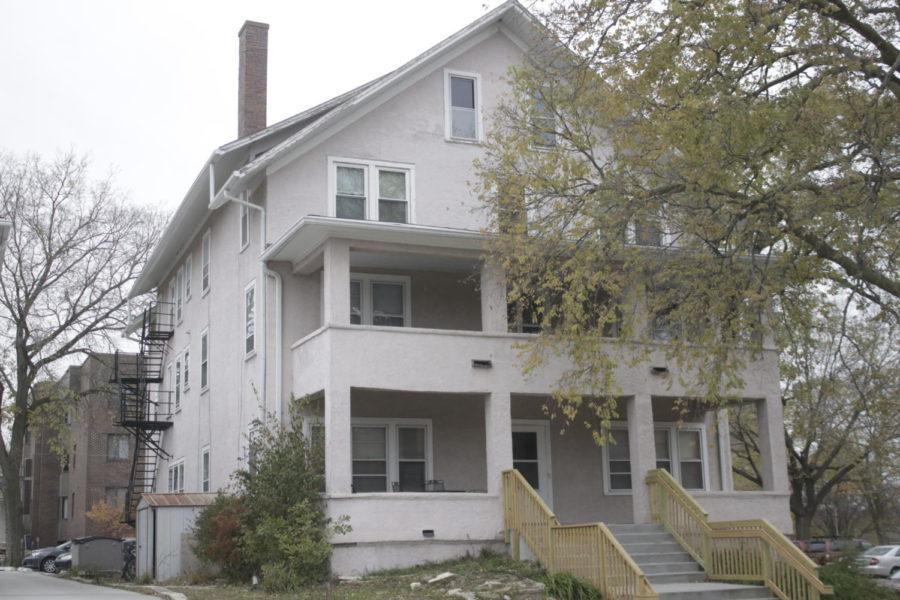 233 Sheldon Ave is a 26-unit house where occupants rent by the room.

When Austin Downey attended an Ames City Council meeting in late September, he was surprised he would be granted the opportunity to speak, let alone have his voice heard.

Downey, a graduate engineering student studying wind and energy at Iowa State, bought his house nearly a decade ago. As he nears graduation, however, his time in Ames is decreasing and the fear of his home falling into foreclosure is increasing.

“I moved here when I was nineteen and bought a house with money I had saved up from my paper route,” he said. “I have no debt, I worked incredibly hard to purchase a house that was on Lincoln Way.”

In October, the Ames City Council passed a moratorium prohibiting the city from issuing rental letters of compliance until April. For Downey, this impedes his ability to sell.

“I fully understood that [my] house would always be a rental; no one is going to buy it for their new family with two kids and a dog,” he said. “But also, there are people who live on my street in rentals who are families and they are low income … with kids.”

Downey, and many others, presented their arguments to the council both for and against the moratorium. What it boiled down to for Downey, however, was that the city made the wrong choice.

“When you make a decision, you have to make some people mad and I affirmatively believe the city is making the wrong decision,” he said.

The moratorium, however, is just one piece to the larger puzzle the city has been trying to solve in addressing issues of rental occupancy. It became divisive.

During a six-month period, the Ames City Council spent hours on Tuesday nights trying to work with city staff, long-term residents, property managers, landlords and students to understand the complexity of rental housing in Ames.

At one point, the term “student ghetto” was used to compare neighborhoods around campus that were largely rental-occupied.

A state law passed by the Iowa Legislature in the previous session that prohibited cities from limiting rental occupancy based on familial status is where these issues began.

Which, it turned out, was exactly what Ames was doing. So, the council got to work.

By the end of the year, however, working under a looming deadline of Jan. 1, 2018, when the current ordinance would go out of effect, the City Council still hadn’t approved all three passages of the ordinance it had crafted.

So on Jan. 9, 2018, the City Council passed what council members had completed under the promise from the freshly appointed Mayor John Haila that there would be amendments to the ordinance — No. 4332 — down the road.

The ordinance’s provisions are as follows:

In some instances, the new ordinance worked to benefit stakeholders. In some houses, a landlord could have the opportunity to rent out his or her property to as many as five individuals.

For homeowners and long-term residents, they knew many of the houses didn’t have more than three bedrooms, therefore limiting properties in their neighborhoods to just three occupants.

For students, however, the provision relating occupancy to parking was something they actively encouraged the council to stop pursuing.

“Right now, I am not affected [by the ordinance]. Being an international student is something I identify with, and most of my friends don’t have cars, so it was on their behalf that I was talking,” she said.

To counter the students’ concerns, the council amended the parking provision to expire at the end of the moratorium — April 30, 2018 — to give them more time to decide on the next best steps.

Concerns by the council

However, leases signed during this season are tied to that provision which could limit some landlords regarding how many people they can rent to.

Issues like this were a major concern that Council member Amber Corrieri, who was the only council member to oppose all three readings of the ordinance.

And going into the third reading of the ordinance on Jan. 9, Corrieri still had mixed feelings. She said her opposition to the ordinance was due to a fear of its complexity and what that could mean for the community.

“The confusion in general, not just among landlords but tenants, was a big factor [in my opposition,]” Corrieri said.

Corrieri recalled the emails she got leading up to the ordinance’s adoption from confused landlords who worried how the ordinance would affect them.

Another reason for her opposition had to do with concerns on how it could affect those in nontraditional living arrangements. For example, a couple living with one spouse’s older parents in a three-bedroom house would technically be in violation of the ordinance, as the number of adults exceeds the number of bedrooms.

Council member David Martin shared a similar concern. He worried that a high school student living with their parents in a two-bedroom house could turn 18, which would make their living situation in violation of the ordinance.

“That really rubbed me the wrong way, that [an incident like] that could cause an over-occupancy situation while you’re still a high school student,” Martin said.

Martin considered proposing an amendment to address this issue during that Jan. 9 meeting — his first as a council member — but learned a provision in the Iowa State Constitution forced city government to honor existing contracts, including leases.

Martin interpreted this as giving them a grace period on the issue and hopes to address incidents such as this further in the planned workshop on Feb. 20.

“I looked at it and thought we don’t need to do this immediately. We do need to do it this year,” Martin said.

However, some council members, such as Gloria Betcher, opposed putting off the passage of the ordinance.

“I don’t like living in a world where we don’t have an ordinance. Places and things could get worse before it gets better,” Betcher said during the last reading in January.

Martin agreed with Betcher’s sentiments. He saw it was unclear how much of the old ordinance was enforceable and how much wasn’t.

“It was extremely important to revise our code so we are no longer in conflict with state law,” Martin said.

Corrieri, on the other hand, felt the statement was hyperbolic. She felt the majority of leases were already signed by that time. However, she felt later on this definitely could have become an issue.

“I really couldn’t envision a scenario where we were all of a sudden going to see landlords cramming people into rental properties that only had three people before, because frankly, I don’t see where those people were going to come from,” Corrieri said.

As the council looks forward and amends the current ordinance, Corrieri would like to see the limit on adults tied to number of bedrooms limited to more “vulnerable” areas of the city, like the south campus area. Currently the ordinance affects all rental properties citywide.

Another thing Corrieri hopes the other members of the council will look at is rental overlays. While not addressed in the ordinance, rental overlays mean taking an area or neighborhood and saying only a certain percentage of properties can be rentals.

While something like this could be an effective way to keep too many students from living in the south campus area, Corrieri fears this would just cause problems in other parts of the city.

“We really need to think long and hard about what the impacts are,” Corrieri said. “Do you want your students living close to campus? I think so.”

Another directly related issue in the city is parking, which the ordinance attempts to address.

Martin, however, worries the ordinance treats everyone as if they have a car.

“I’m not sure that’s the best way to really control who’s living in a building by number of cars,” Martin said.

Martin feels students living near campus do not necessarily need a car, and the ordinance disadvantages those with cars through parking requirements.

“Believing simply because you’re a human being, you’ll have a car doesn’t seem quite true,” Martin said.

So while much is left unclear to even City Council members in the recently passed ordinance, it still is the legal code in Ames. To address this, the city will be hosting a workshop on Tuesday, Feb. 20 to present the issues at hand and discuss the ordinance with community members.

Corrieri hopes this will guide the council when deciding how to deal with the unintended consequences of the ordinance.

“We might hear other things at the workshop we hadn’t considered yet,” Martin said.

As for Haila, he feels thus far the city and the council have dealt with the rental occupancy ordinance issue in a positive way.

Haila sees parking as a major issue that needs to be addressed as it serves as challenge because of the circulating student population and the fact that on any given day, the number of cars in use in student-heavy neighborhoods may vary.

In his opinion, the ordinance needs to deal with parking in a way that is sustainable.

“How do we come up with an ordinance that can be applicable five or ten years down the road without causing other issues?” Haila said.

Above all however, Haila sees himself as a mediator on the issue in his role as mayor. He stressed the importance of members of the community from all backgrounds attending the workshop.

“So far it seems like, I’m not sure everybody is listening to everybody else,” Haila said.

With a wide variety of stakeholders who have different images for what rental occupancy should look like, such as students and developers to neighborhood associations and landlords, Haila hopes these groups can come together to find a point of understanding and compromise at the workshop.

The workshop is scheduled for 6 p.m. on Tuesday, Feb. 20 in the Ames City Council chambers, 515 Clark Avenue. The first hour of the workshop will include staff presentations to the council and the second hour will be dedicated to public input.

Reporting and editing contributed by The Daily’s Alex Connor.