A night of culture, connections and community at Arabic Night 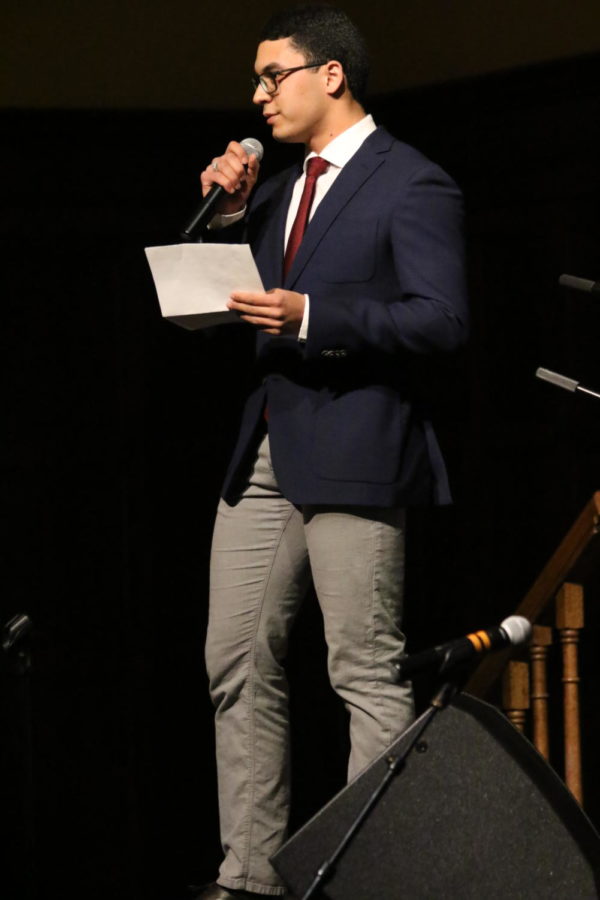 The second annual Arabic Night was a night marked with a celebration of the diverse food, language, art and culture of the Arabic people.

According to Matthew Heinrichs, vice president of the Arab Students Association, the event attracted about 500 attendees, meeting the board members’ expectation for the people count for this year’s event. This event showcased the actual culture of Arabic people and the everyday life they have.

The night began with attendees having the opportunity to attend 15 booths, representing multiple different clubs and countries within Arabic and Middle Eastern art and culture. The booths included Henna tattoo, calligraphy, spices and a photo booth, among others. Many countries were represented including Yemen, Kuwait, Palestine, Sudan and Egypt.

After visiting the booths there was a variety of Arabic foods to choose from that represented many different Arabic countries’ cuisines. Dishes offered included shirazi salad, a popular Iranian dish featuring cucumbers, onions and tomatoes; a spiced lamb meatball called kofta; and for dessert, baklava, a type of pastry made with chopped nuts and a simple syrup. All dishes offered, aside from the kofta, were vegetarian and vegan.

After enjoying their meal and mingling, those in attendance sat down for the first performance of the night. The Arab Students Association introduced the art of Dabke dancing, a form of folk dance that literally translates to “stamping of the feet.”

After a short break the Layaali Arabic Music Ensemble, a classical Arab music group from Massachusetts took the stage and spoke about the importance and diversity of Arabic art and culture.

“Music, … art and literature really sparks joy and beauty,” Director of the Layalli Arabic Music Ensemble Michel Moushabeck said. “At the same time, it can inspire joy, a lot of compassion and understanding and connection with other people.”

Moushabeck went on to speak about the group’s goals for their music and the importance of spreading their art and culture to a wider audience.

“Our mission statement is to introduce Arabic music to as wide of an audience as possible through concerts and workshops and recordings and lectures and we travel all over really giving such performances and lectures so that we can bridge differences and spread the beauty of our culture and music,” Moushabeck said.

After another short intermission there was a student poetry reading from famous Arabic poet Ibn al-Khaiyat, a love poem, read in Arabic and translated in English on a projector for non Arabic speaking audience members to read.

Next to take the stage was a large group of students modeling various different forms of clothing and dress that represent many different and diverse Middle Eastern cultures. Not only was the clothing showcased culturally diverse, but it was also diverse in use and application ranging from extremely formal and celebratory clothing to traditional clothing and everyday dress.

Another recess was then taken, allowing for anyone who may have come late, or not had a chance to explore the booths earlier in the night to have another chance to get a henna tattoo or have their name written in Arabic on a bookmark.

At the completion of this recess Layaali Arabic Music Ensemble again took the stage and performed a second set of songs, both contemporary and classical, that showcased Arabic music from a variety of different cultures and nations.

To close out the night, a tutorial of the Dabke dance was given and all of the attendees were encouraged to join in a “dance party” to celebrate the evening’s events.