Iowa State relies on a team effort to upset No. 8 Texas Tech 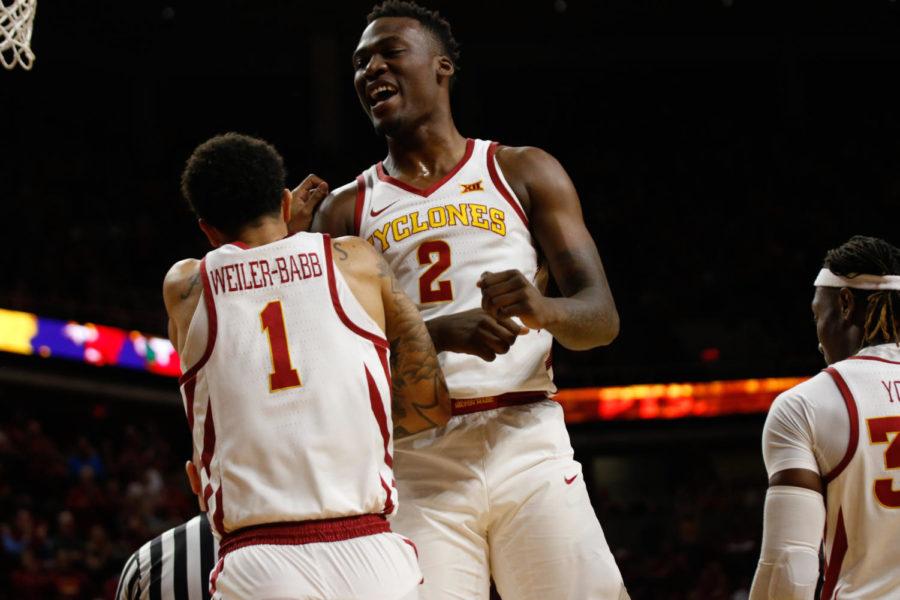 Nick Weiler-Babb inbounded the ball with four seconds left on the shot clock. The ball came back to the redshirt junior guard and he ran up the court and heaved up a prayer from the 3-point line.

It swished through the net and Iowa State led Texas Tech by 17 points with 7:31 left in the second half.

It was just Iowa State’s night.

“I was just praying it went in,” Weiler-Babb said jokingly. “We practice that shot. Special situations, we work on stuff like that.”

Those shots kept falling for Iowa State throughout the entire game resulting in a 70-52 win for the Cyclones over No. 8 Texas Tech. The 18-point win was the largest win margin over a top 10 opponent in school history.

Coach Steve Prohm wanted more energy and focus after a “frustrating” loss to TCU on Wednesday night. Well, he definitely received both wants early and often against the Red Raiders.

The Cyclones started with a 14-4 run with the help of early production from redshirt freshman forward Cameron Lard and Weiler-Babb. Lard scored 10 of the first 19 points of the game and finished the first half with 14 points. He ended the night with 18 points and six rebounds.

“[Cameron Lard] is our emotion,” Weiler-Babb said. “He’s one of the guys that we couldn’t win without him. He’s out here tipping basketball balls out after a missed shot, getting those 50/50 balls under the basket, blocking shots and he’s finishing around the rim.”

Along with Lard, Iowa State had production from its three main guards in Lindell Wigginton, Donovan Jackson and Weiler-Babb. Each of them scored 13 points and went a combined 12-for-34 from the field and 7-for-18 from the 3-point line.

Weiler-Babb also had seven rebounds, five assists, two blocks and three steals to finish his game. He also only gave up three turnovers.

Those four players are known for their leadership and presence on the court, but there was one Iowa State player that broke out of his shell this game. That player was Zoran Talley Jr.

He was the first player to be called off the bench and he took advantage of the opportunity in front of him. Talley Jr. went 5-for-8 from the field and scored 11 points with six rebounds. He also connected on his first 3-pointer of the season.

This game was something he needed after the adversity he’s faced throughout the beginning of this season.

“Body is still getting back into the groove of things,” Talley Jr. said. “It’s all about staying in the game and telling myself that I’ve been doing this my whole life.”

Talley Jr. played in six non-conference games to start the season before he faced a stress fracture in his foot. He sat out with a boot on his foot until the Oklahoma State game on Jan. 6.

During that time, he had a lot of help from individuals in the athletic department to keep his head up. One of those individuals helping him was Iowa State athletic director Jamie Pollard.

After the Baylor game last Saturday, Talley Jr. didn’t play a single minute and he passed Pollard heading into the locker room. Pollard told him that his time was going to come. That’s all the confidence he needed as he prepared this week for this Texas Tech game today.

“Me and [Jamie Pollard] got a good relationship,” Talley Jr. said. “When he told me, I believed in him. I just got to stick to my dreams that I have.”

Prohm along with Weiler-Babb and Lard all agreed that this win was big for Iowa State, especially with the second half of the Big 12 season coming around the corner. An 18-point win against a top 10 team allows the Cyclones to know they’re capable of beating any team out there.