Andrea Gibson to combine music and poetry at the M-Shop 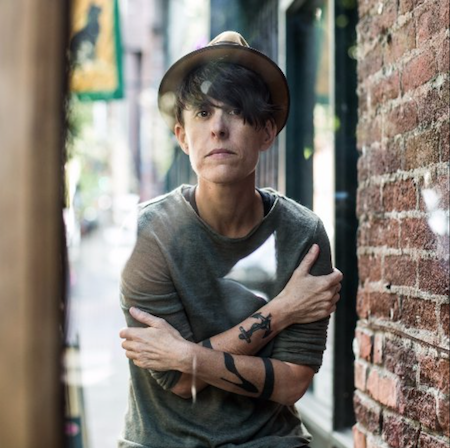 Spoken-word artist Andrea Gibson will bring poetry and music to the Maintenance Shop Thursday evening. The show will include original works from Gibson that highlight life and society.

Andrea Gibson boasts three collections of poetry and seven full-length albums, and is currently working on an illustrated collection of memorable quotes.

Gibson also goes by the name Andrew, and uses gender-neutral pronouns. Much of their poetry deals with social issues including LGBTQ+ topics such as gender. Poems including “Swing Set” and “Andrew” directly address it.

Gibson’s poetry collaborates with the work of musicians to fully capture the emotion of the very real subjects that are presented. These subjects include not only LGBTQ+ issues like gender, but also other issues that press upon our society.

Gibson’s most recent release, “Hey Galaxy,” was built while they were pursuing another project. Working on an album about love, Gibson was surrounded by the 2016 presidential campaign and election and decided to take a new direction. They went with an approach that focused more on social justice.

“I wanted to make something political and human and gusty in its revolt,” Gibson said in a quote on their Spotify page. “Something beautiful in its sweetness and rage and vulnerability. Something loud and tender at the same time.”

Born in Calais, Maine, Gibson eventually made their way to Boulder, Colorado. It was there, with their girlfriend, they attended a show and found a desire to become a spoken-word artist. Boulder was also the city where Gibson performed their first show.

Since the beginning of their career, Gibson has performed at a variety of events such as anti-war and peace rallies and pride events. In such organizations, Gibson participates in activism for causes that correspond with the content of their art.

Over the course of that career, Gibson has been granted a number of awards. They won the first ever Woman of the World Poetry Slam in 2008. They also finished fourth at the 2004 National Poetry Slam, and third at the 2006 and 2007 Individual World Poetry Slams, as well as claiming the Denver Grand Slam Champion title four times.

Gibson is in the midst of a tour that will pass through much of the country and a few venues abroad.

The M-Shop will be equipped with 150 seats for the event.

Spoken word is not an art form that comes to the venue in this capacity often. It is not uncommon during open-mic nights, and the venue does play host to comedy on a fairly regular basis. This show will offer something unique that is outside what Chamberlain usually sees and works with.

“We usually focus on music,” Chamberlain said. “I think it will be really interesting.”

This M-Shop event can lend itself to someone interested in poetry, language or even music. The show is free and begins at 8 p.m. Doors will open at 7:30 p.m.