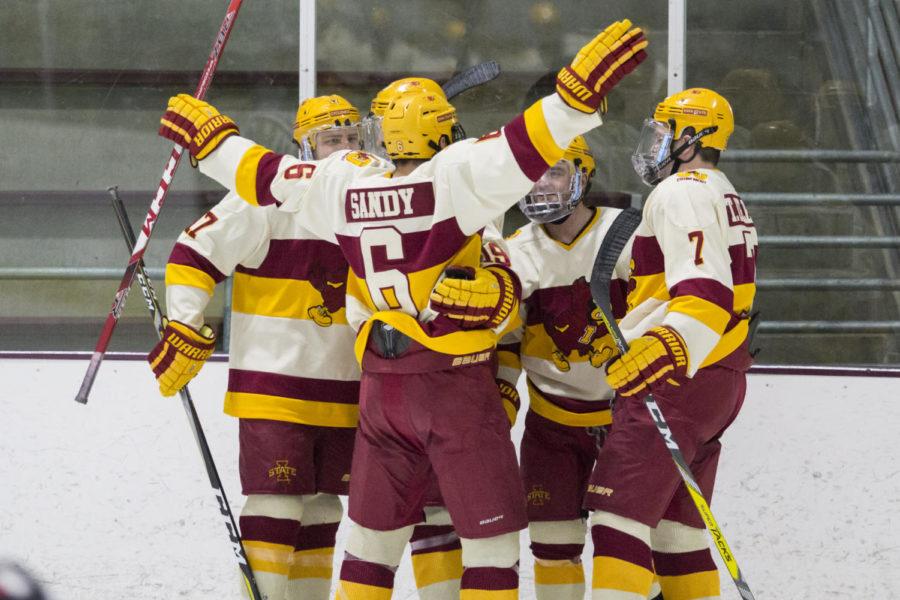 Members of the Cyclone Hockey team celebrate after their first and only goal by senior Kody Reuter Dec. 3 at the Ames Ice Arena during their game against Minot State

The monkey is off their back and the good vibes are flowing.

“We’re all excited right now, it’s a huge bounce-back,” said junior forward Trevor Sabo. “We’re all proud of each other. We came out with a great effort tonight.”

After suffering through a six-game losing streak that lasted nearly two months, Cyclone Hockey found itself back in the win column tonight with a 5-4 road victory in overtime against the Central Oklahoma Bronchos.

At the center of that bounce-back was Sabo, who gave a performance that he said was exactly how one envisions in their mind when coming back from an injury.

The junior forward was one of several Cyclones that missed time during the fall semester stretch, but he returned with vengeance tonight and managed to not only earn a hat trick, but the game-winning goal in OT as the cherry on top.

For how excited the team was with the victory, you’d have been hard-pressed to find someone any more exuberant than Sabo.

“It’s so hard to put into words, but just finally putting that one home at the end of it is a great feeling,” Sabo said.

However, that excitement could very well have been replaced with disappointment and frustration had it not been for the efforts of another Cyclone who returned from an extended absence.

Junior defenseman Kurt Halbach, playing in his first game all season, made two plays during the game that had a direct impact on its final outcome. One was receiving the assist on Sabo’s overtime game-winning goal, while the other happened much earlier.

Just before the midway point of the second period with the Cyclones down 2-1, senior goalie Derek Moser left his net to make a play on a puck that had come outside of the net’s crease.

Trying to pass the puck off, Moser turned it over and gave Central Oklahoma a scoring chance that, had the puck went in, easily could have prevented the game from even reaching overtime.  Halbach, however, sprawled out on the ice to block the puck from going into an unguarded net.

While this is certainly something that players are taught to do, the play nonetheless encapsulated the effort, unselfishness and awareness that the struggling and injury-plagued Cyclones desperately needed in order to right the ship.

To get that play and overall performance from someone who hadn’t played a game in almost ten months, though, was quite unexpected.

“We’ve been pretty thin with all the injuries on defense, so for Kurt [Halbach] to play as well as he did tonight was a pleasant surprise,” said head coach and general manager Jason Fairman.

Following the block, as well as a subsequent timeout from Fairman to regroup the team, the Cyclones went on to score two unanswered goals courtesy of sophomore forward Tommy Hanson and the aforementioned Sabo to put themselves ahead 3-2 with 55 seconds left in the second.

However, the lead wouldn’t last long as the Bronchos Alex Durbeniuk put away a shot from the blue line with nine seconds remaining in the frame to tie things up at three heading into the final intermission.

After each team once again scored within a minute of each other late in the third period to even the score at four, another momentum-shifting moment occurred.

It didn’t come as a result of any shot or hit, but rather a Central Oklahoma attempt to clear the puck out of their own zone. A Bronchos player lifted the puck and hit one of the glass boards at Arctic Ice Arena just right, causing the glass to shatter and the game to delay about 15 minutes.

While it would have been understandable for the Cyclones to see the incident as an intensity and focus killing negative, Fairman actually viewed it as an event that worked out in his team’s favor.

According to him, the Bronchos had won the previous few shifts and were starting to turn a deadlocked affair in their direction prior to the delay.

The players saw it the same way, and Halbach added that the good vibes that the team was feeling not only after the game, but before and during as well as the main reason why the Cyclones were unfazed by the unforeseen downtime.

“We were doing good,” Halbach said. “We’re all happy, so we just sat and played with the puck a little bit and didn’t do too much.”

The laid-back approach clearly worked, as the newly recharged Cyclones were able to successfully regroup for a huge win in the overtime frame that followed shortly after the shattered glass was eventually replaced with a large chunk of plywood.

The win was especially impressive when you consider that the 3-on-3 overtime structure in the American Collegiate Hockey Association generally favors faster, more skilled teams like Central Oklahoma.

However, despite the quickness of their opponent, the unexpected momentum shifts and even the 10-hour bus ride to Oklahoma the day before, the Cyclones found a way get back on track.

The challenge now will be replicating it on Saturday. Junior forward Aaron Azevedo pointed out yesterday that the Cyclones and Bronchos tend to split their series against each other, so one can expect Central Oklahoma to come out motivated for the final regular season game between the two ACHA powers.

However, if Iowa State plays the way they did tonight, the way Fairman and the coaching staff expect, the Cyclones head coach knows that his squad will be a tough out for any team.