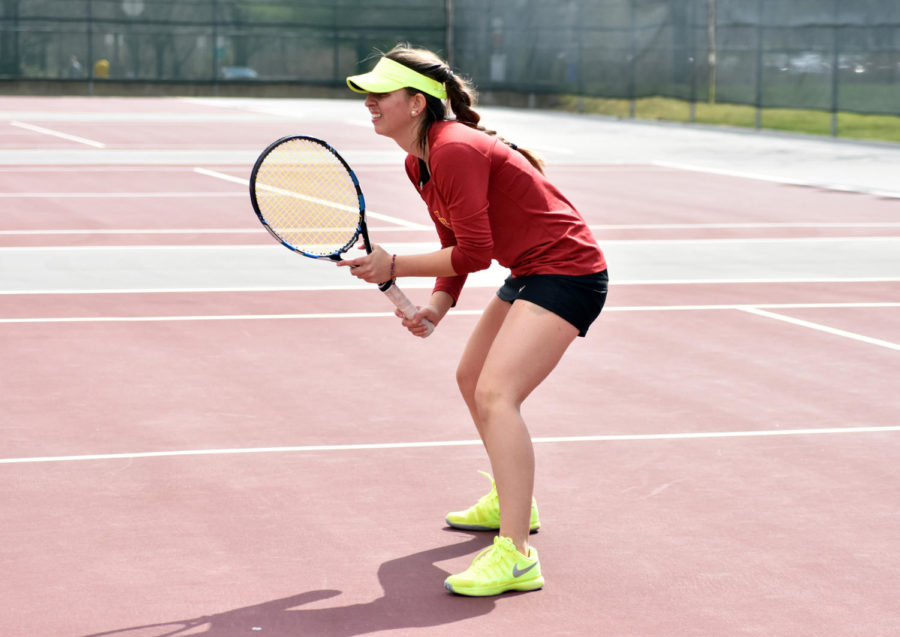 Iowa State freshman Annabella Bonadonna waits for a serve from Kansas at the tennis match on April 10. The Cyclones would go on to fall 4-2. Bonadonna attended high school in Venezuela where she won a national championship from 2010-2013.

The Iowa State Women’s tennis team faced off against the South Dakota Coyotes at the LifeTime Fitness courts in Urbandale, Iowa. Iowa State won the match with an impressive 7-0 win over the Coyotes.

No. 1: Regina Espindola faced off against Jana Lazarevic and in the first set it came down to a tie breaker which Lazarevic won. Espindola kept fighting and in the second set won 6-1 and in the third set 6-4.

No. 3: Ekaterina Repina went against Habiba Aly and only lost one set. Repina won the first set 6-4, lost the second set 1-6 and closed it out with a 6-1 victory.

No. 4: Erin Freeman defeated Anastasia Bondarenko with a 6-4 win in the first set and 6-1 in the second.

No. 2: Repina/Timakova played a tight match this afternoon against South Dakota’s Chemodanova/Bondarenko, winning 5-3.

Iowa State’s next opponent will be Illinois-Chicago on Saturday, Feb. 3 at 10 a.m.