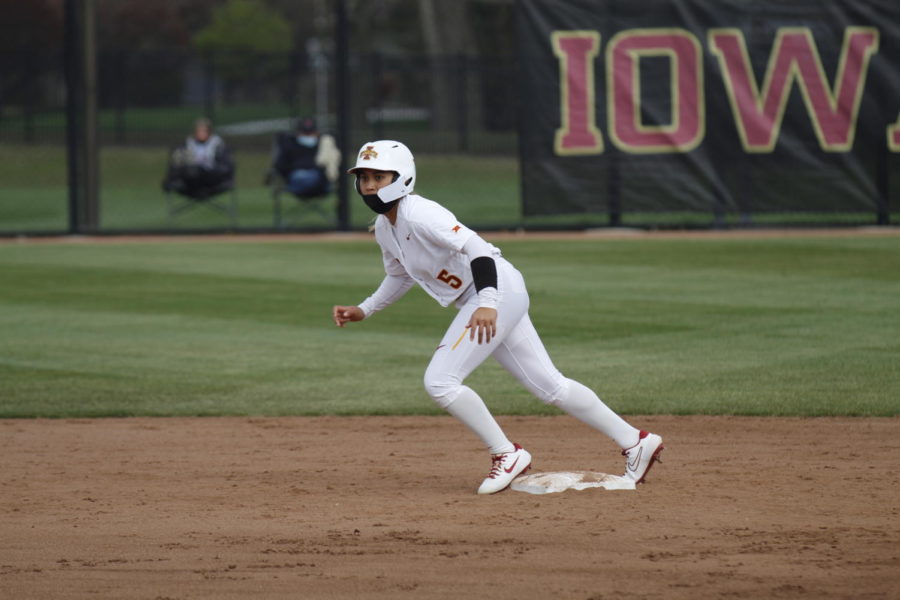 Alesia Ranches getting ready to lead off second base. Iowa State loses 9–5 in their first game of three.

Iowa State was on top of the field at the Doc Halverson UNI-Dome Tournament on Feb. 13 after securing a 4-1 record over the weekend. With wins over in-state rival Northern Iowa and Big 10 opponent Nebraska, Iowa State generated a boost of momentum. The Cyclones outscored opponents 36–19 throughout the tournament.

The Cyclones now head south for a tournament in Las Cruces, N.M.

With five more games ahead of the Cyclones, the team’s focus is on making the routine play defensively and capitalizing with runners in scoring position, according to head coach Jamie Pinkerton.

The Cyclones recorded four errors in their only loss to Drake at the UNI-Dome tournament, several of which came in the middle of Drake’s three-run rally in the top of the seventh inning to take the lead. Ellie Spelhaug’s runs surrendered in that inning were unearned.

“We got to, you know, continue to make the routine play,” head coach Jamie Pinkerton said. “With that particular game, we take the lead and then we make a couple of defensive mistakes. We got to be able to slow the game down.”

Generally speaking, according to Pinkerton, the defense was solid in Cedar Falls. The highlight of the weekend defensively was sophomore Saya Swain’s work in the circle. Swain topped a school record for single-game strikeouts after she punched out 17 Northern Iowa batters on Feb. 13. Swain recorded one win in 2021 and 26 strikeouts. So far, Swain has reached 19 strikeouts and recorded two wins in the young season.

“We’ve known that talent’s been there,” Pinkerton said about Swain. “Last year, she just didn’t get the opportunities.”

Swain’s contribution is a weight lifted off the shoulders of the leaders in the pitching staff, Pinkerton said. Last season, Ellie Spelhaug and Karli Charles handled a large chunk of innings pitched. Charles threw 137 innings, Spelhaug threw 135 and the next closest pitcher threw 52 total innings.

“We just taxed Ellie and Carly too much last year,” Pinkerton said.

The key for Swain, Pinkerton said, was keeping the Panther hitters off balance by mixing pitch speed and location and executing the game plan.

After a powerful offensive performance, the Cyclones are looking to fine-tune at-bats with runners in scoring position. Again, it will take slowing the game down, Pinkerton said.

Iowa State slugged for five home runs and 13 doubles while at the UNI-Dome.

“We really try to go in with the same approach,” left fielder and lead-off hitter Carli Spelhaug said about handling high-pressure situations with runners in scoring position.

As with every at-bat, dictating the at-bat and swinging at hitter’s pitches is what goes into making the timely hit for Spelhaug. For junior Alesia Ranches, it’s having a short-term memory.

“Just forgetting about everything prior to that bat; just having a clear mindset,” Ranches said.

Ranches plays shortstop for Iowa State and bats seventh in the order. Ranches provided the Cyclones a grand slam in the first inning against South Dakota State.

Games will start against host school New Mexico State Friday at 5:30 p.m. The Cyclones will continue with doubleheaders Saturday and Sunday.