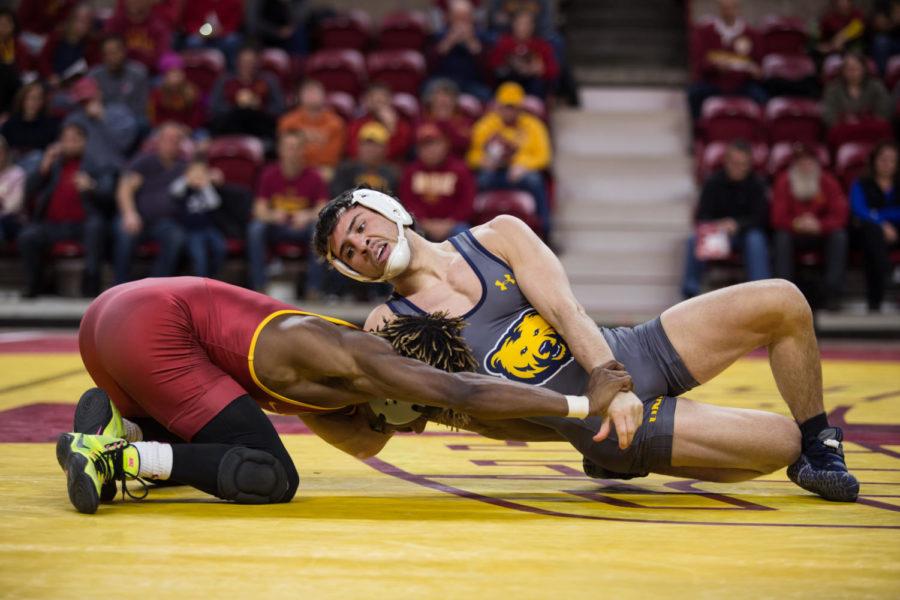 To start the dual against Virginia, freshman 125-pounder Sinjin Briggs made his debut at Iowa State. The walk-on avoided getting pinned, but lost from a 20-4 technical fall.

The bonus points carried into the 157-pound match for the Cyclones. Redshirt sophomore Chase Straw picked up a 24-6 technical fall; Iowa State controlled a 14-8 lead.

Redshirt senior Dane Pestano took back the lead for the Cyclones, after Pestano cruised to a 20-7 major decision.

Redshirt sophomore Joe Teague made his first dual appearance this season, but the 197-pounder failed to capitilize on the opportunity, losing 9-7. Virginia and Iowa State were tied at 18.

In the final match at heavyweight, Iowa State’s redshirt junior Marcus Harrington fell behind 1-0 after two periods. In the final period, Harrington came back to win the match, 3-2, while securing a victory for Iowa State.

After a short break, Iowa State matched up with No. 10 Arizona State.

The dual started with Briggs losing via technical fall again. Iowa State was behind 5-0.

Coach Kevin Dresser elected to start redshirt freshman Ian Parker at 133-pounds. It worked out for the Cyclones, as Parker managed to snag a 4-0 win.

Degen’s strong day continued against Arizona State. Degen won by a 16-8 major decision over Josh Maruca. Intermat has Maruca ranked as the No. 16 149-pounder.

Danny Bush had a tough assignment against Arizona State’s Zahid Valencia. Intermat ranks Valencia as the top 174-pounder and in 2:26, the redshirt junior was pinned by Valencia. Arizona State’s lead grew to 19-10.

Dresser stuck with Teague at 197-pounds. Teague controlled the match, snagging a 5-1 decision with 3:13 of riding time. Even with the win at 197, Iowa State was still behind 22-13.

After the 1-1 start, Iowa State earned a spot in the Silver Bracket.

Briggs received a fresh match, but the same result. The freshman lost in a 16-1 technical fall.

Parker started again at 133-pounds. The redshirt freshman added another victory with a 5-1 decision.

Storr faced the No. 13 141-pounder Alex Madrigal. Madrigal failed to finish the match due to a shoulder injury; the injury gave the Cyclones a 9-5 lead.

After three-straight wins, Straw was unable to continue the streak for Iowa State. Straw lost 6-4, trimming the Cyclone lead to 12-8.

Before Old Dominion started to get too much momentum, Breitenbach slowed them down.

Breitenbach extended Iowa State’s lead to 15-8, after winning a 7-2 decision.

Against Old Dominion, Pestano bounced back after a loss from Arizona State’s Kordell Norfleet. The redshirt senior used all of the three periods to tie Old Dominion’s Antonio Agee.

In sudden victory, Pestano took down Agee, resulting in a win and Iowa State’s lead swelled to 18-12.

Harrington added to the score with a 7-2 decision over Ali Wahab.

Iowa State will turn around and wrestle No. 20 Lock Haven on Saturday at 9 a.m.