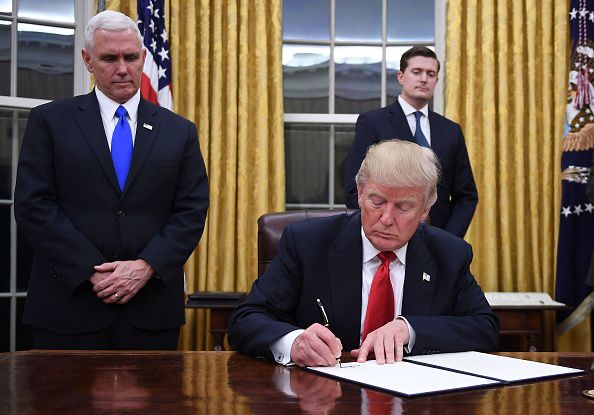 US President Donald Trump signs an executive order as Vice President Mike Pence looks on at the White House in Washington, DC on January 20, 2017.

Mompremier described growing up in the rural town of Caiman, Haiti as different from what the usual scenery that people would see of the country such as Port-au-Prince, Haiti’s capital.

“A lot of development could happen,” Mompremier said. “A lot of people don’t know about it.”

On January 12, 2010, a 7.0 magnitude earthquake hit Port-au-Prince, Haiti severely damaging the capital and impacting the country.

Mompremier was 11 at the time of the earthquake and recalled she had been playing outside with her younger sister and friends. The group of children were sitting around the tree, resting after running around.

“Suddenly the bench, the one we were all sitting on underneath the tree, was swaying back and forth,” Mompremier said.

Mompremier said that from a distance she could see her parents yelling at the children to move from underneath the tree because it could fall on the children.

Her parents knew that something bad was happening when they noticed the pick-up truck in their yard bouncing up and down like there was a person jumping in the vehicle.

Mompremier’s father attempted to reach out to his family in Port-au-Prince and was unable to get in contact with them.

“All the cell towers were down, and we were like ‘that’s weird,’” Mompremier said. “Finally go on the internet and realize that we had an earthquake in the middle of Port-au-Prince.”

With over 100,000 casualties, Mompremier said that her family was one of the only families she knew to not have at least one casualty in the earthquake.

Mompremier said that Port-au-Prince wasn’t well constructed and everything collapsed in the earthquake.

“No one knew we were sitting on the fault line,” Mompremier said. “They are two fault lines in Haiti and each of them run through the two major cities and we didn’t know that until that happened.”

While Mompremier and her family stayed in Haiti following the natural disaster, thousands of Haitians migrated to the United States and in result the migrants were granted Temporary Protected Status (TPS), which provided work authorization in the United States and relief from deportation.

In May 2017, following a six-month extension of TPS, TPS holders were told to “prepare and arrange for departure” by Homeland Security secretary, John Kelly. On November 20, 2017, it was announced that TPS for Haitians was to expire on January 22, 2018.

During talks about immigration protection for immigrants from Haiti, El Salvador and African countries on Jan.11, it was reported that President Donald Trump said “why are we having all these people from shithole countries come here?” Then Trump is alleged to ask why can’t the United States bring people from countries such as Norway.

Mompremier said that Haiti has blatant corruption within the government, and with the United States, she was impressed by the presidents and government, which seemed less corrupt.

Mompremier said that the comments by Trump make her very disappointed and sad in him and that the countries shouldn’t be viewed that way.

“I don’t really feel angry, I feel sad because he’s missing out on this whole huge culture that is rich,” Mompremier said.

She also said that Trump’s comments imply that Haiti, as a country, isn’t being taken care of.

“It kind of negates everything that the founding fathers wanted America to be,” Mompremier said, adding that there isn’t a welcoming and accepting feeling for outsiders to the United States anymore.

“The leader of the free world doesn’t say things like that,” said Peter Deveaux-Isaacs, senior in political science and member of the Pan-Caribbean Community. “He’s supposed to be representing the people.”

Mompremier said that her family as of Friday morning were not aware of the circulating comments Trump made and she said that she is unsure what the reactions would be from Haitians.

Deveaux-Isaacs said that as a Bahamian, he has more of a pity feeling than an anger feeling.

“You miss out on this [cultural] perspective,” Mompremier said.

“You turn off an entire part of the world, I don’t know how you can afford to do that.” Deveaux- Isaacs said.

He also said that any Caribbean people would feel uneasy about the comments and can assume that if he is saying the comments about Haiti, his views of the other countries are similar.

“When you say things like that, everyone is going to feel uneasy,” Deveaux-Isaacs said.

As a political science major, Deveaux-Isaacs said that allies of Haiti will have issues with the comments and other countries would take Trump’s comments as a sign of weakness.

“They’re saying ‘OK, they’re no longer trying to be the leader of the free world,’” Deveaux-Isaacs said.

Mompremier said that she hopes this situation becomes a wake-up call for Americans, citing that Trump represents the United States to the rest of the world.

“I don’t hope that there is a lot of anger and bitterness toward it, I just hope people take it and turn and say, ‘maybe we should rethink our decision on the leaders that we have at the moment,” Mompremier said.