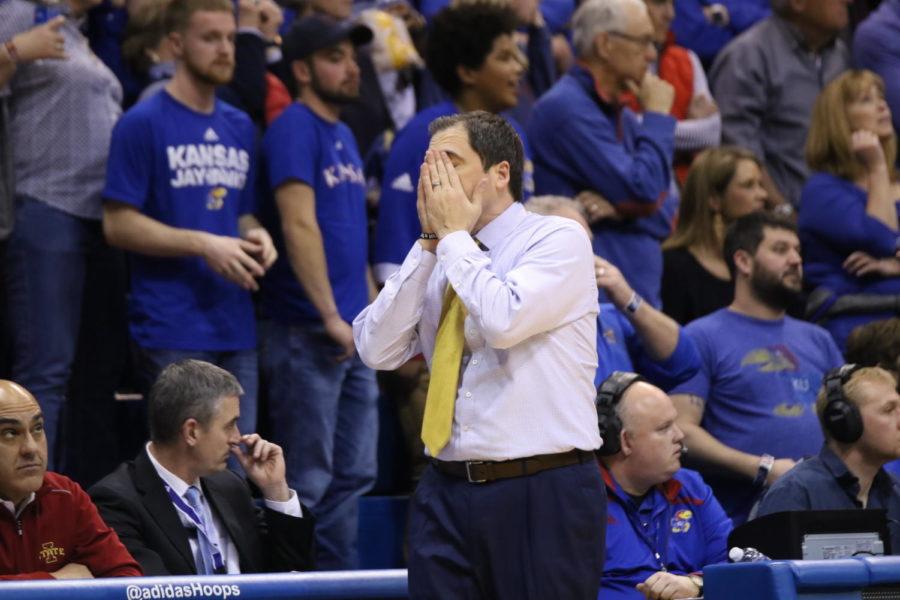 Iowa State head coach Steve Prohm buries his head in his hands after an intentional foul is called on the Cyclones in the final minutes of the 83-78 loss at Kansas.

The Iowa State men’s basketball team is currently on a four-game losing streak, putting them dead-last in the Big 12 standings.

But that’s not necessarily a fair representation of how the team has played since the start of Big 12 play four games ago.

“We’re getting better,” said coach Steve Prohm. “It’s a process of learning every day… we have made a lot of strides from the beginning of the year to the first conference game to now.”

Over the first four games of the Big 12 slate, Iowa State is winless. But that’s not all.

Iowa State led Texas by two points with one minute to play. Texas tied the game and sent it to overtime, where they eked out a four-point win.

Most recently, the Cyclones went to Lawrence, Kansas, and fought to the end against the No. 12 Jayhawks. The game was tied at 73 apiece with 3:46 to play before Kansas went on an 8-0 run and took control down the stretch.

To put it simply: Iowa State has gone toe-to-toe with its last three Big 12 opponents, but ultimately came up short at the very end. If just a handful of plays had gone slightly differently, the Cyclones could be 2-2 or even 3-1 in conference play.

“The last four minutes we have to be better,” Prohm said.

The good news for Iowa State? Baylor comes in on a similar skid.

The Bears went 10-2 in non-conference play, but have since lost three of their four Big 12 games. Baylor hasn’t beaten a Division I team away from the Ferrell Center since knocking off Creighton on Nov. 21.

“They’ve got us beat size-wise,” said redshirt freshman Cameron Lard. “But I feel like our pace and the way we run our offense, we can beat them. We’ve just gotta come out and execute.”

Lard has a point. Baylor is led by 7-footer Jo Lual-Acuil. The senior is averaging 15.8 points and 9.8 rebounds per game this season. Against Texas, which features star freshman center Mo Bamba, Lual-Acuil posted 17 points, six rebounds and four blocks.

As far as the pace Lard mentioned? The Bears are currently ranked 335th nationally out of 351 Division I teams in adjusted pace, per KenPom. Iowa State is 112th, but a point of emphasis for Prohm has been to push the pace.

Baylor plays a good amount of zone, so that will be the focus for Iowa State’s offense as they try to break the losing streak. In the past, players like Georges Niang and Deonte Burton were ideal zone-breakers because of their versatility and ability to score in traffic. Iowa State doesn’t have that luxury this season.

“There’s a right way to attack it and a wrong way to attack it,” Prohm said. “And so we’ve got to just find the right fit to put in the middle [of the zone]… it may be trial by error for a little bit.”

“We’ve been getting better and better each game,” said freshman guard Lindell Wigginton, who scored 27 points in the loss to Kansas. “The last two games were real good. We just couldn’t come out with the win at the end. But I feel this is gonna be a good game and hopefully we can come and get a win.”