The strength of Iowa’s native roots 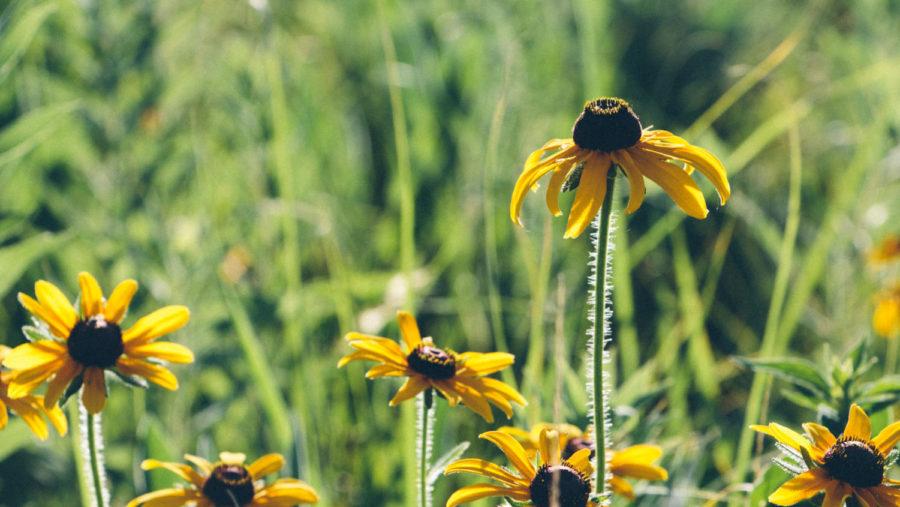 Doolittle Prairie is located less than 10 miles north of Ames, and is home to a variety of native flowers, prairie grass and wildlife.

Megan Gilbert, Contributor To The Daily

Iowa was once quilted in tall green grasses and sprinkled with colorful wildflowers waving back and forth in the wind which swept across the open plain. Then the land began to change.

The first changes to the land accompanied the first settlers in the 1830s. The rich, fertile soil was upturned and seeds were sown. The natural prairies slowly began to disappear, replaced by small fields.

As word of Iowa’s rich soils and bountiful harvests spread, more people flooded into the state, increasing the demand for food, and the small fields grew. Where the tall native grasses once grew undisturbed, corn and soybeans are cropped into perfectly straight, endless rows.

Today, 85 percent of Iowa’s land is farmed and the lush grasslands have all but disappeared, but they’re not the only thing to have vanished.

Protected by the deep, complex root system of natural prairie grasses and flowers, Iowa’s rich soil could withstand heavy rainfall and wind. As these plants were eradicated, the soil began to migrate, blown or washed away by natural processes, taking with it the nutrients that make it so desirable.

As the soil and its nutrients moved, farmers began to add chemicals to their fields in an attempt to supply their crops with the same rich soil they once had. The problem with this, however, was that the chemicals these farmers were pumping into the soil began to find their way into the water system.

Although the expansive seas of grasslands have disappeared, small strips of prairie grasses and wildflowers have started to appear in fields across the state in an attempt to provide a natural buffer from erosion and keep chemicals from reaching rivers and lakes.

Prairies act like a blanket over soil said Richard Cruse, professor of agronomy. Exposed soil is vulnerable to erosion, particularly rainfall, but the natural grasses of Iowa create an “open-pore system” that allows water to be absorbed by the soil instead of running off and carrying soil and nutrients along.

These strips of native plants are composed of wildflowers and prairie grasses that would have naturally grown in the area. To design effective prairie strips for fields across the state, the Department of Natural Resources (DNR) has to make educated guesses as to the plants that might work well in one area or another said Todd Bogenschutz, a wildlife researcher with the Iowa DNR.

As these prairie strips prevent the movement of soil, they are also preventing the chemicals that are applied to fields from being carried into the water system.

“Prairie strips are one simple way that farmers can keep nitrogen from getting in the water system,” Bogenschutz said.

Between 1850 and 1950, approximately 260 million acres of natural grasslands were tilled and converted into farmland in Iowa, Minnesota, Nebraska, North Dakota and Montana, while another 30 million were converted before 1990.

Some species are particularly attracted to certain plants and flowers and, in turn, will flock to where they can be found, Bogenschutz said. The benefit of native species is that they can benefit the entire ecosystem, from the song birds to the insects.

Small areas of prairie that avoided destruction are like a window into the past, providing an idea of what plants work in different areas across the state said Ryan Schmidt, the Land Stewardship Director with the Iowa National Heritage Foundation.

“The benefits are tremendous,” Schmidt said. “The biggest challenge is just introducing a new idea to a farmer who has worked on the same land for years or decades.”

As crop prices rise and more insurance subsidies are available for farmers, Schmidt said that it can be difficult to persuade private land owners to convert farmland into grass or wetland areas.

Todd Nielsen, an Iowa farmer, decided to incorporate cover crops into his farming rotation in Wright County because he didn’t have enough manpower on his family farm to till all of his land following the annual harvest.

The concept of environmentally-conscious farming practices wasn’t new to Nielsen, who already controlled rain runoff from his fields using a special tile system, but he was surprised by the impact that cover crops had on his fields.

“I found that the quality of our soil improved drastically,” Nielsen said. “The cover crops weren’t allowing the soil to erode during the winter season like it had in the past, so all of the nitrogen-rich dirt was staying in place.”

Cover crops are different from prairie strips in that they cover the entirety of a field and consist of different types of grains that are planted after the harvest.

While Nielsen noticed the direct impact of cover crops on the quality of his soil, he was also taking steps to lessen his farm’s environmental footprint through the use of a bioreactor, or a trench that water passes through and deposits nutrients before running off the field. This simple method keeps nitrogen and other nutrients out of the water system.

In recognition of his efforts to farm in an environmentally conscious manner, Nielsen received the Iowa Farm Environmental Leader Award in the fall of 2017. This award is presented to Iowa farmers who are committed to healthy soils and improved water quality by the Iowa Department of Agriculture and Land Stewardship, the governor and lieutenant governor.

Prairie strips and grasslands are only a few things that farmers can do to lessen the impact of commercial farming practices said Matthew Helmers, professor of agricultural and biosystems engineering and the lead researcher with Science-based Trials of Rowcrops Integrated with Prairie Strips (STRIPS).

“We have people that are active on a day-to-day basis doing research on water quality, soil erosion and wildlife protection,” Helmers said. Though most prairie strips only occupy 5 to 10 percent of a field, they can make a lasting impact.”

“The research is beginning to show the benefits of having these prairie strips,” Schmidt said. “We have to realize that environmentalists and farmers are both on the same sideline. We both care about the land and want to help in some way.”