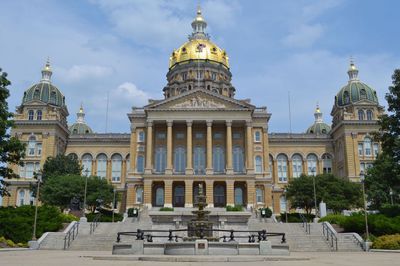 The Iowa Legislature is back in full swing, which means we are going to be tackling, and hopefully solving, important issues like funding for higher education and clean water. That’s what we should be doing, right?

Unfortunately, that isn’t always what happens.

Silly, time-wasting bills are being proposed in the Iowa Legislature that take time and energy away from the important issues.

Bills like House File 2031, which intends to create a class that teaches the Bible in public classrooms, are a prime example of this. This bill is clearly nothing but a way for the politicians who proposed this bill, like Dean Fisher and Skyler Wheeler, to keep their Christian voter bases happy.

The only thing this bill will accomplish is making sure they get reelected and get to keep putting forth insane legislation that they know won’t have a chance of being passed.

The other glaring example of a wasteful bill is House File 2017, a bill proposed last year that intended to eliminate the entire Iowa Department of Public Health and transfer their responsibilities to other departments.

That’s right. The entire Iowa Department of Public Health. The whole thing. A department which, among many other things, is tasked with preventing the spread of diseases, responding to public health emergencies and protecting citizens against environmental hazards.

And lawmakers know this.

Often times, bills like these are just tools to appeal to voters or waste time so the bills they don’t want to pass are bogged down by all these unnecessary bills. They slow down the process and try to make it harder to pass meaningful legislation.

The most insulting thing about this is that the Iowa Legislature only meets from Jan. 8 to April 17. That is only four months. We don’t have time to be messing around with ridiculous bills. There are important issues that need to be solved. Our legislature can’t waste time, our time and their time, debating whether or not it should eliminate the Iowa Department of Public Health.

Contact your legislator today, which you can find at www.legis.iowa.gov/, and let them know what issues you want them to be focusing on. Make sure they don’t waste your time and do focus on the important issues that we only have four months to solve.