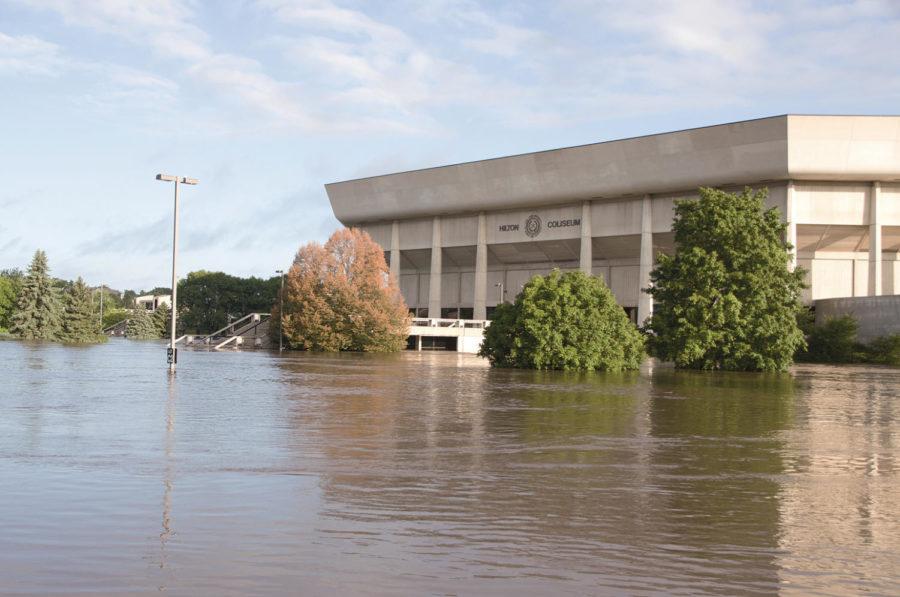 Megan Gilbert, Contributor To The Daily

There had been reports of heavy rainfall through the night of Aug. 12, 2010, and by the first light of day, Squaw Creek and the Skunk River had poured over their banks and were spilling into Ames.

The deluge came too quickly to save an Iowa State icon. Hilton Coliseum was under water.

Iowa State head women’s basketball coach Bill Fennelly fought his way through traffic just after sunrise on the morning of Aug. 13, rushing in an attempt to save the arena that meant so much to the Ames community, the team and himself.

When he walked into Hilton, Fennelly said, his heart shattered.

He recalls the murky water, littered with debris that filled the lower level of the arena. A volleyball net floated at the top, predicting the inevitable end of the team’s season in Hilton Coliseum.

Jamie Pollard, Iowa State’s athletics director, said that it was impossible for people to imagine the way that water filled the arena. Not only was there eight feet of standing water where the court should be, but also two stories of offices, locker rooms and storage areas below were flooded.

His first concern was that the structure had sustained damages that would condemn the building.

As the rain subsided and the floodwaters receded, Hilton, which lies below ground level, remained a swamp.

Where the court once gleamed under the bright lights of the arena, a pile of waterlogged debris sat in a messy heap. Indicators that the area had once served a purpose other than being a wasteland were visible everywhere. Lockers, arena seats, balls and gymnastics equipment were all mixed into the waste, ruined by the flood.

After the last of the water was pumped out of Hilton, a team of administrators, engineers, city planners and insurance agents came together to create a plan for future flood threats.

A plan for watertight walls was the result of dozens of consultations and meetings, Pollard said. Stored in Hilton Coliseum, they are designed to be put up before a storm and can easily be taken down once the threat has passed.

Hilton Coliseum is prone to flood damage because of its close proximity to both the Skunk River and Squaw Creek, the two main waterways in Ames.

Hilton lies on what’s called a ‘100-year flood boundary,’ or an area that will flood at least once in a 100-year period. While Hilton doesn’t sit directly within this boundary, it lies directly adjacent, making it vulnerable to flood damage.

The Federal Emergency Management Agency, better known as FEMA, is an agency under the United States Department of Homeland Security and provides relief to communities that have been damaged by natural disasters. However, in order for a community to get flood insurance under FEMA, there must be what’s called a “floodplain ordinance,” which outlines the parameters for building as it relates to a given floodplain.

In the city of Ames, the floodplain ordinance requires any new construction to be built at least three feet above the minimum flood level, or the lowest level that water is expected to rise in the event of a flood in the area.

Following extreme flooding in 1993, the city of Ames changed its floodplain ordinance, which at the time only required structures to be built a foot above the minimum flood level said Charlie Kuester, Ames’ city planner.

However, Kuester said, Iowa State isn’t subject to city ordinances because it’s a government agency and not required to submit to land use regulations.

Barb Sturner, an external affairs specialist with FEMA, said that Iowa State is progressive with its approach to flood protection and recalled the swift efforts to develop a floodwater mitigation plan in the community following the flood of 2010.

“By the time you figure out whether it’s going to touch the building, it’s usually too late,” Sturner said. But Iowa State wasn’t going to let flooding get in its way again.

On Sept. 22, 2016, floods again threatened Ames. This time, however, teams came together to install the water mitigation systems that had been designed to protect Hilton Coliseum before the rain came. As the first of the dark storm clouds rolled in, thick plates of steel formed a watertight wall of defense around the arena.

As flash flood warnings continued to warn citizens, water spilled out into the streets of Ames, stranding cars and causing CyRide, Iowa State’s bus system, to suspend its services until the rain subsided. Though much of Ames suffered water damage, the water never reached Hilton or its new armor.

“This wasn’t the first, and it won’t be the last time that something like this happens,” Pollard said.

Next time, Hilton will be ready.