Iowa State prepares for Baylor in David vs. Goliath game 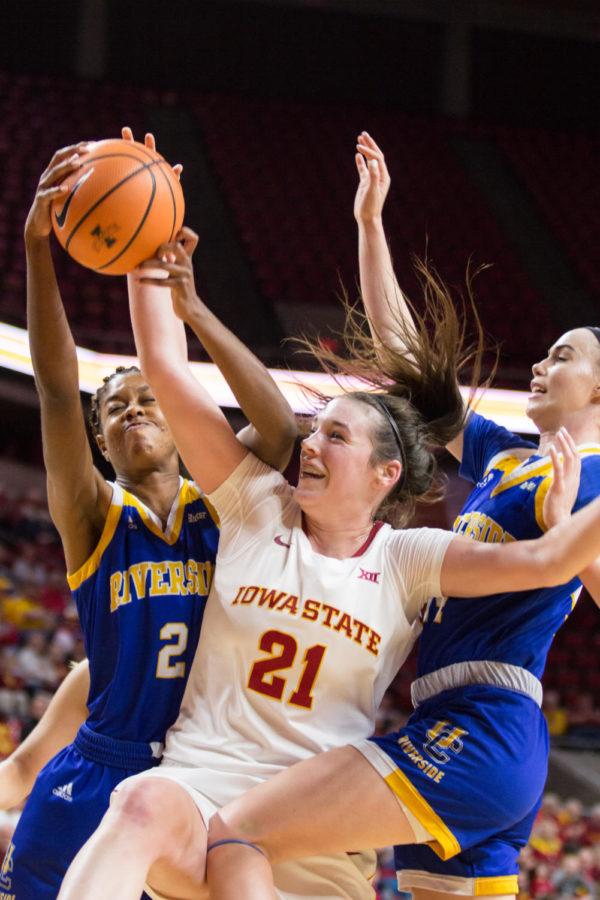 Junior guard Bridget Carleton goes up for a rebound during their game agaisnt UC Riverside Dec 17. The Cyclones defeated Riverside 89-66.

Coach Bill Fennelly and the Iowa State women’s basketball team, in a perfect world, would have handed Baylor a loss on Jan. 3. In an even more perfect world, the Cyclones would also have a chance to knock off the No. 4 Bears Wednesday night. But it’s not a perfect world.

“Everybody has slumps, everybody missed a lot of shots,” said senior guard Emily Durr. “Even me.”

Come Wednesday at 8 p.m. at Hilton Coliseum, the Cyclones need a near-miracle to hand Baylor just its second loss of the season. Heck, two Wednesday’s ago the Bears shellacked the Cyclones by 40 points — the worst of Fennelly’s Iowa State career.

“I don’t think it matters to be honest with you,” Fennelly said of having just seen Baylor two weeks ago. “Baylor’s Baylor. They’re gonna play the way they play.”

Simply put: a miracle and perfect game is needed. And while the Cyclones haven’t put together a “perfect” game this season, it seems far-fetched to think that game would come against one of the best teams in the country.

The Baylor loss was the second of a four-game losing skid. The West Virginia loss and a squandered lead against Kansas State rounded out that stretch. Last time out the Cyclones defeated Texas Tech to end the skid.

“In the last game [against Texas Tech] I think our kids, with the exception of probably the first half at Baylor, have really, really competed and put themselves in good spots,” Fennelly said. “Your reward is Baylor on Wednesday.”

That win against Texas Tech may provide just enough confidence for the Cyclones to keep it a close game. That confidence was something they haven’t had in a long time.

And confidence will be key in the rematch against Baylor. The Bears have seemingly sleep-walked through the Big 12 schedule. They are 5-0 and their average margin of victory in that span is 35 points. Heck, their closest Big 12 game was a 22-point win over Oklahoma.

With Bridget Carleton in a bit of a shooting slump, shooting just 27.9 percent in her last five outings, the Cyclones need their star junior to utilize two off days and rest up. Fennelly even joked that he told Carleton if he saw her in the gym on Sunday, he wouldn’t let her see a lick of playing time against Baylor.

“Yeah, [Coach Fennelly] texted me after our game and was like, he didn’t want to see me in the gym,” Carleton said. “I told him I’d probably go crazy if I didn’t come shoot, but he said I could come in [Monday] to shoot.”

With Carleton rested, the Cyclones still have a tall task in front of them.

While Fennelly said they’ll have a plan ready to at least try and slow down Kalani Brown, the Bears’ leading scorer, and the rest of her team, he also noted that they’ll need some help from Baylor as well.

And what is that help?

Well, everything, even including the frigid Iowa weather.

“Maybe we’ll leave the doors open a little bit longer Wednesday when they get here,” Fennelly joked. “Let them enjoy the beautiful weather here in the Midwest.”