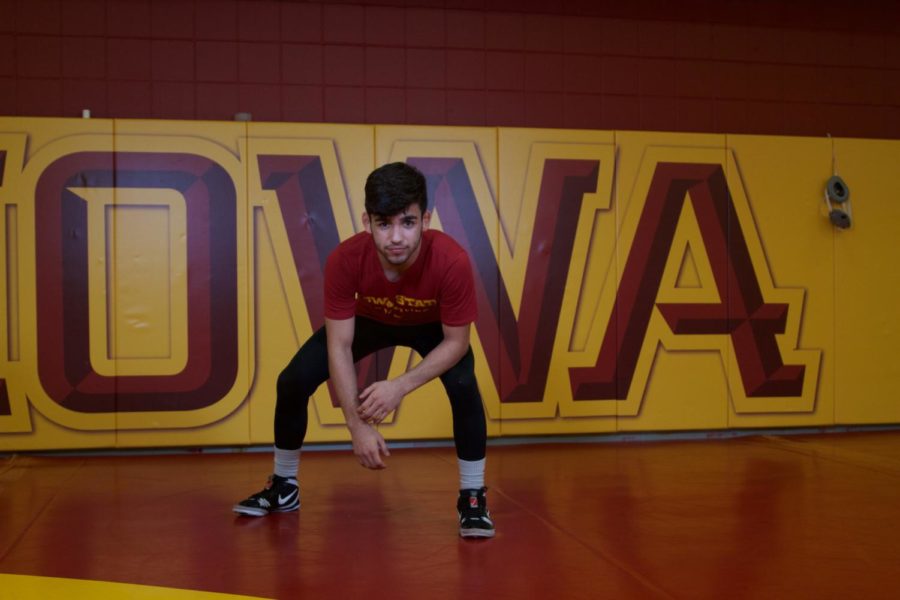 On Oct. 7, redshirt senior walk-on Kyle Kempt etched his name in Iowa State history, orchestrating a 38-31 win over the then-ranked No. 3 Oklahoma Sooners.

Not only was Kempt’s dominant performance a surprise, but the fact that the backup played significant snaps at Iowa State also surprised many.

Cyclone fans spent the fall watching Kempt transform into a key piece in Iowa State’s offense, but inside Iowa State athletics the long-shot stories didn’t end after Iowa State football capped off the season with its Liberty Bowl win.

As winter began, the seats in Jack Trice Stadium replaced the Cyclone fans with snow, while Hilton Coliseum shuffled from hardwood to wrestling mats.

While the football team swapped bodies around at the quarterback spot, it was the 125-pound spot that cycled through a handful of athletes for the wrestling team.

“[At Virginia Tech] I’m sure we went through some bumps, and we had a few bodies in there that were kind of just bodies,” said Iowa State wrestling coach Kevin Dresser.

At the start of the wrestling season, redshirt freshman Daniel Vega and redshirt junior Jonathan Marmolejo anchored the 125-pound spot.

When November rolled around, news broke that Vega was leaving Iowa State’s program.

Late in the summer before the season started, club wrestler Jakob Allison sent Dresser his résumé. With a thin roster at 125, Dresser brought Allison on as a walk-on.

With Vega’s departure, Allison inched closer to playing an important role for the Cyclones.

Allison’s first taste of wrestling in Hilton Coliseum came on Nov. 4 at the Harold Nichols Cyclone Open. The Waukee, Iowa native wrestled unattached for the Cyclones, finishing in third place of the freshman/sophomore division.

“[Allison] definitely has work to do,” said associate head coach Mike Zadick after the Harold Nichols Cyclone Open. “[He] probably didn’t have the results he wanted this weekend, but he did a good job going out there and kind of throwing it out there.”

Eight days after the Harold Nichols Cyclone Open, Allison received an opportunity in a dual. Allison lost to Drexel’s Tanner Shoap in a 5-0 decision, but the walk-on held his own.

At the next dual, Marmolejo cracked the lineup, but the 125-pounder lost in a 10-1 decision. In Iowa State’s final dual before an extended winter break, Dresser penciled Allison’s name into the lineup.

Allison exploded. The sophomore picked up a pin in 3:48. Allison’s three extra points off the pin ended up as the Cyclones’ only bonus points in the dual.

Iowa State entered its break, but Marmolejo didn’t return to the team. Iowa State’s 125-pound depth shrunk to only Allison.

The lack of depth provided a less than ideal situation, but with Allison emerging as a solid wrestler, the Cyclones leaned on the walk-on.

All of a sudden, Allison went from a club wrestler his freshman year, to a walk-on practice body, to a starter on a Big 12 team the next year.

Allison’s stint in the dual lineup was short-lived.

Two days later, Oregon State rolled into town, but the Cyclones entered the dual with no 125-pounders.

The depletion of 125-pound wrestlers hurts a team more than other weights because there isn’t a wrestler in a lower weight class than 125 who can be bumped up; as a result, Iowa State sacrificed a forfeit at 125, along with six team points.

On the Saturday sandwiched between the Northern Colorado and Oregon State duals, Sinjin Briggs — a walk-on freshman 125-pounder — competed at the Pat ‘Flash’ Flanagan Open.

“I think we get a kid [who] wasn’t a blue-chip guy,” Dresser said about Briggs. “He’s come in and he’s working hard and he’s excited to be an Iowa State Cyclone.”

What prompted Briggs to join the team? The freshman went through his first semester of college with wrestling withdrawals.

“A month before break or so, wrestling season rolled around, [and] it’s something I’ve always had,” Briggs said. “Not having it in my life was weird, so I thought about transferring a little bit.”

After Briggs heard that Vega planned on transferring, the freshman sent an email to Dresser. Then, Briggs talked to Zadick and accepted a chance to walk on at Iowa State.

Briggs practiced with Allison, until Allison shattered his hand. After Allison’s injury, Briggs faced another change and wrestled with freshman Tanner Lundgren.

As Briggs eased his way onto the team, a pair of young leaders in Iowa State’s wrestling room, Kanen Storr and Jarrett Degen, assisted Briggs with the transition.

“Storr, [Tanner] Lundgren and I hang out a lot together,” Degen said. “Right when [Briggs] started to join the team, we invited him to eat dinner with us, and he’s one of our good buddies now.”

The walk-on received his first opportunity to compete for the Cyclones at the Virginia Duals. Iowa State wrestled against four schools in two days; Briggs and the other school’s 125-pounder kicked off all five duals.

Briggs lost via technical fall in the first three matches. On the second day, the 125-pounder picked up a win off a forfeit and lost in a 15-3 major decision to close out his weekend.

Generally, a 1-4 weekend isn’t looked at as a positive, but for Briggs it’s something to build on. Instead of forfeiting the 125-pound spot and starting in a 6-0 hole, Briggs saved a point or two each dual.

On Sunday, Briggs managed to avoid a pin in his Big 12 debut against All-American Zeke Moisey, losing 18-2.

It’s impossible to know what the future holds for Briggs in an Iowa State singlet. Who knows, maybe the long-shot grappler will catch an opponent sleeping and pull off a Kyle Kempt-esque upset.