After a strong offensive half, poor shooting and defense sinks the Cyclones 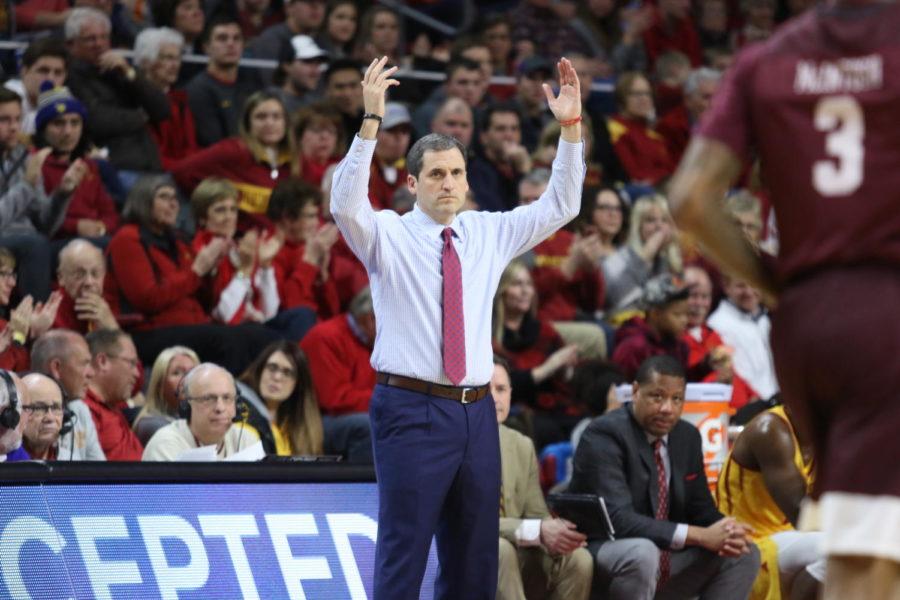 Iowa State head coach Steve Prohm tries to excite the crowd after a Solomon Young score during the first half against Maryland Eastern Shore.

It was a tale of two halves for Iowa State’s young basketball team.

A large part of Iowa State’s non-conference success correlated with the success of the freshmen and sophomores.

In Iowa State’s 91-75 loss to Kansas State, the winning recipe remained the same.

The Cyclones leaned heavily on the freshmen and sophomores, but the young players failed to sustain their hot start.

“I think we [were] lacking toughness tonight,” said sophomore Solomon Young. “[We had] a lot of physical mistakes, and those type of things really cost you in this conference, so if we can just get those small things right, we’ll be fine.”

On Iowa State’s opening offensive possession, freshman guard Lindell Wigginton connected behind the 3-point arc, picking up the Cyclones’ first points. That was just the start of the freshman’s dominant Big 12 debut.

Wigginton emerged as the primary scorer in the first half, going 5-for-5 from the field, including two 3-pointers. The Nova Scotia native would tack on three more points from the free throw line.

“Missed free throws, it costs you [at] the end of the game,” Wigginton said. “I know I miss a lot, personally. Trying to get wins in this league, you can’t go that [low of a] percentage from the free throw line.”

Down low, Young took care of business. In the first half, Young added 12 points and two rebounds, while efficiently making five of his six free throw attempts.

Another freshman, Cameron Lard, imposed his dominance on the Wildcats, too. A little over five minutes into the first half, Lard swatted a Kansas State shot attempt.

Immediately, the Wildcats recovered the ball and lobbed an alley-oop. Lard snatched the ball out of the air, dumped it off to junior Nick Weiler-Babb and soared for a monstrous alley-oop at the other end.

Near the end of the first half, Lard sent Hilton Coliseum into another frenzy. Finding an opening in the Wildcat defense, Lard received a pass from Wigginton.

Lard hammered it through the hoop again, but this time, Kansas State’s Levi Stockard III was hanging on the 6-foot-9 freshman, resulting in a three-point play.

While the young players thrived, senior guard Donovan Jackson struggled. Jackson made a mid-range jumper, but the senior was limited to two points in the first half. Jackson’s rough start continued; Jackson went scoreless in the second half.

With Wigginton, Young and Lard scoring with ease, Iowa State’s offense put itself in a good position to lead. The defense incompetence, outweighed the quality offense.

“Defensively, the second half, as well in the first, just unacceptable,” said Iowa State coach Steve Prohm. “Very, very disappointing. [It] kind of takes you back to the beginning of non-conference season.”

In the first half, 51 of the Wildcats’ 53 points were courtesy of the Kansas State junior trio. The three players combined for 78 of Kansas State’s 91 points.

Stokes and Wade were sharpshooters from behind the arc, draining 10 of their 13 attempts. Brown did a large portion of his work from the charity stripe, chipping in six made free throws.

While the Cyclones worked through their shooting woes, Kansas State picked up where it left off. Wade exploded in the second half after his strong first half. Wade added 16 more points, finishing his career-night with 34 points and eight rebounds.

Brown tacked on nine points in the second half, and the Cyclones managed to limit Stokes to two points.

Ultimately, poor shooting in the second half, paired with subpar defense throughout the night doomed Iowa State, spoiling the Cyclones Big 12 opener.