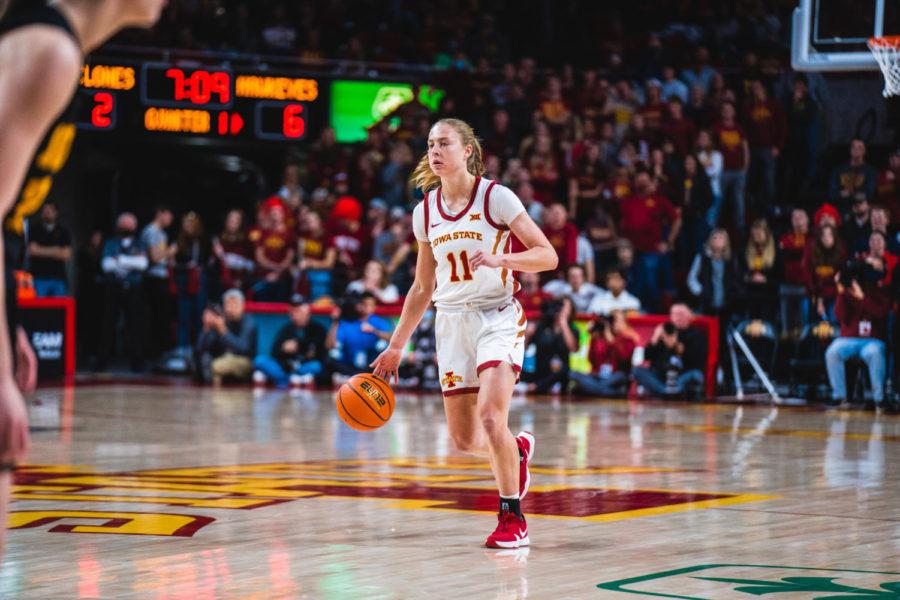 Iowa State sophomore Emily Ryan surveys the floor in the Cyclones' 77-70 win over No. 12 Iowa on Dec. 8.

With two games in three days coming up for No. 9 Iowa State, the fight for first place in the Big 12 will become as hectic as any conference in college basketball.

Although the Red Raiders are tied for second to last in the conference and are well out of any NCAA Tournament discussions, a few of the wins they have are quite impressive.

“All I have to do is tell our team ‘they beat Texas at Texas’ and that gets their attention, because we obviously haven’t played very well against Texas,” Iowa State Head Coach Bill Fennelly said.

Texas Tech has also blown out Kansas State when the Wildcats were in the top-25 and beat a ranked Oklahoma squad on the road. On top of that, the team suffered close losses to Baylor, Kansas, Oklahoma State and TCU.

This essentially pegs Texas Tech as the stereotypical ‘team that’s better than their record’ that the Cyclones don’t want to get caught slacking against.

That wasn’t the case in the first go-around in Lubbock, as Iowa State came out on top 86-65.

Beatriz Jordão scored 11 points and grabbed eight rebounds in the first meeting, and the Cyclones will need a solid performance from her once again.

With Morgan Kane recovering from a bad case of the flu that forced her to miss Wednesday’s game against Kansas, Jordão is expected to start again while Kane should be able to see minutes off of the bench.

Both see similar playing time and help bring different abilities to the five spot, so switching who starts and who comes off the bench won’t change how the two go about their business.

“We support each other a lot,” Jordão said. “We know that she can give some stuff to the game that I cannot give, and I do other things that she doesn’t do. We complement each other really well.”

Defensively, Lexi Donarski will have to be up for yet another challenge when Texas Tech guard Vivian Gray comes to town.

Averaging just over 21 points-per-game, Gray scored 17 points on 18 shots in the first meeting between the two sides.

With strong performances against names like Caitlin Clark, Taylor Robertson, Holly Kersgieter and the aforementioned Gray, Donarski has been inspiring her teammates to step their games up on the defensive side of things as well.

“Like Coach Fennelly always says, ‘it takes two skills to be a good defender’,” Emily Ryan said. “You have to be willing and you have to be able. Lex is very capable and she’s working really hard. Seeing how hard she works makes everyone else wanna work hard just so that we don’t let her down because she has to work really hard every game on their best player.”

With Saturday’s matchup being Iowa State’s “Play4Kay” game this season, there will be stark reminders of something that is much bigger than basketball.

He also hopes that it isn’t just treated like a one-game event that is eventually forgotten.

“It’s a great thing, but I really wish that when the pink uniforms go away that people still talk about it,” Fennelly said.

Tip-off will take place at 1 p.m. at Hiton Coliseum on Saturday. The game can also be streamed on Big 12 Now on ESPN+.