Impact of Ryan, Diew helps propel No. 11 Cyclones to sweep of Oklahoma State 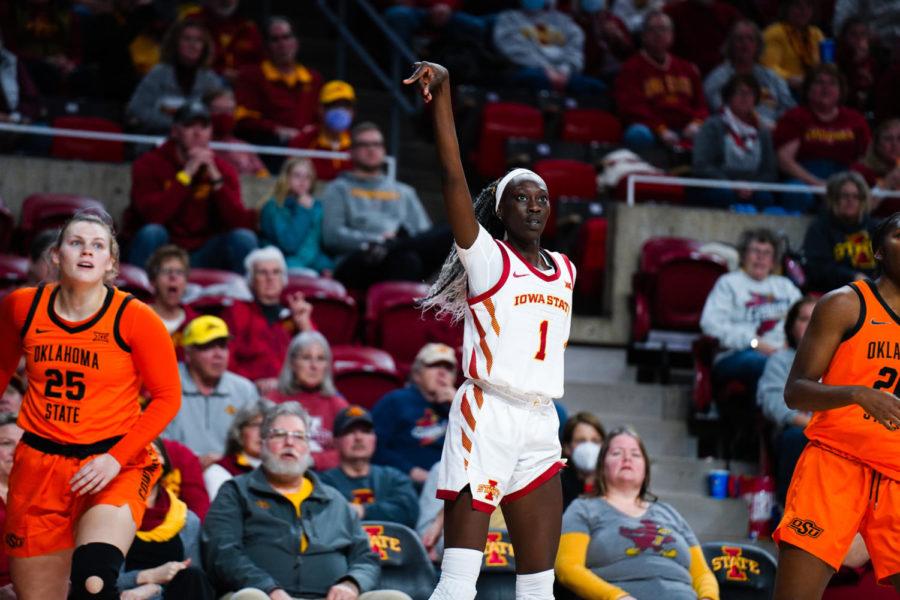 It was another season-sweep for the No. 11 Cyclones on Saturday night, as they took care of business against Oklahoma State by a score of 76-58.

Building up another big first quarter lead against the Cowgirls (24-8 in the first meeting, 28-13 on Saturday), the team was able to coast through most of the remaining three quarters.

Two players, however, really stuck out.

Starting with the player whose impact was obvious when looking at the stat sheet, sophomore guard Emily Ryan continued her great run of point-guard play for the Cyclones this season.

The show she put on was acknowledged by Oklahoma State Head Coach Jim Littell, who stated that Ryan might be the most improved player in the Big 12.

“You can tell she’s a kid that lives in the gym,” Littell said. “I’d bet that she’s probably in here every day working on her game, and she’s gotten better on the perimeter. Where she’s really good is, I call it explore dribble, she backs you down in the lane and looks around, and if you leave her, she finds somebody and sets them up.”

Iowa State Head Coach Bill Fennelly agreed that Ryan should be on the list of most improved players in the conference. He talked about her basketball IQ and tenacious defense as key factors in the player she’s grown into her, saying that she is “always in the right spot.” Her adjustment in her second year to the physicality of college basketball was noted, as well.

He also credited all of the things she’s done off of the court as a reason for her tremendous growth.

“The kid loves to play,” Fennelly said. “And everyone always says: ‘doesn’t everyone?’ No. They love to play; they don’t love to do the work to play. This kid loves to do everything. Everything about basketball she loves. The work, the drudgery, the weightlifting, the stretching. Whatever it is, the kid just loves everything about it, and she’s bringing it and bringing her team with her.”

Ryan agreed with her coach on her adjustment to the style of play and physicality of the college game, as well as Big 12 play overall.

But she mostly deflected the praise that was thrown her way to her teammates, crediting them for their help in making her performance possible.

“Once the first one goes in you’re always feeling a little better about your shot, but honestly it was just my teammates giving me good looks,” Ryan said. “They drive the lanes really well and they were creating a lot of open shots for everyone, so credit to them. It’s fun when it’s going in.”

The player whose impact isn’t as plain to see on the stat sheet was Nyamer Diew.

Diew’s growth into her role has been dramatic over the past few games. On a surface level, she only had four points and five rebounds in Saturday’s matchup.

But when it came to hustle and heart, she was unmatched.

“[Nyamer] has been really solid for us,” Lexi Donarski said. “She’s coming off of two really strong games, and she brought it again tonight. She just has a lot to offer for this team, and she’s willing to do what she has to for us to win. She really embraces her role, and she’s been great for us lately.”

That role was made even more important against Oklahoma State when Ashley Joens picked up her third foul with over four minutes left in the second quarter. Although Diew isn’t expected to pick up the scoring load that is missing with Joens off the floor, she did plenty of other things to fill the gap.

Before halftime she fell into one of the baseline media tables hustling after a loose ball. She fought for rebounds and played tough defense on whoever her assignment was. She ran after another loose ball later in the game and managed to throw it off an opposing player before it went out of bounds. She even took her defender off the dribble and made a tough layup that gained some extra appreciation from the home crowd.

Fennelly said a big part of Diew’s importance to the team is her versatility. She’s been a true position-less player for the Cyclones, and it was on full display on Saturday.

“We can play her about anywhere on the court,” Fennelly said. “She’s long, she’s athletic. Her basketball IQ is very high. And I think she has a comfort level now with her teammates. It’s taken a while. I mean, it’s hard to transfer in and not know what your role is, but she’s a great kid. [She’s] been a great, great addition, not just to our team, but to our university. We had no problem putting her in the game, and I think the last three games she’s been over 20 minutes. That says that we trust her.”

Still tied atop the Big 12 with Oklahoma, several rival head coaches have talked about how Iowa State can definitely win the conference. Littell mentioned it once again after Saturday’s game.

For now, though, the team can’t afford to look too far in the future. It’s been a talking point all season that the focus is always on the next 40 minutes. With a week off following Saturday’s game, though, it’s about appreciating where they’re at now and the work they’ve put in to get to this point.

“I think today was practice number 96, and I can honestly say there’s been three that I was not really in a very good mood when it was over,” Fennelly said. “They’re showing up, they’re doing the right thing, they care about one another [and] they’re very connected. I mean who knows where it goes from here, but we’re gonna celebrate where we are today because they’ve earned that right.”