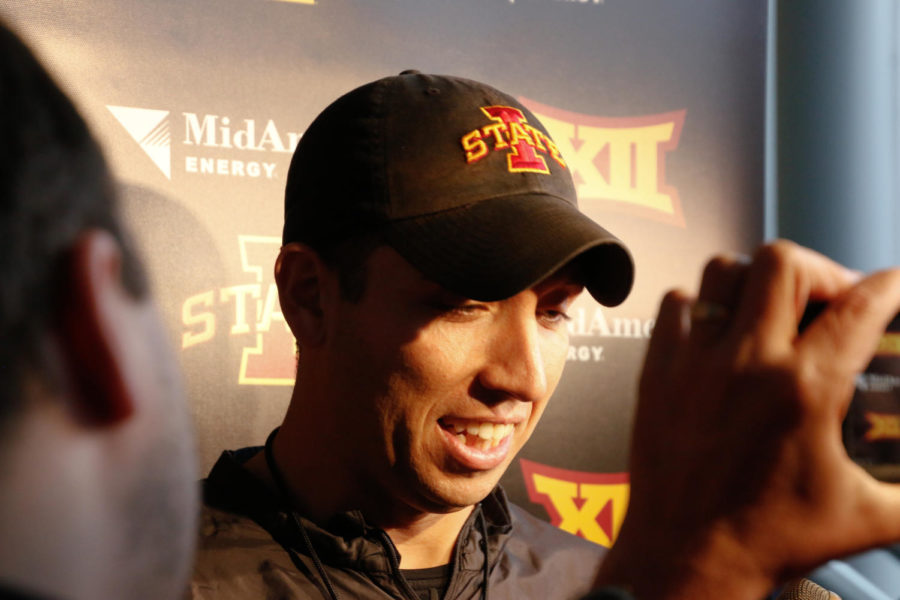 Matt Campbell talks to the media following the announcement of the Cyclones playing in the AutoZone Liberty Bowl on Saturday, December 30. The Cyclones will travel to Memphis, Tennessee to face the Memphis Tigers.

The Associated Press released its 2017 All-Big 12 Team on Friday, with accolades being presented to a handful of Iowa State players and head coach Matt Campbell.

Along with Campbell, some of the Iowa State players made the list for All-Big 12 First and Second Team.

Montgomery was one of the most dominant running backs in the Big 12 and also ranks in the top 35 of the NCAA for total rushing yards. He has 1,094 rushing yards this season along with 11 touchdowns.

Lanning made the switch from quarterback to linebacker after last season. He leads Iowa State with 110 tackles and tied with JaQuan Bailey for team sacks this season with five. Lanning was a finalist for the Paul Hornung Award.

Cotton-Moya has been through his share of injuries throughout his Iowa State career, but his last Cyclone season ended on a strong note. He had 60 tackles on the season with three interceptions.

Lazard has broke many school records this season and will be eyeing a spot on a NFL roster this upcoming spring. He ended his final season with nine touchdowns and 799 receiving yards.

Campos had to sit out the entire 2016 season due to a leg injury, but his final season ended with him playing every game this season and giving the offensive line some needed leadership.

Peavy was the top cornerback for Iowa State this season and did his part on the defensive end. He had 81 tackles, six tackles for loss, two fumble recoveries and one interception.