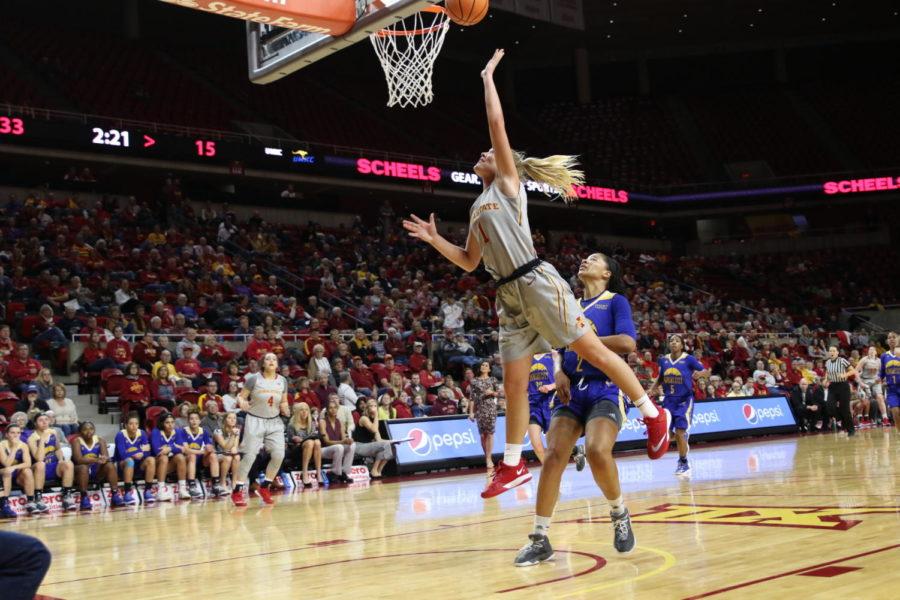 Iowa State freshman Madison Wise lays the ball in late in the first half against UMKC.

In 23 years at the helm of the Iowa State women’s basketball program, coach Bill Fennelly has only had a losing record twice against the Cyclones’ in-state rivals, and just once did his team go 0-3.

It hasn’t happened in 14 years, unless Iowa (8-1, 0-0 Big Ten) finds a way to knock off the Cyclones on Wednesday night in the annual Cy-Hawk Series. Iowa can accomplish this feat after the Cyclones squandered close games against Drake and Northern Iowa.

However, Megan Gustafson and the Hawkeyes present a greater challenge than either the Panthers or Bulldogs presented earlier this season. Iowa possesses much greater talent than both and they certainly have a better record than Northern Iowa, Drake and even Iowa State. The Hawkeyes’ lone loss came from the hands of No. 13 Florida State by one point, a game in which Iowa led for a large portion.

“[Gustafson] is a great player,” Fennelly said. “Her numbers are borderline video game-like… you’re not gonna stop her from scoring, no one can do that.”

But to Iowa State’s advantage, the Cyclones hold a 5-0 record in the last five Cy-Hawk games played at Hilton Coliseum, the site for this year’s battle. And so far this year, Iowa State is perfect at home.

“If you look at the history of our programs, we’ve kind of been both pretty good and then when you play at home there is a built in advantage,” Fennelly said. “I do think when the games are evenly matched. There’s a little extra juice in the home locker-room of we can’t be the team that loses a home game… this is the first time in a long time where the visiting team is a lot better than the home team.”

With its most recent road loss, Iowa State should certainly be happy to be coming home. On Saturday afternoon, the Cyclones dropped their fourth game of the season against Vanderbilt 77-74, their fourth by four or fewer points.

They also shot a mere 25-for-60, highlighted by a 10-for-21 performance from recently named Co-Big 12 Player of the Week, Bridget Carleton. The Chatham, Ontario, Canada native dropped 30 points to go along with eight rebounds.

Despite going 0-2 in the week prior to the Iowa game, the Cyclones might have finally found Carleton’s sidekick – senior guard Emily Durr. Durr exploded for a team-high 21 points against Drake and contributed a less than eye-popping four points in Nashville, Tennessee.

If the Cyclones want to keep up with the 87.2 points per game the Hawkeyes average, then it will have to be more than just Durr who steps up.

A potential answer is freshman Madison Wise. The Indiana native was named Big 12 Freshman of the Week after posting eight points against Drake, and 14 against Vanderbilt. That’s promising considering Wise has been rather inconsistent this season for the Cyclones.

“We have a dynamic player in Bridget [Carleton] and we’re looking for someone to help,” Fennelly said. “When we’ve been decent it’s been two or three people contributing, when we haven’t, they stand around and watch Bridget [Carleton] play.”

On paper, the Cyclones seem doomed against the Hawkeyes, but Hilton Magic has provided those five wins and in a rivalry game of this magnitude, records and statistics mean absolutely nothing.

“We are very, very, very excited to come back [Wednesday] and play in Hilton,” said junior Meredith Burkhall. “We know that Hilton Magic is real.”