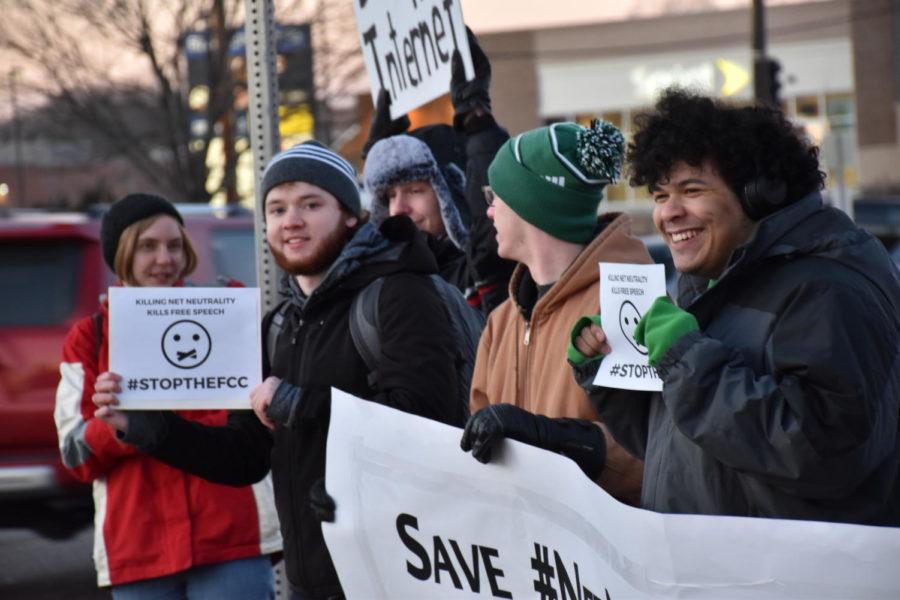 Thursday evening, Chris Judge (second from left) and others gathered outside the Verizon Wireless store on Duff Avenue to protest upcoming net neutrality vote. Judge said he attended the protest because "people don't understand the importance of net neutrality and what it means for them."

“Pai Pai! You can’t hide! We can see your corporate side!”

16 people came together Thursday in protest of the Federal Communications Commission’s (FCC) attempt to repeal net neutrality rules. The event was organized by Grant Olsen, who registered the event on Battleforthenet.com and created a Facebook event to advertise it.

“We believe that the current net neutrality rules should be left in place,” Olsen said. “If the rules are repealed by the FCC, it’ll open up problems like paid prioritization.”

Olsen described paid prioritization as a ‘fast lane’. Internet service providers (ISPs) like Mediacom, Comcast and Verizon will have the power to charge users based on the connection speed they want. If someone wants fast internet—the fast lane— they will have to pay for access to it.

“Most people don’t have the disposable income to just pay for their Facebook to run quickly,” said Jacob Bolten, a junior majoring in design.

The vote to repeal net neutrality will happen Dec. 14. Olsen says this is why they are asking congress to intervene with the FCC’s attempt on repealing net neutrality established during Barack Obama’s presidency.

“There is also most importantly the issue of censorship,” Bolten said. “If net neutrality goes away, ISPs can block content they don’t agree with.”

Multiple protesters expressed concerns about potential censorship affecting what information consumers will have access to.

“I think free speech is a fundamental value of American life,” said Will Tinguely, a junior in computer science. “Censorship goes against that.”

Rico-Gomez is a junior at Gilbert High School and is the education chair of the Iowa State Democratic Socialists of America.

“[The removal of net neutrality] threatens our access to information and gives them the ability to potentially block sites they don’t like,” Rico-Gomez said.

Several residents of Ames also attended the protest, including Sally Passmore who cheered along with Iowa State students when cars honked as they passed by.

“I think a lot of people think this is a party issue,” Passmore said. “I think Democrats and Republicans alike need to come together to keep net neutrality. This isn’t a party issue, it’s an anti speech issue and its an anti trust issue.”

The protesters left the storefront of Verizon wireless at 5:30 p.m., continuing to hold their banners all the way to their cars. Verizon stores across the country have been targeted by protesters in over 500 cities nationwide as reported by BGR.

The Daily reached out to Verizon employees inside the store for a comment, who directed the Daily to Verizon’s public statement below and more information, which can be found here.

“We believe consumers should be able to use the internet access lawful content of their choice when, where, and how they want.

At Verizon, we invest $17 billion every year so that consumers can continue to consume more of the Internet content they want. Our advanced broadband networks and services provide strong platforms for innovation for consumers  and for other providers and users throughout the Internet.

For decades before 2015, the internet developed in a lightly regulated  environment that addressed any problems that arose but avoided unnecessary regulation. We think that’s still the best way forward.

Our customers can use the legal content, applications, and the services of their choice, regardless of source, over any of our Internet access services.”