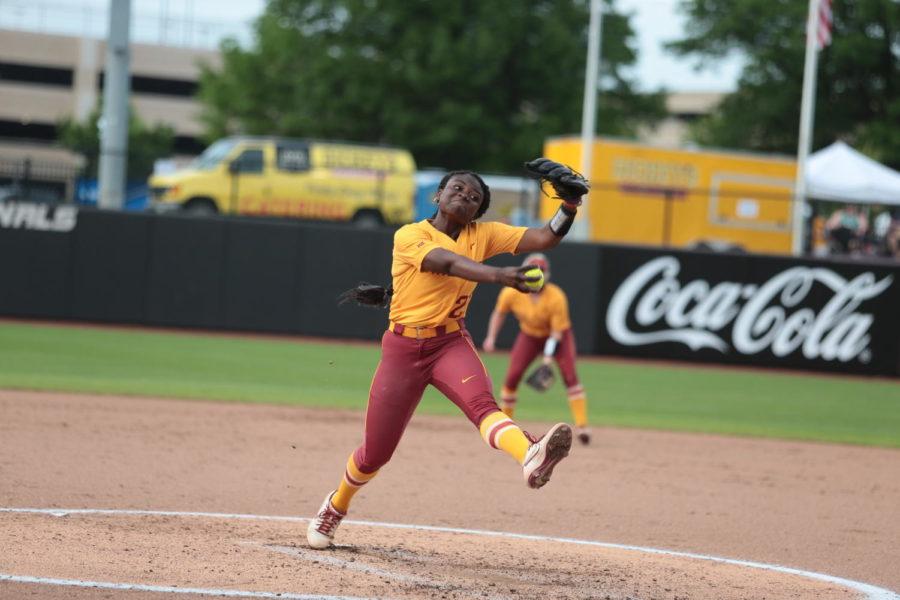 Saya Swain winds up to throw a pitch against the University of Northern Iowa in Game 2 of the NCAA Columbia Regional on May 22. (Photo courtesy of Iowa State Athletic Communications)

Iowa State softball took down Quinnipiac and Howard on Sunday each by more than eight runs as part of the team’s unexpected road trip.

Iowa State beat Quinnipiac 14-1 and topped Howard 10-2, moving the Cyclones to 6-1 on the season.

Against Quinnipiac, the Cyclones wasted no time getting started with four runs in the top of the first inning. Clean-up hitter Milaysia Ochoa launched a three-run blast in her first at-bat of the day.

Coupled with an RBI single from Angelia Allen, the score was 4-0 after one-half inning.

In the bottom of the first, starting pitcher Karli Charles struck out the side. Charles pitched five innings against Quinnipiac and gave up just two hits and one walk. Quinnipiac could not score a run against Charles until the fifth inning. Charles recorded six strikeouts and picked up her second win of the season.

In relief of Charles, senior Shannon Mortimer got her first pitching appearance of the season. In one inning in the circle, Mortimer struck out one to close out the first game of the day.

In the top of the second, Mikayla Ramos made the game 6-0 with another home run off Quinnipiac’s starting pitcher Zali Adams. Adams left the game after two innings pitched.

Iowa State held the lead the entire game against Quinnipiac. A flurry of slugging in the bottom of the sixth sent the Cyclones up by 13. Ochoa doubled and Kasey Simpson tripled for two RBI each while the Cyclones scored six in all during the top of the sixth.

The win against Quinnipiac is the largest margin of victory for Iowa State so far in 2022.

After planning on attending the Troy Cox Invitational in Las Cruces, N.M., the team pulled out of the tournament due to travel complications. Friday evening the team added two double headers in Washington D.C..

Howard would get the scoring started with a solo home run in the first. However, the Howard lead did last long. Ramos gave the Cyclones the lead with her second home run of the day in the third inning after an Alecia Ranches sacrifice fly tied the game.

The shortstop Ranches moved up a spot in the order Sunday. After batting seventh at the UNI-Dome tournament, Ranches batted sixth in both games Sunday. Ranches had two home runs and eight RBI at the UNI-Dome.

Iowa State did not surrender the lead after the Ramos homer.

Again, some slugging from Cyclone hitters broke open the game. A Kasey Simpson home run in the top of the fourth put the Cyclones up by five. Then in the fifth, Kaylee Pond drove her second triple of the day.

Iowa State had nine extra base hits against Howard, including two home runs and five double.

On Sunday, sophomore pitcher Saya Swain continued her early season dominance with another gem in the circle.

Swain comes off a record breaking performance against Northern Iowa in which she struck out 17 batters.

Swain got the start against Howard and in just four innings in the circle, Swain struck out seven batters. Swain gave up six hits and did not walk a batter as she moved her season record to 3-0.

Elli Spelhaug relieved Swain in the fifth and recorded two strikeouts without allowing a run.

Iowa State will rematch Howard at 9 a.m. and finish its trip at 11 a.m. Monday against Coppin State.