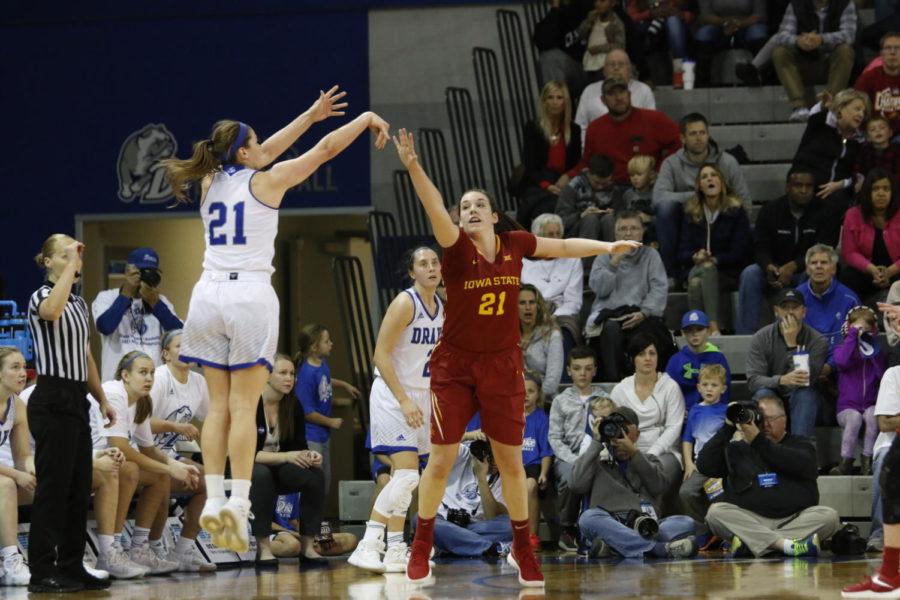 Heartbreaking losses have become a trend for the Cyclones.

Iowa State’s women’s basketball team lost its third straight game on Saturday in a thriller, falling to now-3-6 Vanderbilt 77-74 in Nashville. The Cyclones led 38-33 at halftime and were close throughout, led by a 30-point performance from junior guard Bridget Carleton. The loss drops Iowa State to 3-4 heading into the Cy-Hawk game on Wednesday.

Here are three things that stuck out from Saturday’s game.

The Cyclones have not been a great 3-point shooting team this season. Before Saturday’s game, they were hitting 36.4 percent of their long-range efforts, which ranked them 66th in the country. Saturday, though, the Cyclones were white-hot from three. The Cyclones hit 10 3-pointers in a single game for the third time this season and used the outside shot to keep them in the game.

Only three Cyclones actually made 3-pointers during the game. Bridget Carleton hit four, freshman guard Madison Wise had three and sophomore forward Adriana Camber had three as well. Iowa State will need to hope their strong shooting continues, especially with a difficult matchup against Iowa coming up on Wednesday.

The Cyclones have relied almost exclusively on perimeter production this season, and Saturday’s game did nothing to suggest that will change before conference play.

While Saturday’s game ended in a third straight defeat, Iowa State has lost three of their four games by four points or less. The Cyclones let a five-point halftime lead slip in this one, but this team continues to drag itself back into games in the fourth. The Cyclones are incredibly young, with freshmen seeing the floor for 55 total minutes on Saturday.

The freshmen and transfers are taking time to gel, as is natural with a team boasting four newcomers and only one true senior in Emily Durr. It’s likely that the Cyclones will not hit their peak until the conference season, but for all of their offensive and defensive struggles so far, the fight the Cyclones have shown will no doubt please coach Bill Fennelly.

It’s been no secret that Bridget Carleton is Iowa State’s best player. The junior has been a member of the Canadian national team, was voted Unanimous First Team All-Big 12 last season, and is on the preseason watch list for the Cheryl Miller Award.

Saturday, though, was her best performance of the young season.

Carleton had 30 points against the Commodores, hitting 4-of-6 3-point attempts and shooting 10-for-21 from the field. She continued to stuff the stat sheet, adding eight rebounds and three assists. Despite finding herself in foul trouble for the second straight contest, she was once again the best offensive option for the Cyclones.

Despite two other Cyclones scoring in double figures, though, Iowa State is still looking for a consistent second option to take some of the load off of Carleton.

Emily Durr, the team’s leading scorer in Thursday’s loss to Drake, was held to four points on Saturday. The three main post players for the Cyclones scored 15 points between them. It looks as though Adriana Camber may be ready for more responsibilities, with her 11-point effort on Saturday being the second straight game she’s hit double figures. Madison Wise chipped in 14, and shot 5-of-7 from the field.

Saturday’s game showed that there are players who can, on their day, provide that second option. But, as Fennelly as often stressed, the Cyclones need a player to step up consistently for this season to be successful.

Seven games in, and the search is still ongoing.