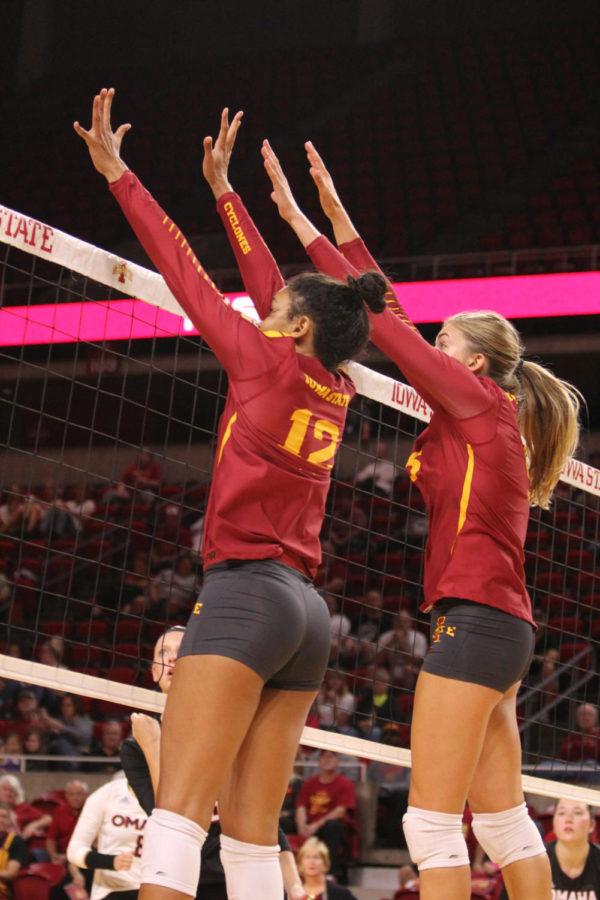 Seniors Genesis Miranda and Alexis Conaway go up for a block Aug. 26. The Cyclones went on to sweep Omaha in thee consecutive sets.

Twenty-six matches have come and gone for Iowa State this season. Match No. 27 on Saturday, marks the final regular season match for the Cyclones this season.

For many players on the court, Saturday’s match against Texas Tech will be used as a tune-up before pursuing a championship. For Monique Harris, Alexis Conaway, Samara West and Genesis Miranda, it could be their final match inside Hilton Coliseum.

“It doesn’t really feel like [Saturday] is it,” Harris said. “We’re playing so well right now, so the tournament is definitely an option. [I’m] just trying to take this week and take it in and just be grateful for everything that I’ve done in my career.”

The four seniors are almost always on the court for the Cyclones, having played in about 96 percent of Iowa State’s total sets.

During that time on the court, the seniors helped lead Iowa State to its first 20-win season since 2012, but it was a windy road for the seniors to get to this point.

“They’ve all had to change their roles,” said coach Christy Johnson-Lynch. “[Alexis Conaway] has to move from middle to outside. Genesis [Miranda] changed her role over the past year. [Monique] Harris goes from not starting, to 6-1 to 5-1 to 6-2, back and forth. Samara [West] gets benched as a junior, and then changes to a right side.”

With junior hitter Jess Schaben receiving a bulk of the attack attempts, Conaway and West compliment Schaben with their efficiency.

In Iowa State’s record book, the two names can be found at the top for highest career hitting percentage. Conaway is No. 1 with .331 and West sits at No. 3 with .306.

The duo had one of the most historic single seasons to go along with the career records. In 2015, West hit at a clip of .352 and Conaway hit .351, ranking them No. 1 and No. 2 all-time in Iowa State history.

“We’ve had some big wins, those have been really exciting, beating ranked teams,” Conaway said. “Going to Hawaii was awesome, but even just the bus rides or the trips where random things happen, I’ll remember all the little things in between.”

The setter providing Conaway and West the opportunities for kills the past few seasons has been senior Monique Harris.

Harris currently ranks sixth in assists in Iowa State’s all-time record book. The Clinton, Iowa native led the Cyclones in assists her sophomore and junior seasons, and it’s safe to she’ll end up with the most assists this season.

Not only has Harris been a factor setting up Iowa State’s weapons, but the senior also does damage behind the service line.

Harris led the Cyclones in 2015 and 2016 with a combined service ace total of 52. This season Harris is tied for first with 19 aces.

The final senior is Puerto Rico native, Genesis Miranda. Johnson-Lynch has leaned on Miranda as a reliable server. Miranda has chipped in 16 service aces in her senior season.

“The word that comes to mind when I think of [the senior class] as a group is selfless,” Johnson-Lynch said. “Just a lot of team-type people. With this class [I] really spent no time ever talking with any of them about being a good teammate, or sacrificing. They all just get it.”