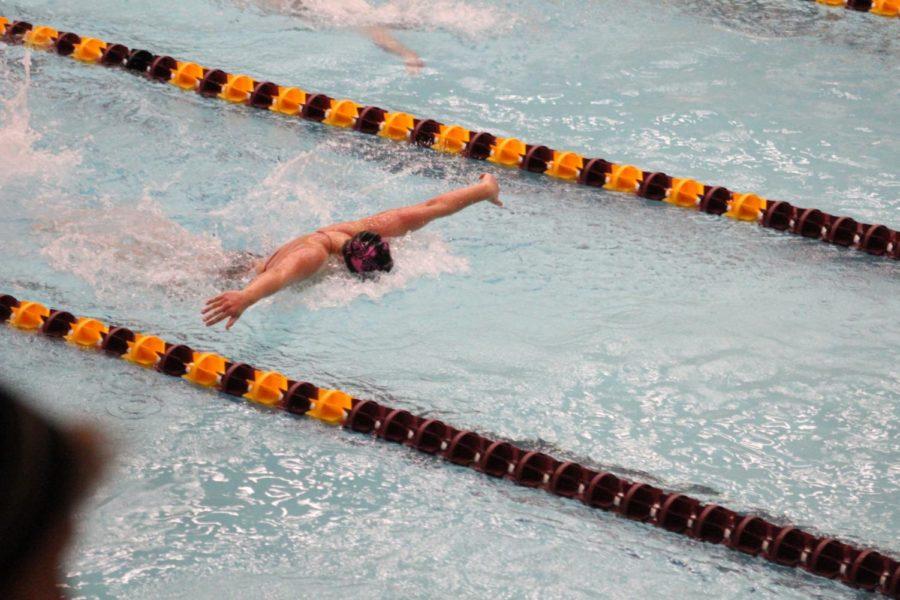 Freshman Kennedy Tranel competes in a heat of the butterfly stroke in the Beyer Hall pool on Oct. 27.

After beating Nebraska-Omaha two weekends ago, members of the Iowa State swimming and diving team are going to face the challenges of two teams on Friday: TCU and South Dakota.

Friday’s meet is different compared to former meets. Three teams are competing in one pool, including the men’s swimming teams for both TCU and South Dakota.

“It’s going to be a little different. One noticeable difference is swimming and diving will be happening at the same time,” said diving coach Jeff Warrick. “That makes a little chaos for the athletes too.”

In the last meet, the diving team competed against Omaha with large advantages. Transfer Dana Liva and redshirt junior Sydney Ronald all performed better than their first meet at Nebraska. Liva also developed her score in the three-meter springboard.

After their success, Warrick demands more for his divers.

“I think both Dana and Sydney are going to be kind of neck and neck,” Warrick said.

After the double dual meet on Friday, the diving team will take part in an invitational competition in Minnesota on Saturday. In addition to Katherine Mueller, who competed in this event last year, Liva and Ronald will also take part in both springboard events.

Warrick believed it would be a good opportunity for divers to meet with more athletes from different teams and develop their ability in big competitions.

The competition between the Cyclones and Horned Frogs seems fiercer than other races. Last year, these two teams ended tied at 150 points apiece in Fort Worth, Texas.

The Horned Frogs have already faced a Big 12 team in Kansas, losing to the Jayhawks 188-110. In their other meet of the year, TCU defeated Texas-Permian Basin.

“Look at TCU’s [swimming] times and our times, it is very compatible. So it should be a very competitive meet,” said head coach Duane Sorenson. “South Dakota has some really outstanding swimmers too.”

Still, the Cyclones have advantages in several races.

Sophomore Keely Soellner, who won the 1000-meter freestyle last year, looks forward to her next performance in distance freestyles. Senior Laura Miksch is consistent in the 100-meter freestyle. Senior Silqi Luo returns for the Cyclones and has the opportunity to win the 200-meter free, 100-meter butterfly and 200-meter individual medley.

Sorenson thinks it will be an interesting meet and every swimmer has the opportunity to compete for a good finish.

“Laura is still in 50-meter free but Mary Kate [Luddy] will compete in different races [than last year],” Sorenson said. “She can score the most points for the team.”