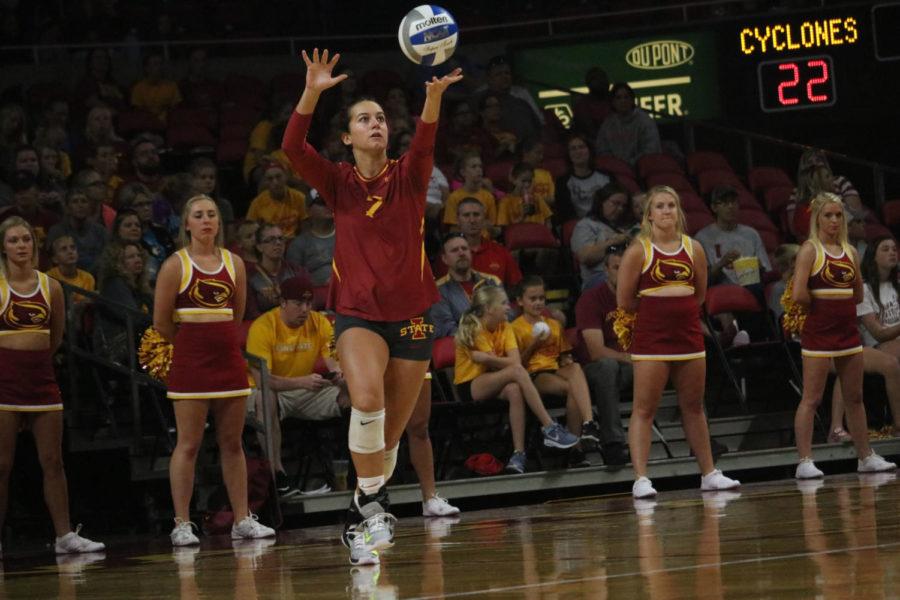 Freshman Izzy Enna serves agains the Mavericks during the first set of the game. Iowa State went on to beat Omaha 3-0.

With the regular season wrapped up, Iowa State volleyball has its eyes on postseason play. Postseason action ramps up the intensity in any sport, and volleyball is no different.

One of the most important facets of the game is serving. Obviously, if a team can steal a point off a service ace, it’s a big play. On the flip side, a serve that sails long or gets swallowed by the net is a deflating play for the serving team.

Not only are service aces and errors important to a volleyball match, but quality serves that don’t result in aces are just as important.

The goal of a serve isn’t always to snag an ace, but it’s important to get the receiving team out of system, giving the serving team a head start.

The Cyclones began the season with a leak in their serving department. In the first 10 non-conference matches, Iowa State only managed 31 aces with 57 errors. In the last 10 matches, the Cyclones have upped those numbers with 60 aces and 91 errors.

The increase in serving numbers probably is a result of the Cyclones being more aggressive behind the service line. Before the Texas match, coach Christy Johnson-Lynch talked about the need to take more serving risks against talented teams to give Iowa State an edge.

An aggressive philosophy can increase service numbers, but Iowa State also needed players to convert the higher-risk serves. In the last 10 matches, the serving catalyst has been freshman defensive specialist Izzy Enna.

“[Izzy Enna has] a great serve,” Johnson-Lynch said. “It’s a bullet. It goes over the tape, always pretty low. If you want to serve tough, there’s a couple ways to do that and one of them is serving very low trajectory and she does that.”

Enna has been a game-changer for Johnson-Lynch and the Cyclones behind the service line. She currently has a team-high of 22 aces with 17 of those coming in the last 10 matches.

Not only has Enna been effective with her serving, she’s also been efficient. Along with the 17 aces, Enna has minimized the service errors with only eight.

Enna has built confidence in her serving, but her teammates have gained trust with her on the court.

“[Izzy Enna is] very experienced,” said redshirt sophomore libero Hali Hillegas. “I think letting her know I trust her back there with me when she does play, I think that helps her a lot [and] boosts her confidence.”

Enna placed herself at the top of Iowa State’s serving statistics, but the freshman has established herself as one of the top servers in the Big 12.

In conference matches, Enna has 17 aces, ranking her second in the Big 12 behind West Virginia’s Payton Caffrey and her 29 aces. It’s worth noting that out of the top 10 servers in the Big 12, Enna has played the fewest amount of sets.

Enna closed her regular season out with a statement. In Iowa State’s final road match, Enna had a career-high four aces in only three sets. Enna is the only Big 12 player this season to have four aces in a sweep.

Enna’s serving has been on fire lately, but the freshman had a cold streak to begin her collegiate career. The Cyclones began the 2017 season with 10 non-conference matches.

She saw action in a majority of those matches, playing in 32 of the 37 sets, but chipped in just two aces paired with eight service errors.

“[Her serve is] what got her on the court,” Johnson-Lynch said. “She’s a great player, but her serve is pretty elite.”

Enna’s strong serving has been changed throughout the course of her freshman season.

Her serving struggled at the start of the season, so what’s been the key to the turnaround? Her approach.

“Just getting that serve to float to where it just drops,” Enna said. “I think that’s the only key is not to hit it as hard as I can and just float it.”

Enna began the season picking up playing time where she could find it. A couple months later, her serving is a luxury the Cyclones need in order to make a deep postseason run.