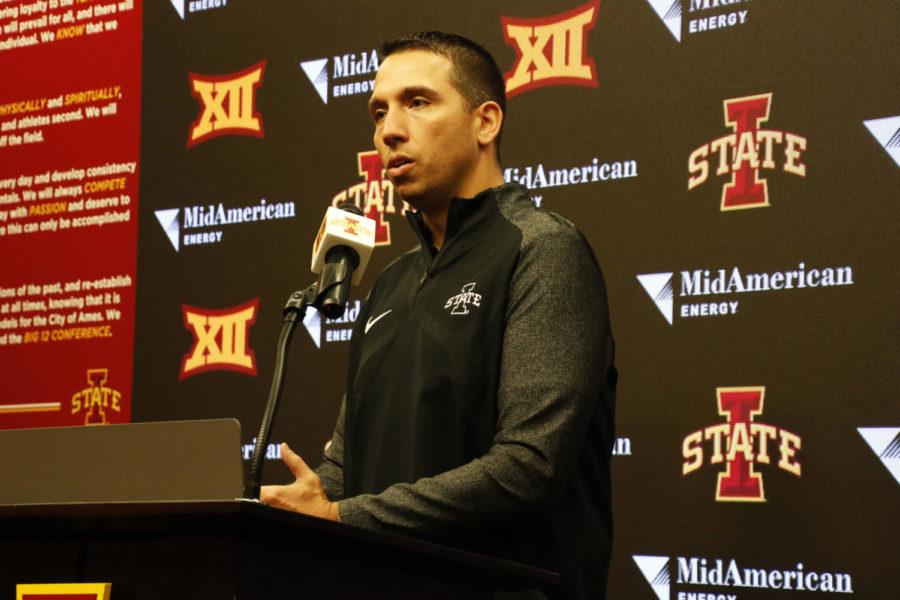 Just hours prior to taking a trip to the town roughly two hours southwest of Ames, Campbell had inked a new six-year contract worth $22.5 million. And it was only fitting that Campbell celebrated his new contract by visiting a recruit, not by having a lavish dinner.

“I think it’s really great to get behind [the contract talk],” Campbell said. “You really don’t focus on that when there’s football games going on, the recruiting part you do, but what was going on around us and you know it’s just this time of year [recruiting] picks up.”

If Campbell’s recruits were the nails, then his new contract was the hammer. With Campbell taking the Cyclones from 3-9 a year ago, to 7-5 this season, speculation swirled around the college coaching carousel that the Ohio native was a hot commodity around college football and could potentially wind up elsewhere.

The former Toledo coach went on to say that the coaching profession is crazy. Campbell said that he’s not a big fan of the craziness that goes on, but a big fan of being around his players and coaching football.

But with the new contract, Campbell is here to stay, which should be a relief for many of the recruits possibly having second guesses about calling Iowa State home. Campbell understood that for these 17, 18 and 19-year-olds, that their college decision is often one of the hardest decisions in a young man’s life and he hoped this contract would lighten the burden.

“They begin to have those questions,” Campbell said. “I think to be able to put a stamp on stability of this is what we are doing, we are who we say we are and this is where we’re going in this football program and being able to put some validity to that I think was really big.”

In a world of young coaches jumping from job to job, it is only right for the recruits to have questions about Campbell’s commitment to Ames. And Campbell said that recruits who were asking the question of what will you do and where will you be, until you put validity to it, they have every right to do so.

“Everybody’s asking that question,” Campbell said. “I don’t think an 18-year-old, 19-year-old kid today in recruiting [can answer], who do you trust, what do you trust?

Along with the contract, Iowa State athletic director Jamie Pollard also hinted at a $75 million project towards Iowa State’s football facilities. While the contract offers stability, the potential project will only help draw in even more recruits.

There has yet to be a formal announcement on what the project will include, but Campbell made mention of it specifically benefitting the players.

“Things like full functioning training tables, I think the ability to a players lounge creating an environment for our players,” Campbell said of some of the plans. “One thing that I think is really important is you want your players here in the facility as much as you can.”

The contract and facility enhancements are just the start of where Campbell wants to take the program and even added that this season could be called a fluke to some extent, which is only promising for Campbell and where the program can go once it fully comes together.

“I feel like my fire is raging more today than it was two years ago when I got here about where we can take this football program and what we can do here,” Campbell said. “There’s not been one day I’ve ever been disappointed that I came to Iowa State.”