Cyclones mount comeback to take down no. 25 Kansas State 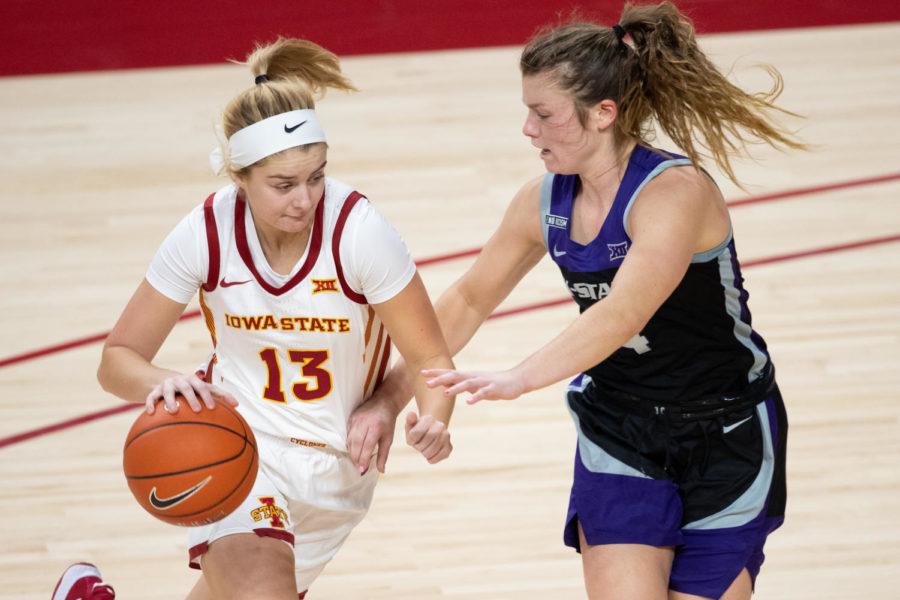 Iowa State sophomore guard Maggie Espenmiller-Mcgraw tries to score against Kansas State on Dec 18 in Hilton Coliseum. Espenmiller-McGraw made her 2020-21 season debut against the Wildcats with 14 points.

Sitting at 3-0 in the Big 12 and coming off a dominating win over TCU, the No. 9 Cyclones were down in Manhattan on Tuesday night for a matchup against the 25th ranked Kansas State Wildcats. The winner would take sole possession of first place in the conference.

After falling into a 10-3 hole early in the first quarter, Iowa State went on a 7-1 run that lowered their deficit to one. Following another quick burst from the Wildcats put them up by six, the Cyclones were able to hang around and end the first quarter down 18-15.

Much like the first quarter, Iowa State had no answer for Ayoka Lee. After scoring 14 points in the opening period, the junior poured in 10 more to match the entire Cyclone output and help put her squad up 35-24 at the half.

Morgan Kane and Beatriz Jordão each picked up two fouls in the first half, forcing freshman Izzi Zingaro into a tough spot against the experienced Lee.

Another factor in the deficit was Iowa State shooting only 30 percent from the floor compared to Kansas State’s 49 percent.

Early in the third quarter, Ashley Joens became the third player in program history to score 2,000 career points. That bucket was part of a 7-0 run that forced a Kansas State timeout and lowered the deficit to four.

Lee picked up her third foul late in the third, but the Cyclones were unable to take advantage of the time she spent on the bench and went into the final quarter down 54-47.

As if the game could get any wilder, Maggie Espenmiller-McGraw banked in a three with just over three seconds left to put the Cyclones up 72-70. This was the team’s first lead since being up 3-2 in the first quarter.

That shot would prove to be the game-winner, as a turnover by the Wildcats gave the ball back to Iowa State. Joens made one out of two free throws, and the Cyclones claimed a 73-70 win.

Despite 38 points and 11 rebounds by Lee, the Cyclones had a better all-around performance with four players scoring in double figures. Joens led the way with 27 points and eight rebounds. Lee was the only Wildcat to reach double figures.

Iowa State will have another road matchup on Saturday as the team will head to Stillwater, Okla., for a matchup against Oklahoma State.