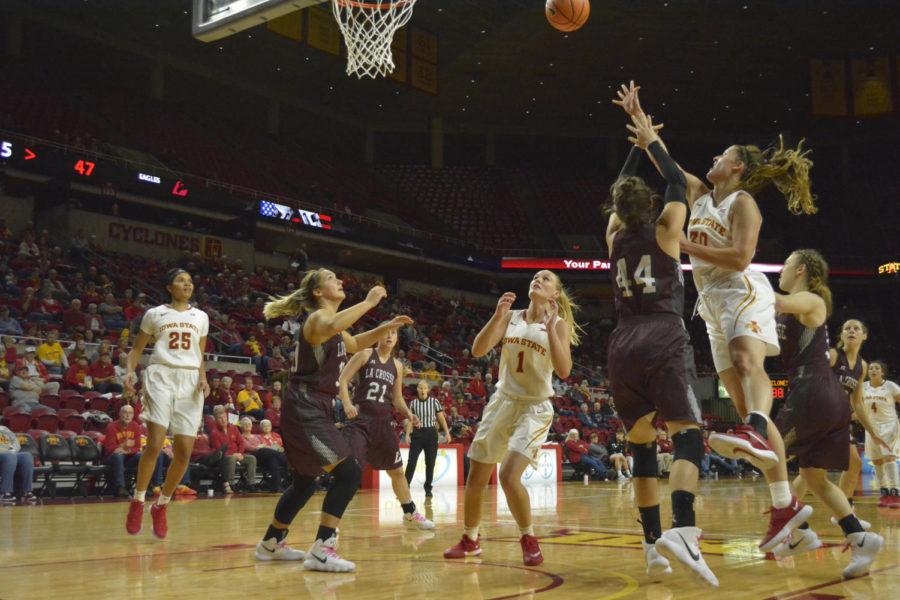 Claire Ricketts, forward, tries to score a basket for the Cyclones during the Iowa State versus Wisconsin-La Crosse game on Nov. 5. The Cyclones won 93-50.

Although it was just an exhibition game, the Iowa State women’s basketball team flexed its muscles against the University of Wisconsin-La Crosse Eagles on Sunday afternoon.

Despite the disparity between the two teams, both programs are able to take something away from a game that will not hinder either’s record.

“I just got done speaking to [UW-La Crosse] in their locker room and this has hopefully benefited both teams, which I think it did,” said Iowa State coach Bill Fennelly. “And just really like everyone else, [I’m] excited to get the season started and time to go.”

Going into the game, the big question Fennelly had no answer to was what the Cyclones’ starting lineup would look like. But the question was answered when Iowa State went with a veteran-heavy starting five, as four of the five starters were on the roster last year. Those four: Bridget Carleton, Emily Durr, Meredith Burkhall and Adriana Camber. The lone newcomer was Australia native Bride Kennedy-Hopoate.

The Eagles, a Division III school, were outmatched right off the bat, especially in the height category. The Eagles’ tallest players stood at just 6-foot-1, compared to the Cyclones’ four players that were 6-foot-3 or taller.

Another question mark for the Cyclones was the health of Durr, a senior guard who underwent Tommy John surgery after last season. However, Durr seemed like normal as she drained a three-pointer only 10 seconds into the game for the first points of the 2017-18 season.

From there, the Cyclones continued to spread around the ball and showcase the depth of their team very early in the game. Only seven minutes into the first quarter, Fennelly had already subbed in every player on the Cyclones roster.

“When we have a versatile group, obviously that just allows us more positions to score,” said freshman center Kristin Scott. “Just being able to put all 10 people in at the same time, like nobody will even get tired. We can always switch out and switch in.”

And to no surprise, the freshmen of Iowa State proved to the crowd at Hilton Coliseum why they are one of the top recruiting classes Fennelly has had since he arrived in Ames over 20 years ago.

Kennedy-Hopoate, a JUCO transfer, made quite possibly the biggest impact of the four newcomers. The biggest post player on the roster, she finished with 14 points and nine rebounds, one rebound shy of a double-double.

Scott, not to be outdone by Kennedy-Hopoate, reached that double-double mark with 10 points and 10 rebounds.

Kennedy-Hopoate, along with Burkhall, Scott and Claire Ricketts, had superior size over the Eagles and dominated the boards. The big four combined for 28 rebounds and four blocks.

“I think the blocked shots is a product of our length compared to theirs,” Fennelly said. “Obviously our size was bigger than La Crosse.”

And it wasn’t just those four that had made an impact defensively. Fennelly added that he thought the team did several things defensively that will be a crucial part of their game when the meat of their schedule arrives.

Most notably, the defense finished with 16 steals. In comparison, Lamar University, who led all of Division I last season in steals per game, averaged 14.2. Although Iowa State’s 16 steals was against a DIII school, it is still an incredible feat and something that Fennelly will rely on this season.

“What we talk about with our team is you don’t go for a steal, you get it because you’re in the right spot,” Fennelly said.

On top of the dominant play of Scott and Kennedy-Hopoate, the other two freshmen also showed up to play. Madison Wise and Rae Johnson each finished with nine points, while Wise led the team with 26 minutes played.

“I think every single kid could walk out of here thinking they did something positive,” Fennelly said. “We have one great player, and we have nine other people that need to figure out their roles and show up every day because you don’t know what number is going to be called.”