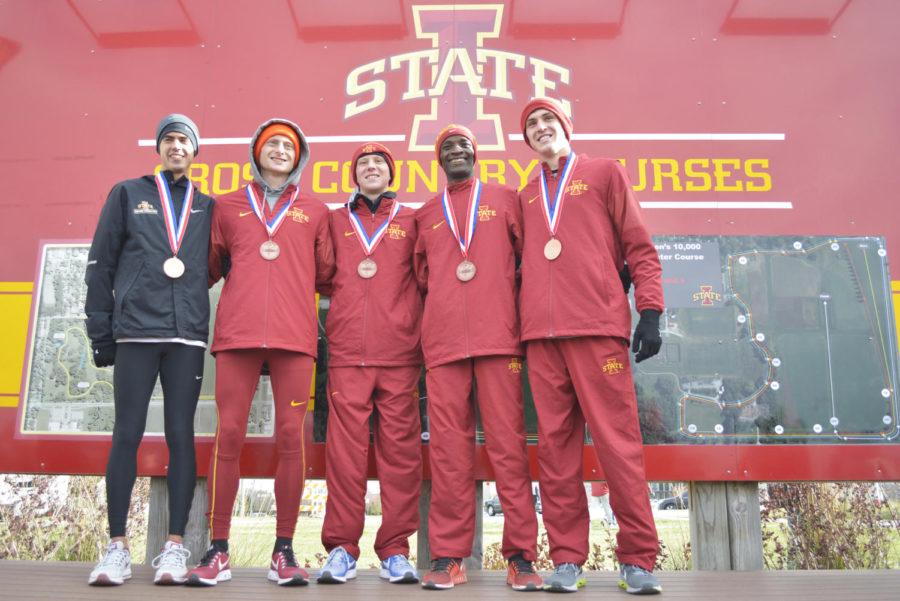 Home to the famous Kentucky Derby horse race, run every May at Churchill Downs racetrack.

Nicknamed “The Run for the Roses,” over 100,000 people flock to Louisville every year for the “greatest two minutes in sports.”

This week the Iowa State men’s cross country team will be traveling to Louisville for their own “run for the roses.”

The NCAA Cross Country National Championships that is.

And it lasts quite a bit longer than two minutes.

“There’s nothing else like it,” said men’s assistant coach Jeremy Sudbury. “It’s a different beast in itself.”

The fields consist of 31 qualified teams, whether that qualification came automatically or through the at-large point system. There are also 38 individual qualifiers for each field. These are runner’s who finished in the top-25 in their regions, but whose team did not qualify.

The Iowa State men are heading to Kentucky with positive momentum following team titles at the Big 12 Conference meet and the regional qualifier in the postseason.

Despite their post-season success, the Cyclones had an inconsistent regular season. Injuries, illness, and sub-par performances tested the young team’s abilities to adapt and work cohesively.

Now, heading into the national championships, their focus is just figuring the meet out and continuing to get better. Four of the seven varsity runners for the men have been to the “big dance” before, and the coaches are looking to the older guys to help the younger runners out as far as acclimating to the large team field, crowd, and overall environment.

Senior Nathan Rodriguez described the national meet as the next important meet for future seasons. He also discussed how the team had really been focusing on the conference and regional meets this season.

“Everyone can take a deep breath and refocus. Not take our foot off the gas, but just refocus,” Rodriguez said.

Rodriguez ran for the Cyclones at the regional meet in what was only his second race of the season. Out after the Hawkeye Early-Bird Invitational in early September, Rodriguez was dealing with a hip injury that turned out to be a small tear in his labrum, a ring of cartilage in the hip joint.

After considerable rehab work and the decision to postpone surgery, Rodriguez competed in the regional meet, finishing 20th overall, and coming in fourth for the Cyclones.

“Everybody’s in a good place,” Rodriguez said of the team looking ahead to nationals. “We want to come out with something we can build on in the future.”

Redshirt junior Dan Curts, who placed third overall at the regional qualifier and was Iowa State’s first finisher, also spoke on the upcoming trip to Louisville.

Curts described the team’s shift in mindset after a disappointing performance at the last regular season meet in Wisconsin on Oct. 13. Curts said the team had to figure out what they wanted to do with the rest of the season.

They must have decided.

“It is such a team sport,” Curts said of cross country. “A lot of people don’t understand that. We’ve been able to roll with the punches and had a lot of guys step up. Everyone feeds off each other.”

With all the lineup changes the team has seen throughout the season, Curts said the most important aspect moving forward is that everyone understands what needs to be done at the meet and when and how to do it.

“It was like a prelim,” Curts said of the regional qualifier. “Then you get to play the big game.”