Cyclones end road trip with a pair of blanks against Montana State, Providence 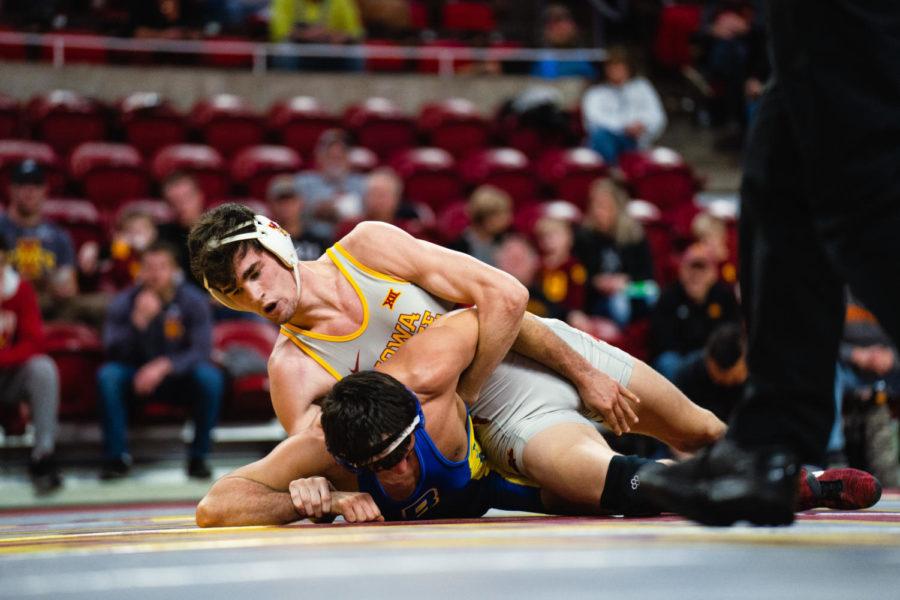 Redshirt senior Jarrett Degen wrestles against California State Bakersfield's Josh Brown in the Cyclones' 44-0 win over the Roadrunners on Jan. 12 in Hilton Coliseum.

Iowa State wrestling finished off its packed weekend with a triangular meet against NAIA programs Montana State University-Northern and Providence on Sunday. The No. 11 Cyclones improved their dual meet record to 8-1 after dominating across the board.

The man of the night No. 23 Jarrett Degen took the mat next against MSU-Northern’s Colin Silverthorn in the 149-pound weight class. Degen put on a strong performance at his old high school, recording a fall in just 2:35 to earn six more points for the Cyclones.

The falls didn’t stop there, as Andrew Huddleston fought hard in the 157-pound weight class to regain a lead late in the third period and pin MSU-Northern’s Connor Harris at the 6:28 mark.

Redshirt senior Austin Kraisser kept the points rolling for Iowa State with a 10-4 decision in the 165-pound weight class. The closest match of the night came at 174 pounds, as Carter Schmidt went to overtime against MSU-Northern’s NaKoda Siegel.

Schmidt’s lone escape in the second overtime period gave him the 2-1 (TB-1) decision.

Julien Broderson earned six more points for Iowa State at 184 pounds with a pin over MSU-Northern’s Carl Hansen in 4:26. No. 13 Yonger Bastida recorded the lone major decision of the dual in the 197-pound weight class (13-5). Sam Schuyler closed out the dual for Iowa State, recording the fastest fall of the night in just 55 seconds. With the final six points from Schuyler’s fall, the Cyclones completed their 49-0 shutout against MSU-Northern.

The momentum of the first match carried over in the dual against Providence. Fuessley took the mat first against Deven Altenburg-Lasher at 125 pounds, where he dominated from the beginning recording his second fall of the night in 2:25.

Cabanban followed up with a pin of his own against Joel Avila in the 133-pound weight class with a fall time of 2:53.

With the Cyclones leading 12-0, Klepps took the mat for the first time of the night against Caleb Birdwell. Klepps was able to keep up the pressure in the 141-pound weight class with a 7-2 decision thanks to a pair of early takedowns. Degen kept his incredible night rolling against Providence’s Gavin Gies in the 149-pound weight class.

With the crowd cheering him on in his old high school, Degen pinned his opponent in 6:28 to earn six more points for the Cyclones.

The Cyclones put the dual out of reach for Providence, as Huddleston pulled out an 8-1 decision over Dougie Swanson and Kraisser won by forfeit at 157 and 165 pounds, respectively. Schmidt also pulled out a decision victory against KJ Swanson in the 174-pound weight class (9-4).

Broderson followed up with another pin against Providence’s Alan Badley at 184 pounds in 3:57. Bastida continued to dominate the 197-pound weight class by pinning Liam Swanson in 3:43.

Schuyler ended the night for the Cyclones with a tough win against Kc Buday in the heavyweight division. Schuyler put on the pressure late in the third period with a few takedowns to put the match away with a 18-6 major decision.

After the dust settled, the Cyclones finished the dual with their second straight 49-0 shutout.

The Cyclones planned to face off against Utah Valley on Jan. 23, but the meet was postponed due to COVID-19 developments within the Utah Valley wrestling program. The Cyclones will take the mat next against North Dakota State at 2 p.m. on Jan. 23, at Hilton Coliseum.