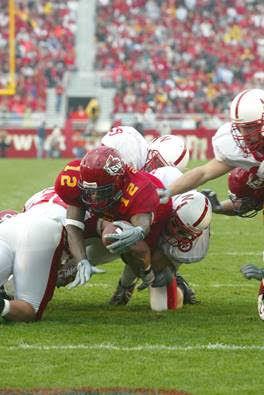 Last week, Iowa State ended a 12-year drought when it got ranked in the AP Top 25 for the first time since 2005.

Tomorrow’s game breaks a streak even longer than that; it will be the first matchup between two teams in the AP Top 25 at Jack Trice Stadium since 2002.

The 2002 season was a rollercoaster, and Iowa State finds itself in a very similar position to the one it was in 15 years ago.

15 years ago, Iowa State entered its game with Nebraska at 4-1. The only blemish on the record was a one-possession loss to No. 3 Florida State in the season opener in Kansas City, Missouri.

“It was a lot of hype going into the game,” said former defensive end and linebacker Tyson Smith, who recorded the third-most tackles on the team in 2002. “There was a Nebraska player that went on TV and guaranteed victory. He said they weren’t gonna let us beat them.”

“Everyone had a little chip on their shoulder because we hadn’t beat Nebraska in quite some time,” Smith said. “We went into the game pretty confident and wanted to make a statement, and I think we did.”

And in the 15 years since that game, a ranked Iowa State team hasn’t played a ranked opponent at Jack Trice.

“I think [the ranked vs. ranked matchup] is awesome for the people that have been fans here for a really long time,” said offensive coordinator Tom Manning.

Notice that includes fans, not players or coaches. For the team, this is just another game.

The task at hand for Iowa State against No. 4 TCU will be to replicate the success from that 2002 Nebraska game.

A win would mean Iowa State enters the final month of the regular season in a tie for first place in the Big 12, with the head-to-head tiebreaker over TCU and Oklahoma. The Cyclones would likely move into the top 20. They would control their own destiny in the Big 12 standings.

That, however, isn’t the focus for the coaching staff or the players.

Saturday’s game is huge for Iowa State’s season as a whole and it’s the most meaningful home game in at least 15 years. That doesn’t mean the players can treat it any differently.

Iowa State has shown the ability to take care of business over the last three weeks, and Saturday is another opportunity to do that. TCU is 11-4 in road Big 12 games since the start of the 2014 season, so the atmosphere at Jack Trice may make an impact, or it could be just another crowd TCU sends home disappointed.

In 2002, the crowd at the Nebraska game made a difference.

“It was electric,” Smith said. “Everybody was into it. The student section was going crazy. It was just a different feeling [than other games].”

But the coaches and players are sticking with the same theme; take it one game at a time and worry about what you can control. Fan expectations can’t define the team’s goals.

“We just expect to do well,” Manning said. “We expect that our kids give everything that they can of themselves.”

In 2002, after starting out 6-1 and reaching the top 10, the Cyclones faltered down the stretch and finished 1-6 to end the season.

That, of course, is the challenge for Iowa State going forward. While it’s nice to be ranked in the top 25 in the middle of the season, it’s even better to finish the season in the top 25. Keep that momentum rolling, and Iowa State will be in a great position to contend for the Big 12 Championship and a great bowl game.

“It’s definitely easy to lose track of what the end goal is,” Smith said. “If they continue to keep going one game at a time, basically how they’re doing it starting with the Oklahoma win, they should be fine.”