Campus Conversation provides insights to the classification of hate crimes 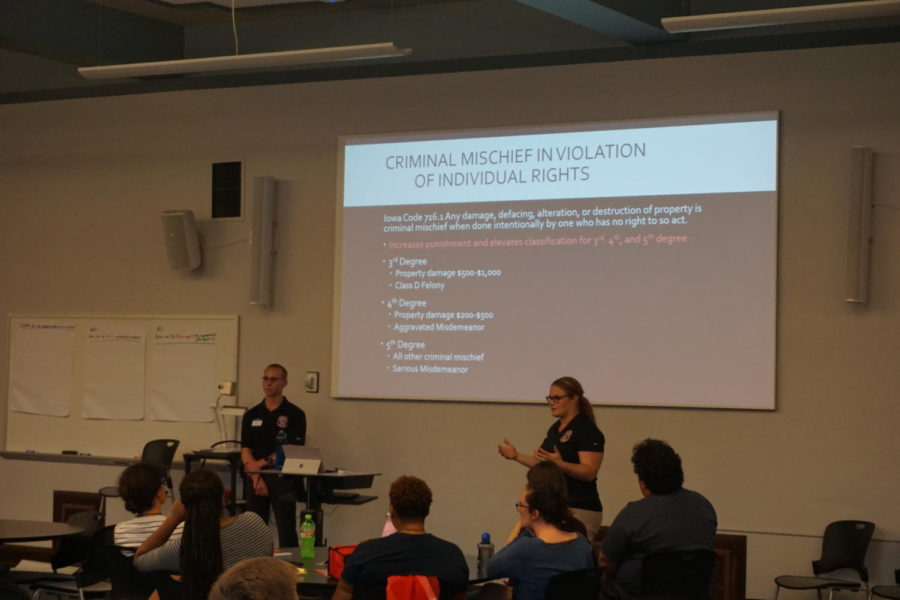 Three questions served as the focal topic of the fourth Campus Conversation Tuesday in 198 Parks Library:

What are your thoughts on hate crimes versus racial bias?

How can we as a community feel empowered?

How can ISU Police Department support the recommendations from the first question?

These questions were a part of the conversation that Liz Mendez-Shannon, project director of Hispanic affairs, needed to happen due to recent racial incidents.

“Partnering with the ISU Police was the logical next step with this work,” Mendez-Shannon said.

The conversation began with a presentation on hate crimes given by Engagement and Inclusion Officers (EIOS), Lt. Josh Hale and Officer Natasha Greene.

Greene and Hale went into detail about the definition of hate-crime law, the non-legal jargon, hate incidents and reporting hate crimes on campus and resources for everyone on campus.

Hale said that the hate crime law states that a person within the state of Iowa has the right to be free of any violence or intimidation by threat or violence committed against their persons or property because of their identity.

Under the hate crime law there are only four crimes that can be enhanced to hate crime status which are assault, arson, vandalism and trespassing.

“In order for it to be a hate crime, it must be committed against a person or person’s property because of the person’s race, color, religion, ancestry, national origin, political affiliation, sex, sexual orientation, age or disability,” Hale said.

Hale said that individuals who are associated with the identities listed in the law, such as a person in a multiracial relationship, can also be affected.

Under Iowa law, gender identity is not included like it is in other states, but it is included in Iowa State’s definition of a hate crime.

Greene said that prosecutors and police officers have to look at additional considerations before they are to make the charges against an individual.

“If somebody is engaging in behavior that’s hateful, or based on hate, and it’s assault or arson,” Green said. “We obviously want to make sure they are charged with the most appropriate crime.”

Greene and Hale also spoke on hate incidents, which are comments, incidents or behaviors motivated by bias or hatred toward individuals and or groups.

Greene said that it was important to mention the incidents even if they didn’t qualify under hate crime laws, because they impacted ISU students and the ISU community.

Greene said even if the the incident isn’t considered a crime or if it is protected by free speech under the First Amendment, doesn’t mean it isn’t based on hate.

“We recognize that those are clearly impacting our community,” Greene said.

Hale said, for example, an Iowa State student could commit an action that may not violate state laws, but could be a violation of the Student Conduct Code.

“Just because [Iowa State Police] cannot file charges, doesn’t mean the university can’t have some type of action in it as well,” Hale said.

Greene said that she and her colleague understand that not everyone feels comfortable talking to police based on their identities and experiences, but Greene stressed the importance of using campus systems to report incidents.

One of the resources that Greene mentioned was the Campus Climate Response Team, which was created by the university.

The duties of the team are to plan and implement strategies for appropriate responses to campus climate incidents and determine appropriate action and outreach steps after an incident.

The team is composed of individuals from university offices including the Office for Equal Opportunity, Office for Diversity and Inclusion, Dean of Students, ISU Police, Senior Vice President and Provost, Office of Multicultural Student Affairs and Department of Residence.

“They’re planning and implementing a lot of different strategies before incidents happen to see how we can address things better on campus,” Greene said.

Other resources mentioned were OneIowa, ACCESS and Transformative Healing which all have resources for those impacted because of gender identity.

Hale mentioned how a victim can be heavily impacted by hate crimes and incidents. Hale said that many victims do develop emotions similar to other victims of different crimes, but many hate crime victims see higher rates of depression and Post-Traumatic Stress Disorder (PTSD).

“They were targeted for who they are, not a ‘wrong place, wrong time,'” Hale said.

Hale called hate crimes “message crimes” for the community and that hate crimes lead to a lesser sense of connection within communities, distrust of local government and police, heightened sense of fear and hyper-vigilance.

For reporting hate crimes, the officers encouraged for the police to be called when the incident is taking place or right after it occurs, or to file a report.

Hale stressed the importance of contacting the Office of Equal Opportunity for individuals that interact with the university.

“When in doubt, contact the Dean of Students Office,” Hale said.

Michael Newton, assistant vice president and chief of police, said that with conversations happening, people will give the police department a sense of their concerns.

“We’re hoping from listening to people and hearing those [concerns] we’ll be able to put some solid foundations on some things that the police department can do to help some folks.”

“It takes both of us, it takes the community, it takes the police department to really figure out what are the true issues our campus is facing and how can we as a team fix that,” Newton said.

Newton said that a new campaign, “We Care,” was adopted to get people to tell the department about the things happening within the campus community.

“Sometimes we hear things in session like this we’ve never heard before,” Newton said. “That was a part of our goal with helping sponsoring this. Are we going to hear some things that we haven’t heard before because the community feels more relaxed, more comfortable in that setting.”

Hale said that having the small groups were helpful and eye-opening in hearing people’s experiences because Hale is unable to see all of experiences all the time.

“Maybe people can work together and try and get some of the deficiencies changed,” Hale said.

Hale said that the current hate laws that exclude gender identity need to update with it included, because he sees people attacked due to this kind of hate.

Hale encouraged people to reach out and talk to the police department to improve on transparency. Hale stated how the department provides ride alongs for people to come see what the officers do and what it’s like for them.

Hale said that the police department wants to be as engaging to the community as they can, and conversations like Tuesday night’s encouraged the interaction.